Ow, my liver and kidneys hurt

Hey y'all.
I'm still in the Scotia. What a fucking amazing week I just had. Far too much fun to recount but rest assured I have never been on a bender quite like that. 5 out of the 7 nights 'on the Mountain' were very drunk and very messy. I've never met such a friendly, welcoming, hardcore partying bunch of family and friends in my life. It's not the average posse that pretty much has beer for breakfast for a week in a row. Bloody brilliant.
Days were spent with Johns, Ed, Phil and Brim (the latter two I only just met and are wasters of the highest degree, in the best sense) helping clear up the yard and prepare for the wedding, playing keepy-ups and headers and volleys, playing washer-tosser (a quality take on boule using metal washers) and swimming in the lake. Oh and nights were spent drinking. The stag-do went well. Ed broke some-ones door, and Johnsey's boxers are still on the roof of the club in Wolfville.
Johnseys wedding was pretty as a picture. Held in Nancy and George's garden with a big marquee, a pig roast, tears, a hoe down, local hillbillies and a world of alcoholic endeavour. MCing was easy as pie and the speeches were amazing. Phil and Brim, the best men, excelled themselves. By the next day my body wasn't happy though. It all caught up and I was struck with a bout of depression. Mind you, my T-Total vow broke as soon as I got to Halifax last night and we went to visit the Keith's brewery.
Tomorrow I'm hoping to get a bus out to Herring Cove to pull down on some local granite by the sea. Maybe gonna try to hitch down to another spot called Chebucto head for the night (if there is somewhere out of the way to camp/bivi) for another day's cranking. Otherwise there's a friend of Nancy's that I should be able to stay with in Halifax. Then a night and a bit of a day in Halifax again before flying home.
Last night I shared a room with Pete, one of the shirelings who now lives in Dublin. T'was great to have a good catch up and drink the odd beer cos I don't get to see that much of him nowadays.
Anyhoo, I'll catch up and post lots of pictures when I'm back home.
Rave safe now...
Posted by Gaz Marshall at 00:30 No comments: 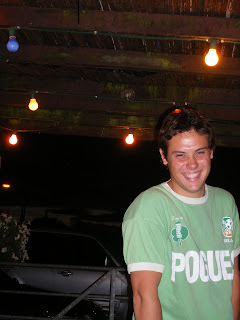 Im excited. I'm flying off to Canada on saturday for two weeks. The centrepeice of the trip is the wedding of one of my best buddies from home life: Tom Johns aka Johnsey.
I've know the lad for a good few years now, drunk many a beer with him, surfed the odd wave, and climbed a good number of esoteric Somerset routes. He's been a ski bum since leaving school over 5 years ago, and is now based in Canada where he is marrying his lady love Lacey Jane Morse from Nova Scotia. Four of us shirelings are flying out to take part in festivities. It's got all the makings of a good old jaunt into the realms of nostalgia and lots of alcohol. Dreamy.

As for the Fort: my car is back on the road with a new clutch. Its driving like a charm now. I'm waiting for the invoice so am not sure if I should be happy with the garage or not!
As predicted, the weekend was very, very wet. Not a huge problem because I sat around and finished The Deathly Hallows. Emotional stuff. I went for a good run on sunday in the pissing rain, over Cow Hill to the Glen, along the West Highland Way and then back up the road from the 'unkown loch'. About 10km and felt good. Just got to keep it up for the OMM. On monday and tuesday (today) I've been bouldering down the Glen after work. I discovered the Sky Pilot area last night. Inspiring to the max. About 40 degrees overhanging all the way. Shit. Lots of strength required for those beasts. But a totally beatutiful place just at the base of the top teir of High Crag, looking out over the ring of Steall, so I'm pretty motivated to get strong! Looking forward to cold, fresh, breezy weekend before winter kicks in with a crash pad, no midges and a flask of tea. Mind you it'll be a while until I'm climbing V9!
Today I went to the Cameron Stone and did NDDB, a V2 next a Jazzamatazz. Its pretty wee but on fairly small holds on a steep wall (for me) so I was pleased. I still can't fathom the mantle at the end of a Dram For Donald (V4), otherwise I can do it!

I'll try to keep you up to date while on the other side.

My car is dead. Long live my car.

Its been a good week one way and another. I've been on a chainsaw course all week, near Lochaline in Morvern. Bloody miles away, but a nice place its fair to say. It didn't rain too much, and in fact it was far too warm some times due to the thick protective trousers, gloves, boots and helmet. Sweaty betty. 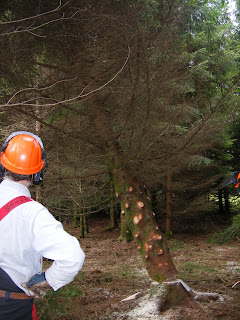 A well felled tree. Nice.
I managed a bit of a boulder on Tuesday night, did a good V3 highball slab under Cavalry Buttress, I forget the name but it was fun, if a bit eliminate. Played a bit on the Cameron Stone too.
Jones came up to the Fort on wednesday eve and its been really nice showing her round. Looking forward to her next visit. Along with my housemate Miriam and her sister, Jones went up the Ben on Thursday while I was cutting down trees. It didn't rain so I think they enjoyed it. It is a bloody boring slog though.
A bad thing happened yesterday when the clutch in my car burnt out (or something like that, I don't know much about engines). Bummer. I had to get towed from Lochaline to Fort William, a 120 mile round trip for the pick up lorry. £70. Shit. its in the garage awaiting work.
That meant no car for the evening when I had hoped to head down the glen with Jones and climb an easy classic route or two. We decided to adventure outwards anyhow and ended out walking across Cow Hill into the Glen, then hitching to Polldubh and back. We did Pine Tree Wall on the buttress of the same name. A very nice two pitch Severe next to The Gutter. It was fucking midgy down at the bottom of the crag and Jones looked pleased to get to the halfway belay with a bit of a breeze. 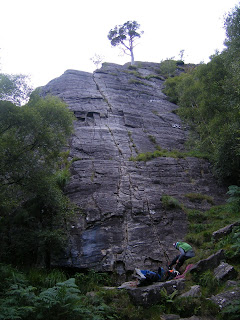 Pine Tree Wall and Jones hiding from the midge: The Gutter is the obvious crack system, Pine Tree Wall takes the left arete and slabs left of the crack. Pitch 2 goes up the skyline ridge.

No dice this weekend. Its been properly shitting down all day. Hopefully the car will get fixed soon and I'll be able to go out a few eveings this week.
What fun.
Posted by Gaz Marshall at 17:12 No comments:

News just in. I just did Maisie Gunn on the Heather Hat. Not groundbreaking I'll admit, but it took some fighting and I'm smug as a bug in a rug. I went down straight after work and lo and behold it pissed down so the finishing holds were wet - bummer cos I'd just worked out the moves! I went for a stroll up to Steall Meadows and went home for tea.

The sun shone as I ate, and, galvanised by a phone call to Jones I decided to head out again to see if the holds had dried. They had! And the sequence worked! Dreamy. Here's a pic of the line, its a sit start from the smaller stones on the ground, then out to the small chalked prow and finishing with a mantle onto the boss/nose. 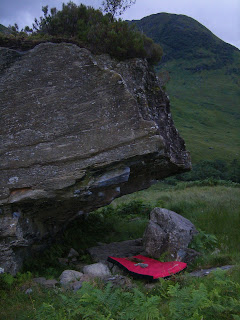 Here are a few pics from the last few weeks: 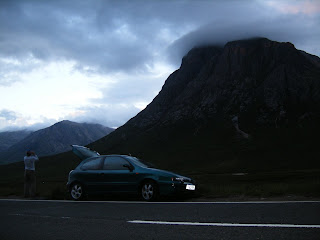 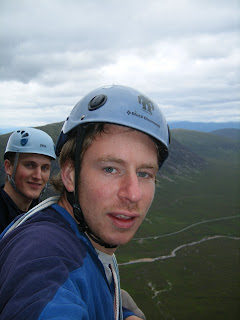 Chris and I above pitch 1 of Crows Nest Crack, the Buachaille 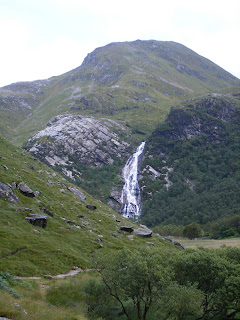 Posted by Gaz Marshall at 21:33 No comments: