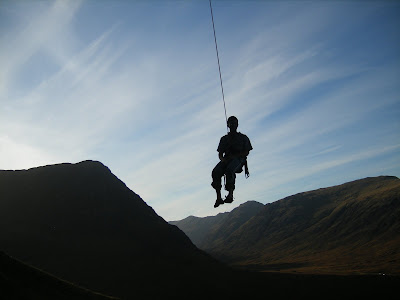 Like most British climbers, I’m a jack of all trades. As the seasons and weather dictate I enjoy my share of rock, snow and ice. Whether it’s a big icy runnel in the mountains or a five-move boulder problem in the glens, I’m a happy camper. However, there’s a problem. I’ve come to realise that there’s a glaring omission in my climbing C.V: sport climbing. You see, I’ve not really done much. I feel that in all the other climbing disciplines I’ve worked hard and progressed and am finally beginning to reach a level that I’m fairly proud of: not so with sport climbing.
To my mind, sport climbing and bouldering are the keys to being a good all round climber. There’s no doubt that being strong on bolts translates to being strong above wires, cams, hammered hexes and tied off screws, and although it might not directly teach you how to deal with the fear that trad and winter provide, knowing that you can hang around, find rests, and do hard moves again and again can only be a huge confidence boost.
So, in my sad quest to be a better climber, why haven’t I done much? I’ve had a think and come up with two reasons. Firstly, the classic excuse: I live in Britain, and there’s not much high quality sport climbing here. To focus in a bit more, I live in the Highlands, and there’s even less of it (although what we do have is generally very good).

Secondly, the real excuse: it’s hard! Let’s be honest, in trad and winter climbing you don’t actually need to be that good a climber to climb at a reasonable standard. In these disciplines there are so many other factors involved besides the physical act of climbing – finding and placing protection, route-finding, dealing with fear, a long approach, bad weather and conditions on the route. Managing all these factors make up such a big part of the day that the actual climbing doesn’t have to be that hard in order to feel pretty involving. In sport climbing there’s none of this, there’s a line of bolted rock between you and the top and all that exists is the physical movement. Being able to keep a cool head miles above your last runner is no help here: you need to be a good climber. And that’s the problem. 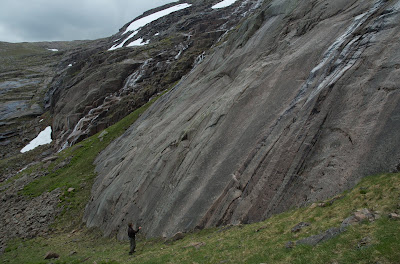 Preparing to headpoint Firestone: Evidently, it's not that hard, you just need to be brave (or daft). Photo: Dave MacLeod. 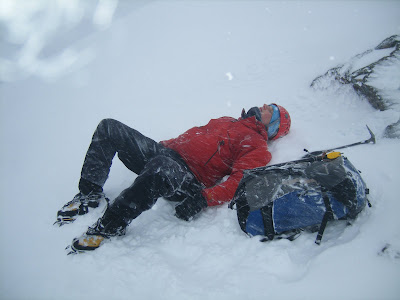 Chris after Number Three Gully Buttress on the Ben. It wasn't the climbing that did this to him, it was the fear, the blizzard and the long approach.
However, I’ve got a chance to try to change. I’m off to Siurana in North East Spain for a week in early December; an escape from the not-yet-winter, and a chance to try hard on the steep stuff, so let’s see what happens…. 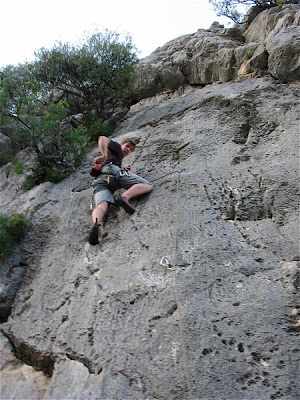 My first (and last) sport climbing holiday, in Sardinia in 2005. I'd only been climbing for a year so hopefully I'll be a bit better this time.
Posted by Gaz Marshall at 12:23 No comments: 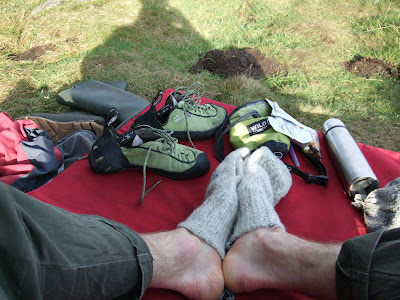 Plus a selection of either:
good skin or lots of finger-tape,
good technique or an excess of strength (preferably both)
good circulation or thermal clothing 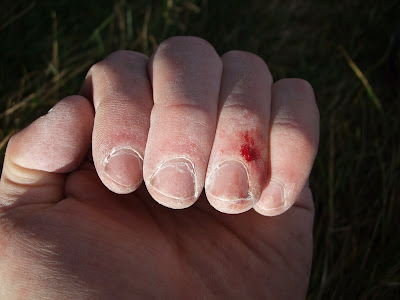 An excess of skin may be handy
Recipe:
Wait for a cool, sunny day in November. Pack all the ingredients into your shiny new car and take them to the Ruthven boulder. Once there, deploy the 2 x Wellington boots for the treacherous approach. At the boulder use a suitable combination of the ingredients to warm up (1 x wooly hat recommended, and possibly exchange the 2 x Wellington boots for the 2 x Five Ten Anazazi Verde rock shoes). When fully warm and stretched unleash the 1 x big dose of motivation for ‘pulling down’ on a boulder problem of your choice (chef’s recommendation: The Big Lebowski). While working on your chosen problem it is important to have regular breaks. At these points 1 x down jacket, 2 x Dachstein gloves, 1 x flask of coffee, large, and the selection of cereal bars, chocolate, fruit, nuts may be used liberally. Once the top has been reached or the 1 x big dose of motivation for ‘pulling down’ has been depleted, pack up and go home, smiling all the way. 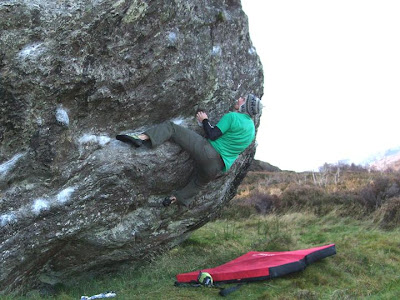 Putting in another shift on The Big Lebowski, Ruthven

The Ice was all around 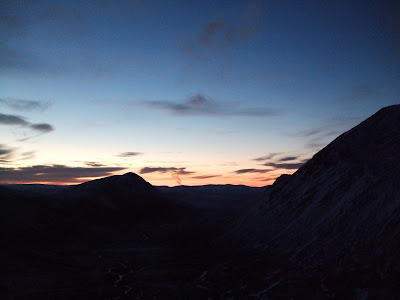 And through the drifts the snowy clifts
Did send a dismal sheen:
Nor shapes of men or beasts we ken –
The ice was all between,

The ice was here, the ice was there,
The ice was all around:
It cracked and growled, and roared and howled,
Like noises in a swound!

From The Rime of the Ancient Mariner, by Samuel Taylor Coleridge. The view to come. Photo: Viv Scott
With the changing of the clocks something stirs in the Highlands. There’s a discernable feeling of the new season approaching; a switching of the gears in readiness for the long dark months ahead. Headlights illumine the daily commute. A torch comes to hand when walking the dog. Jackets and hats and gloves start to make their way onto the hooks in the hallway. The coal bucket fills and empties, the embers glow in the stove.

Then the murmuring begins. Starting low but slowly, slowly gathering and lifting, building to a clamoring gaggle: the expectant buzz. Training and boulders, hilltops and hot-aches, tall tales from times past, big ideas about times to come. Plans.

Where will you be this winter? Posted by Gaz Marshall at 13:42 No comments: