If Not Now: A story about completing a journey

November 2011: bumping along another forestry track in the work pickup with blue green pine plantation overhanging on both sides.  On rounding a corner the forest opens up and across a small valley we were faced with the vast confusion of a recent clearfell; raw trunks strewn at unnatural angles, piles of brash, discarded 'lop and top'.  And there, nestled amongst it all, silver grey, brutish and bulging; something I always dreamed about: an unknown boulder.

On that first visit to Strathrusdale, a long and lonely dead-end strath in Easter Ross, we were counting deer dung to allow us to calculate how many deer need to be culled if young trees are to survive.  On the second day of the survey I managed to engineer my survey route to take me past the boulder.  As seasoned boulder hunters will know, most boulders seem to shrink the closer you get to them, with potential king line highballs on the horizon ending up being shoulder height nothings when you reach them, but this rock seemed to grow, its strange silvery crystalline walls looming out of the felled chaos.  I made a mental note to come back with the cleaning kit to scout it for potential and moved on to the next survey plot.

A winter passed and I finally got back.  It was snowy and the river you have to cross to access from the main track was high. I'd somehow managed to persuade Rich that he needed to come and see this awesome rock and conditions everywhere else must have been shite because for some reason he'd agreed to it.  I fell in the river, which he managed to capture on video (at 10 seconds here), and we gave up early. Rich couldn't see any lines and went as far as to say that he would buy me a beer if I could do a single problem on it. I could see what he meant. For it's size it's pretty featureless, with smooth walls and a general lack of  things to pull or stand on.  But having found this thing I was pretty determined to see what I could do so went back again and managed to climb a vague flake, creating a rather forgettable problem, but earning me that beer:

Somewhere in Easter Ross from Gareth Marshall on Vimeo.

Straight after this I spotted a faint groove that appeared to have some holds in the lower half, leading to a blank wall of crystals, perhaps bypassed by a big move straight to the lip? That would be wild! I pulled on, promptly snapped a hold, clattered my elbow and started bleeding profusely.  Game over.

More time passed and I failed to return.  Which is understandable.  It's at the end of a dead-end road, followed by a 20 minute walk (or 5 minute bike ride) and a river crossing.  If it's been dry you just hop across boulders, but if it's in spate see Rich's video. The next nearest bouldering is miles away in Strathconon, so I'm never just passing by.  Plus, carting cleaning and climbing kit all that way is a right pain in the arse and there's the risk that I'd be using up valuable climbing time to try to climb something that is either not actually possible, or, worse, isn't any good.  So, understandably, I spent my time going climbing elsewhere.  But then, as I've mentioned before, the arrival of our wee boy narrowed my focus dramatically and I decided to use my time to develop local bouldering, so six years later, Strathrusdale came back into the game.

On my first return visit it was nice to see that the brash from the clearfell was starting to decay and that heather and grass were taking over where bare earth and jumbled stumps had been.  Some tree planting had even taken place, with young alders poking their heads above the heather.  The wasteland was starting to feel a bit less raw.  I went straight back to that vague groove and found that fortunately the hold that had broken in 2012 had left a nice diagonal crimp. An obvious sit start to the crimp then lead into the blankness above. The crystalline rock looks like it might provide the odd micro-edge, but on trying I couldn't find anything. Ground up attempts ended here. From a rope I eventually saw that out to the right a small seam had enough shape to make me believe it was a hold for the right hand and it wasn't until a second or third visit that I found a tiny indentation that made a two finger half-pad sidepull for the left.  I reasoned that if I could get into these holds I'd then pop right hand up into a better seam (again, invisible from the ground and found while hanging on a rope) and from there a jump to the lip and glory. Having found the holds, it was just a simple matter of working out how to move between them. And here I hit a brick wall. 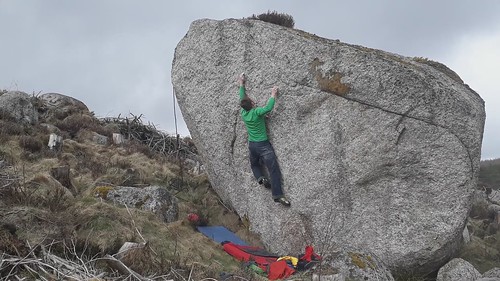 The project
Sessions came and went. Try followed try. Conditions got good, conditions got crap. Midges showed up, skin got ripped. The Process got pretty deep.  After a while I realised the shoes I used made a massive difference in my ability to do one of the moves; rocking all my weight over a small edge in a crack. VSRs were too soft, Magos and Boostics were too bulky to fit into the crack. In the end I had to break out the Instict Lace which are usually reserved specifically for my board.  These indeed were serious times.  Fortunately I managed to keep the spirits up by cleaning and climbing a few other easier problems on the boulder, making use of scoops and curves and random crystal clusters, as well as repeating The Original from back in 2012. 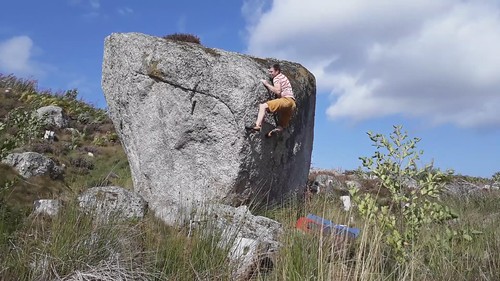 Eventually I made a breakthrough when I decided to trust one particular crystalline extrusion with my right foot and realised that with a jump I might be able to bypass a move I kept failing on and go all the way to the lip and soon I was slapping the lip on most attempts in isolation.  After about 5 session I finally had a sequence!  On the next session I was confident that the project would be dispatched, but the boulderer's best excuse came into full force: conditions.  It had been forecast to be cloudy with a light southerly breeze, but it was in fact sunny and still, and the south facing wall baked in the August heat. Not a chance.

A week later I was back and it was dreamily overcast and breezy.  The holds felt good, I felt fit and my skin wasn't too shredded.  After a few warm ups and an inspection of the sweet spot on the lip I sat and gathered my thoughts.  It felt like I was nearing the climax of a very personal journey that had started all those years ago when I first saw the boulder from the track.  I'd had an inkling then that there could be something fun to do on it and it had burned away at the back of my mind in those intervening years.  After Ben was born in September 2017 I had specifically dedicated the year to developing local bouldering so I was never away from home for too long. In that time I had found and climbed a few half-decent problems but it seemed so fitting that now nearing the end of that year in September 2018 I was close to climbing the one I'd wanted to do for the longest. Taking a last look up at the wall I said out loud, half to the dog who was lying in the heather watching patiently, and half to myself: "if not now, when?"

If Not Now, 7B. Strathrusdale from Gareth Marshall on Vimeo.