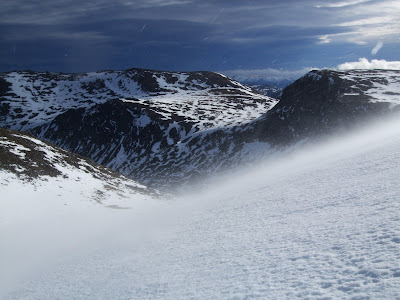 Surreal spindrift hovers above the Cairngorm plateau with a
distinctly spring-like Carn Etchecan beyond.

Mrs James, my GCSE English teacher, didn’t allow anyone in our class to use the word ‘nice’. She claimed that it was a soulless, convenient word, the ready-salted of positive adjectives, and had no place in the rich sphere of literature. That’s fair enough. Fortunately for me, this isn’t my GCSE English coursework, and I’m not analyzing Roddy Doyle’s Paddy Ha Ha Ha! (incidentally, a highly recommended read). My last few forays into the world of winter climbing have been nice. There. I said it. Not amazing, not life changing, nice.

The weather has been particularly cruel to us weekend warriors the last few weeks. To start with, that rare Scottish event; too much snow, occurred. Aviemore was a good few feet under, so I decided to have my token annual attempt to learn how to ski. It wasn’t particularly exciting. I still can’t really do it, and I still can’t see the attraction of spending a small fortune to share the same hillside with hundreds of other folk. Horses for courses I guess. During the week with loads of snow (when I was working), international playboy Sam Loveday returned from a cultural tour of Italy in time to climb 5 classic routes in 7 days, starting with Eagle Ridge on Lochnagar with me and finishing with the much coveted Nuis Chimney on Arran, proving that flexibility is key to success in this peculiar game. If you ask nicely he might update his blog one day.

By the following weekend most of the snow had dribbled down the hill and it was about 3 degrees above freezing in the corries. Never the less, Chris came up from Matlock and we strolled into Coire an’t Schneachda to see what we could find. Sometimes it’s nice to go out with no expectation and to just climb the best looking line. So, while the hordes clamored and fought at the bottom of Patey’s Route, Aladdin’s Mirror Direct and Fingers Ridge, Chris and I had a thoroughly nice time on the most continuous bit of ice around, Broken Gully Direct (III 4). The lack of guidebook stars is a little cruel on this route, but it does say that with good ice it forms an excellent pitch, which it was. It’s much like a mini Comb Gully or Indicator Wall in style, with an icy groove leading to a large open snow field and the top. Most pleasant. 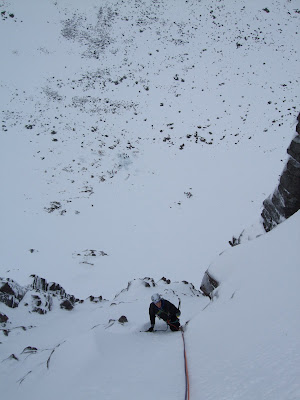 Another week of almost continuous mild weather has seen even more snow lost from the hills. I decided to take my tools for a walk on Saturday morning, splashing (literally) through ankle deep melt-water and slush into Coire an’t Schneachda, under the positively summery crags (with a few teams making dubious ‘mixed’ ascents of thawing gullys), and up the Goat Track to the plateau. Remembering that Hell’s Lum holds ice well I dropped down into the to see what was what. The icy smeer of Escalator (II*) on the right of the crag was still holding on in the warm temperatures so I picked my way up this, avoiding a few thin sections, and managing not to get drenched whenever water squirted out of my pick placements. Nice! Having left the car just after 09.00 I was back by 12.30 and drinking coffee at home by 13.00. Convenience cragging in the , it’s just a shame that it’s all melting. 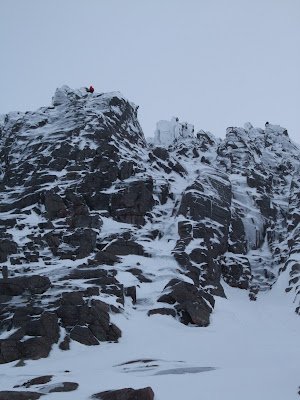 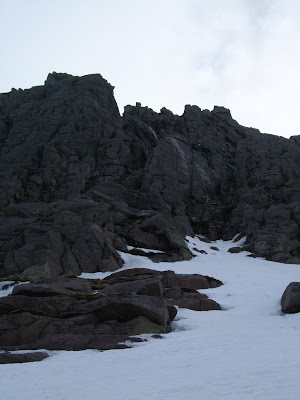 What a difference a week makes:

Posted by Gaz Marshall at 15:30 No comments: 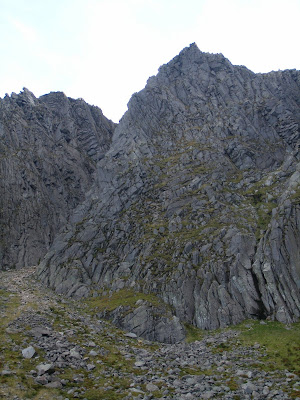 Sundays objective: Eagle Ridge on Lochnagar (in warmer times)
A rap on my window wakes me on Sunday morning. My watch says its just gone six. A light glares into my bleary eyes and I open the car door, letting in a blast of icy air. It's Sam. He's had enough sleep luxuriously sprawled in the back of his big Volvo and has itchy fingers to get up the hill. Squished into the back of my Skoda I don't feel quite as refreshed, but hey-ho, mustn't grumble. Some hastily swigged flat lemonade and an eccles cake later and we're ready for the off and start the stomp into Lochnagar.
The low-friction path is testimony to the recent thaw and re-freeze, boding well for the climbing. As we get higher, finally reaching the col below Meikle Pap, we worry that the fickle conditions might have gone too far, with every protruding rock covered in a thin film of verglas. The mountain keeps us guessing all the way in, the majestic sweep of buttresses and gullies hidden in thick fog. We reach the traditional gearing-up spot of the first aid box and don our war paint and weapons. Last time I was here with Sam was 2006 and he had managed to freeze 'little Sam' on the walk in. He groaned, he swore and he stuffed gloves down his pants, and slowly he thawed himself out, much to the amusement of the rest of us. Now, three years on, I feel that it's my balls that are about to be exposed, and I fear they may not be big enough for the task.
We find the bottom of Eagle Ridge in the mirk of the cloud, the initial groove filled with useable consolidated snow. As soon as we see this we know it's on. No excuses. Man up. As is often the way with these things, the hardest part is deciding to go for it in the first place. Once you've made the choice half the battle is over. It's time to strap it on and get it done. 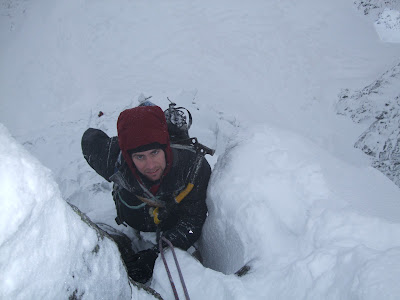 Sam about to squeeze into the Sentry Box at the top of the famous Tower pitch of Eagle Ridge, VI 6 ****

And so we did. Five hours and five pitches of tricky, exposed and thrilling climbing spat us out onto the plateau in a strengthening easterly. Relieved to have climbed my first VI 6, and for it to have been the uber-classic Eagle Ridge, I grin into the gale as Sam shakes my hand and we sort the gear. Wind thrown snow stings our cheeks as we stagger off into the swirling cloud. Back to the valley, back to warm dry clothes and soft trainers, back to my flat lemonade and eccles cakes. 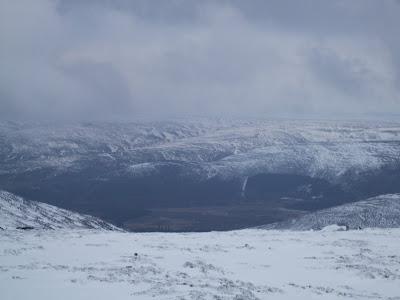 Posted by Gaz Marshall at 16:04 No comments: