The End of the Road

A flat wilderness stretches away to the horizon, scoured and weather-worn. A handful of sorry looking trees hold out under the endless skies, and a cluster of squat buildings huddle around the tiny station house, blasted by the uninhibited wind. Besides the painfully slow rail journey to get here, there’s one tiny road in, one tiny road out, and even they lead from no-where, to no-where. Few come here, and at the ends of the earth, who can blame them.

Continuing with this narrative you’d be forgiven for expecting the entrance of tumble-weed, a cattle ranch, Stetsons and six-shooters, but this isn’t a vision of the American West in the mid-Nineteenth Century, it’s my home for the next month. The tiny hamlet of Forsinard, in the middle of the bogs and mires of Sutherland in the Northern Highlands, is at the centre of a huge RSPB reserve. The Flow Country, as it is appropriately known, is an extensive area of wetlands, lochans, streams, heaths and swamps that stretch for miles and miles, creating a unique patchwork of shifting, seeping, oozing plant-life. 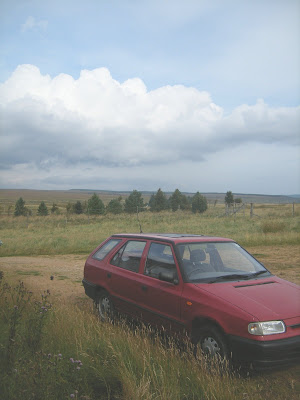 My noble steed, with the flatlands of Forsinard beyond
I’m here to repeat a study that was carried out ten years ago, looking at the difference that a deer fence has made to the vegetation of part of the reserve. A patch of land was initially fenced off, ready for planting for forestry, but was bought by the RSPB before the arrival of any trees. The fence, however, remained for a further ten years, and the lack of attention by deer led to the vegetation growing taller, denser and ranker. Many of the bird species that rely on these extensive bog habitats (golden plover, dunlin, greenshank, hen harrier) prefer open vegetation for breeding and perusing for food in, so the fence came down. With no fence, the resident deer population can get in and graze and trample to their hearts content, getting the vegetation back to its original, open state. With the fence gone for almost ten years, I’m up here to compare the vegetation inside the old fence with vegetation outside the old fence. Interesting, non?

The only problems with my new home are that it’s about a million miles from anywhere, and that, for the most part; it’s as flat as a pancake. It is the Flow Country, so I guess it’s a good chance to perfect my bog-trotting in time for the OMM, but since deer stalking is one of the few sources of income up here, it’s not really advised to go ploughing through the mires willy-nilly. Harrumph. Maybe I’ll just have to run up and down the only road…..
__________________________

Prior to my buggering off up here I managed to keep up a spot of climbing. Jones and I climbed the uber-classic Agags Groove (VDiff****) on Rannoch Wall, Buachaille Etive Mor. It was my first route on this impressive bit of rock, and I’m keen to get back up there. When you look at it, you can’t help but wonder how routes of VDiff and Severe get up it. 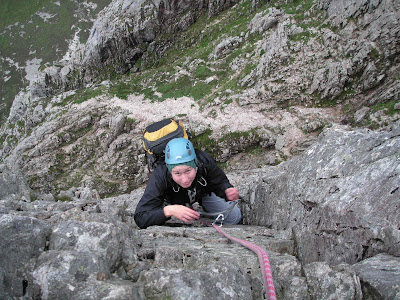 Jones with a lot of air below, finishing Agags Groove
A few days later, Chris and I had a day’s tentative exploration in Perthshire. We started at Polney Crag, Dunkeld and climbed The End (VS 4c, 5a***), which was great, but after that seepage lead to me backing off Twilight (E1 5b**) only a few metres up, and made Beech Wall (HS 4c**) pretty hard because all the good holds were soaked. Despondant, we went for a look at Newtyle Quarry, to see what all the fuss was about. Naturally, everything there was wet and crozzly there, so we drove to Weem, to see what all that fuss was about. Again, we were rather disappointed to find a dank, dirty and dark crag in the woods, so when the rain arrived after a route apiece we weren’t bothered about heading back to Edinburgh. 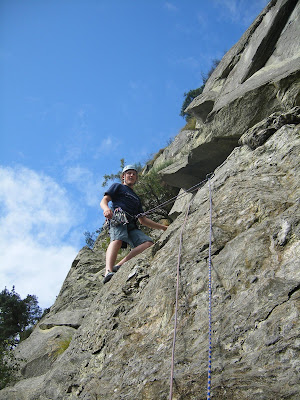 Posted by Gaz Marshall at 12:25 No comments: 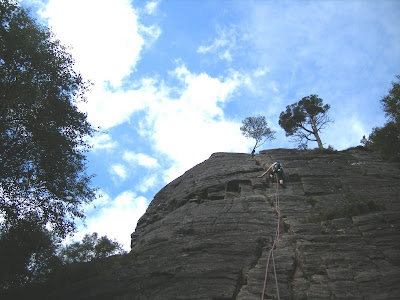 Jones on Pitch 1 of The Gutter, Polldubh
Back to holiday mode in the Fort. I’ve managed to wangle myself another short RSPB contract starting next week, so Jones and I are being lay-abouts in the Crucible in the interim.

I’ve been trying hard to get out and about on the rock, but it’s been proving tricky to juggle contracts ending, moving back to the Fort, the weather, the midge, and maximizing time with Jones before she ships off to Madagascar in a month, so it’s been a case of snatching opportunities as they’ve emerged. Even so, I’ve kept up some mileage.
I suffered from a spree of Munro bagging last week, after a run up Stob Ban in the Mamores Jones and I did the Ring of Steall a few days later. Five Munros in three days. Check it.

Then, on Wednesday I dabbled in an aspect of climbing that’s entirely new to me: head-pointing. Upper Scimitar Buttress in Glen Nevis is a steep 10m slab with an E6 6a, an E5 6a and an E4 6a, and not one of them musters a single runner. Sweet Little Mystery is the E4, taking a line on the left of the wall. Since it has no gear I thought that even if the climbing was OK it would be pretty committing, so some head-games would remain. A likely option for rehearsing the moves and seeing what happens. 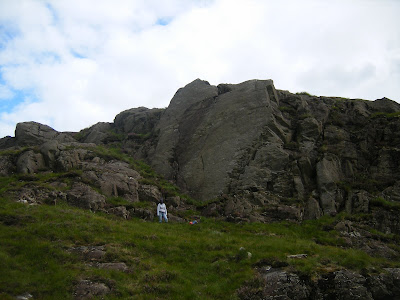 Jones gives some scale to Upper Scimitar Buttress.
I climbed straight above Jones, to the left of the dirty streak in the middle of the slab.
With Jones swaddled in midge nets, Skin So Soft and Deet, I top-roped the line a few times, worked on some of the moves and cleaned some mossy holds (ecologist, moi?). After the initial surprise of finding the climbing do-able (maybe it’s not E4? Maybe I was on the wrong bit of rock?), I pulled the rope and waited for a lull in midge activity. Before long the midges settled down and I was faced with the mental struggle. Was I ready?

From what I’ve read about this kind of thing, and my own limited experience of working boulder problems and the odd sport route, the time when you eventually succeed on something you’ve worked on feels great, the mind clears and the climbing takes over – it was the same this time too. The difference was that the price of a mistake was a large amount of pain, so as I sat at the top and took it all in, the adrenaline started to course, my hands started to tremble and my grin began to widened. So, E4? Obviously, I have no idea what an E4 feels like. All I know is that it would have been a very scarey onsight solo, and wasn’t even sure if I would go for it after the first top-rope. All the moves were within my limit, but would have felt much harder and more precarious without prior knowledge. What ever it was, I’m chuffed. 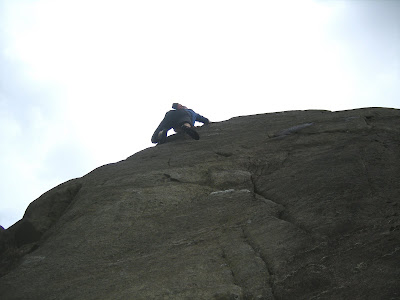 Jones' view of me on the solo of Sweet Little Mystery

Last Thursday was another day in the Glen. Chris and Katy were up from the Burgh/London and we met them at The Alp. Jones lead the great Gutter (Diff***) on Pine Wall, and I climbed Tear (Hard Severe**) and SW2 (HVS 5b** or E1 5c if you ask me….) on SW Buttress. A rare low-midge blue sky day and a real pleasure.

The next time I put chalky fingertip to rock was on Sunday. Jones and I were down in Edinburgh to chill with city-folk, drink expensive beer and laugh at the Fringe, but Steev and I managed to escape the bustle and head to North Berwick Law for a brief session. I had hopes of red-pointing Fogtown (F7a**), which I had tried before. This time I made the tactical error of spending all my energy cleanly top-roping the route, and never got the strength back for the red-point attempts. Bummer. Steev got involved in a fair few routes, including onsighting Anarchic Law (F6a+/6b), top banana. 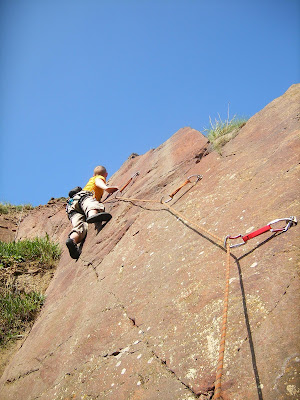 Steev sending Anarchic Law
Back up in the Fort, Jones and I got out yesterday (Monday) and climbed the Heatwave/Vampire combination (Hard Severe 4b,_, 4b, 4a**) on Cavalry Crack Buttress in the Glen. This climbs the first two pitches of Heatwave and the last two of Vampire, making a much more logical line than the two on their own. It was a really windy day, so when we broke through the arboreal verdance above pitch 1 the midges were blasted away and we were left to enjoy the great climbing and amazing rock on our own terms. At last, a route completed on Cavalry Crack Buttress! Afterwards we headed across to Road Buttress and, inspired by Gary Latter’s new Scottish Rock guidebook, I got on The Web (E2 5c**), only to be repelled by the crux a few metres from the top. Despite having a nest of gear, I just couldn’t make a huge span round a bulge and it was sickening to see my chalky prints just centimeters from a good hold when I abseiled down to get my gear. Some you win, some you lose, and some are just graded by lanky bastards. 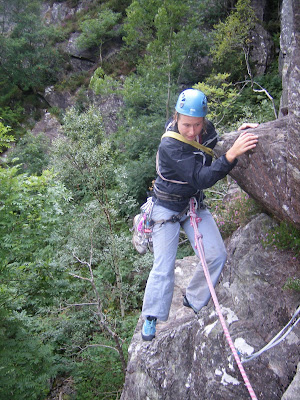 Posted by Gaz Marshall at 13:45 No comments:

If at first you don’t succeed, try, try and try again. Then, when all is about lost, get really drunk so that your hangover renders you incapacitated for any further attempts.

That just about sums up last weekend. On Saturday, Chris and I walked in to Coire an’t Schneachda twice, in vain attempts to climb The Magic Crack (HVS***). Both times it poured with rain just at the wrong moment, drenching any exposed millimeter of granite, and turning any climbing into a misery: queue abseil retreat from pitch 1. Sandwiched between these two attempts we went to Huntley’s Cave and climbed two routes, the first (Jam Crack, HS) in very gentle drizzle, the second (Double Overhang, HVS 5a***) in a deluge. Fortunately, the latter route was steep enough to remain dry, even in the biblical flooding that we experienced, and I’m glad I stuck with it. 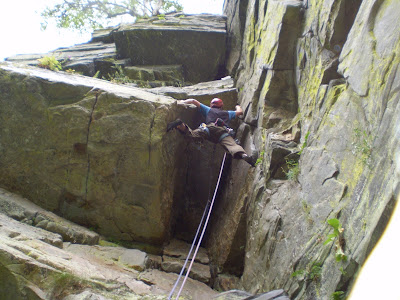 Double Overhang (HVS 5a***) at Huntley's Cave. It's awesome.

On Sunday I worked at the RSPB Abernethy fun day, and proceeded to drink myself silly that night, so bank holiday Monday didn’t turn into the gnarly day of cranking that it might have done. With a forecast pointing west, Chris and I headed to Glen Nevis and climbed the Glen’s longest route, Autobahnausfahrt (VS**), thinking that something easy and long is just as respectable as something hard and short. Anyway, my 4b pitch was about as hard as my fragile state could manage.

The obvious moral message: climbing is daft, I’m off to get liquored.

In other news: my contract at Abernethy Forest is up, so once again I'll be a member of the great unwashed in Fort William. However, fingers crossed, there's something in the pipeline.

Posted by Gaz Marshall at 11:20 No comments: