More of the Same

Just stuck this wee clip up on Vimeo. I went back to Laggan 1 last week and got psyched to see it all dry. The seam in the steep wall to the left of the problem in the video is 'THE LINE' of Laggan 1, but it's way, way too hard for me so I'm keen for someone to come and destroy. There's a project nearby that I'd love to be mine, but how do you stop other folk without being an arse? I guess the beauty is that no-one ever goes to Laggan. For now....

I've still not fired up the trad yet but have climbed more sport routes than ever before at this time of year. The Ticks Ate all the Midges went down quickly at Moy and on Sunday I did the V5-into-F6a 'B-Movie' at Am Fasgadh before falling from the last hard move of Mactalla twice in a row. So close, but yet... Yesterday was the first tick of the year of the stupendously good Stone of Destiny at the Camel and I'm off up there in a bit for more stamina plodding in a bid to train for Mactalla. Hopefully all this sport will make trad feel marginally less stressful when it begins, but I won't hold my breath.

Posted by Gaz Marshall at 16:06 No comments: 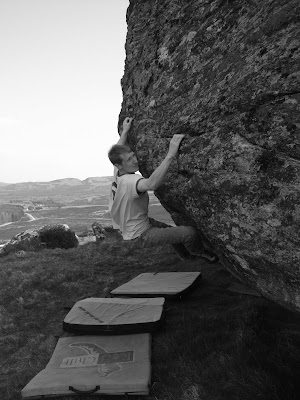 Murdo working Blair's traverse 'Beyond Communication' at Ruthven.
Seems like spring is here at last. Actually, it's arrived pretty quickly this year, with very little snow left on the tops already and lots of plants emerging and migrant birdies arriving for their summer holidays. Today I heard my first cuckoo through the dawn mirk in Strathconon, the welcome springtime alarm melding with the distant bubbling of a black grouse lek I was there to track down. Later, back by the road, I heard my first wood warbler of the year calling through the emerging birch, and yesterday morning we started our survey in Strathbran to the chirruping of the year's first grasshopper warbler. The swallows, swifts and house martins are yet to arrive in decent numbers to Strathspey, but it won't be long now. 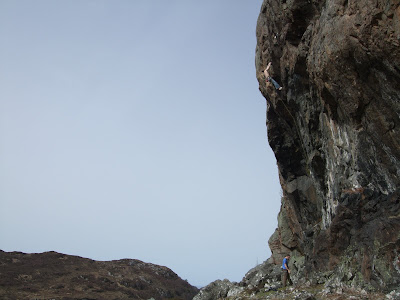 Murdo again, this time on The Joker (?) at Goat Crag.
It's in the warm, dry spells at this time of year that I should be pouncing on the Highland trad routes, before midges and summer rain write them off. Before the onslaught really begins I'm keen to climb the wondrous Mactalla at Goat Crag. It's a route I've known about for ages and had a few quick goes at when it's been dry over the last couple of years but never spent enough time on to get stuck in. It's a fairly sustained wall, so if I can get up it I'm hoping that means I'll have a bit of fitness in the arms. A few weekends back I had my first proper session, falling from the second to last clip on the first go. I was so surprised to be there that I failed to stop at the rest, pressed on and promptly dropped off. Oops. After that it got very hot and slimy so I didn't make any more progress. Now it feels like it's just a matter of getting stuck in. Excited.

On the trad front, I've only had a quick evening session at the mighty Huntly's Cave, climbing the cruxy Diagonal Direct, one of the last of the routes that I've got to do there before having to really pull my socks up. One night last week I met Richie for some Strathnairn bouldering esoterica followed by a wee line at Pinnacle Crag, Duntelchaig. This last weekend the Tollaidh Triathlon got in the way of other climbing. It's such a great wee event, but I'd forgotten quite how uncomfortable cycling is, especially uphill into a headwind. Other than this it's been bouldering, trying to catch up on sleep, wrangling with the lack of climbing partners in Aviemore and working at silly o-clock in the morning. Hard times.
Posted by Gaz Marshall at 14:10 No comments: 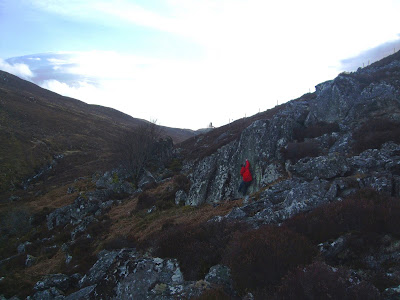 Blair Fyffe on Yellow Wall at Laggan.
I'm back to the dawn patrol, surveying areas of Easter Ross for black grouse. I'd forgotten the amazing sense of privelage you get when you're out in the hills watching the horizon glow and grow with the day's new sun, and the peculiar evocative bubbles and cough calls these birds make as the males strut their stuff to show off for a mate. I'd also forgotten the soul-sinking feeling you get when your alarm whips you out of bed at 0400. Swings and roundabouts.

On the climbing front, the bouldering has been ticking over fine. I've just been visiting local crags between the showers. After the scrubbing I gave Burnside back in January it's looking spick and span. I managed the sit start to Gale Force at Laggan today with Blair Fyffe. I can't grade for toffee, but it bumps the grade up a notch from the standing start so depending on what that was it's now 7A or 7A+. I guess if it goes from a sitter you might as well do it. I had a day getting thrown off Primo at Am Fasgadh with Murdo a few weekends back, but otherwise I've not done much with a rope since the grit. 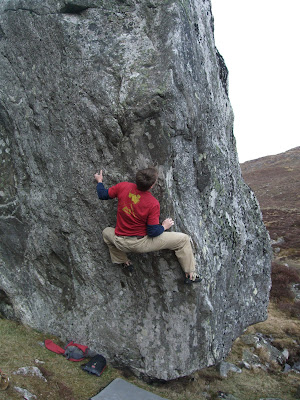 Gale Force going from the sitter. The stand start is great, but this makes for a much better problem. 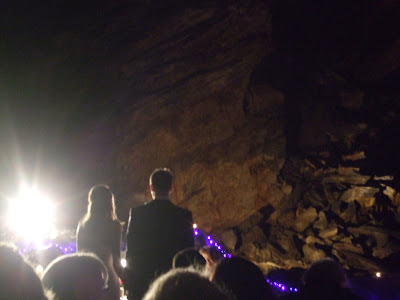 We were lucky enough to be invited down to Wales for Richie and Paula's wedding in Llechwedd Stale Caverns. A very cool place to get hitched and a really good day. Congratulations guys!

Posted by Gaz Marshall at 20:47 No comments: