I know you're dieing to ask: How am I getting on with my wee project of redpointing Whinging Consultants before my wedding on September 12th? Well, it's still a project.  That's the short answer.  The long answer is that it's starting to come together.

I've now had three sessions on the route.  The first was with Tess, on one of our seemingly regular 'it's wet in the West, Brin is the last resort' days.  I'd not been on the route before and was very glad of use of her clip-stick to dog the draws in, otherwise I reckon I'd still be projecting the third clip.  That day I had a couple of tries on top-rope, sussing where it all goes, quite how powerful the crux is, and how easy it'll be to pump-out on the top wall if you can't get much back from the rest.

The second session was an evening after work with Mhairi, and it's fair to say that work that day wasn't hugely productive as I started piecing together the route in my head. I'd not done an evening at Brin before, and what with the Vietnam-style bracken slog it's hardly roadside convenience, but Mhairi had an appointment with One and Only, so was keen.  My aim that session was to work a sequence for the crux and integrate clipping into it.  I guess in that respect it was a success.  It's tedious reading other people's waffle about sequences and holds, but in summary the crux section of this route boils down to working round a roof and having to use a righthand gaston, matching it and turning it into a layback to pull up into a distant undercut.  The difficulty comes from the complete lack of footholds that you really want on the left which would allow you to lean out rightwards from the layback, so instead you're all bunched up using feet straight beneath you. I told you it was tedious. Above the crux there's a half decent rest (only half decent, mind you), followed by easier but brilliant climbing. More importantly, Mhairi redpointed One and Only. 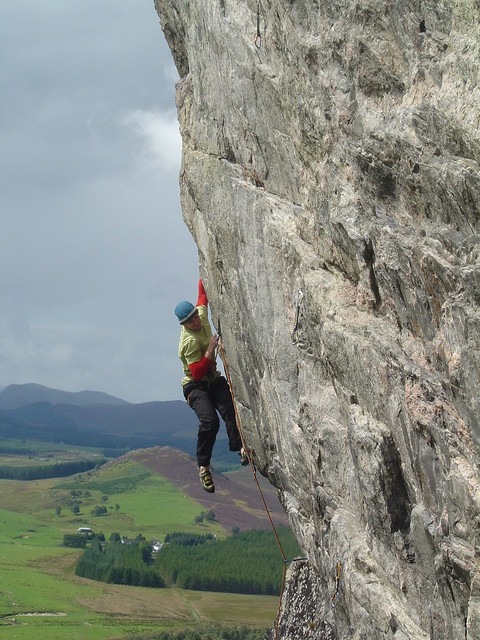 On my third and most recent session I was joined for another post-work jungle-bash up the hill by Andy Moles, a man that I'd last seen throwing shapes in a sweaty tent at Tiree Music Festival. The aim this time was to start redpointing and making links, which I guess could be described as successful too.  There was an initial false start when I found the hardest move impossible despite doing it in previous sessions - having matched the gaston and worked the feet up to turn it into a layback (hooray for dismal climbing chat!) I just couldn't stand up into the undercut. However, Moles was on hand to talk about flagging feet and counter-balancing and I think I've now got the crucial knowledge.  On my third go (first to get the clips in, second to warm up) I linked from the floor into matching the gaston flake, which seemed a million miles away when I think back to my first session nine days earlier.  Just two more moves and then it's a rest. More importantly, Andy onsighted One and Only. 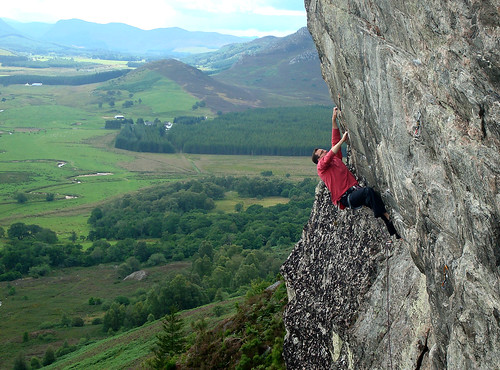 Time was tight this weekend (wedding admin, aka 'Wadmin') but I was all set up for a Saturday morning session but rain spoiled play. I'm lined up with Dr Clarkson, one of the route's namesakes, for tomorrow night but there's rain in the forecast again.  I'll keep you posted...
Posted by Gaz Marshall at 21:16 No comments:

I've heard it said that the temperature in Inverness on midsummer's day this year was the same as on midwinter's day last year. I've struggled to find the data that backs this up, but given the general cold and wet summer we've been 'enjoying' I can well believe it.

Trying to turn a negative into a positive, I've pretty much given up on thinking of going trad climbing this year - a measly 13 routes climbed so far - and I've mainly been spending my minimal climbing time picking the low hanging fruit by filling in the gaps at local sport crags.  At Brin this meant the 7a+ brace of Despicable Me and Vagicil Overdose.  The memory of the lonely runout slab at the top of the latter in a howling gale will last long in the memory.  At Moy Ian T's new Kite Mark (6c) is a worthy Flat Wall addition, and a week or so later I voyaged into the dusty realm of the less-travelled Forbidden Forest at 7a/+. All good fun, but over rather fast.

So what now? Time is getting tight before our wedding in September, and after that I expect my mind will start wondering to Torridon and boulders, so I'm fairly limited in my options. So, I've decided to use this pressure as an opportunity to focus on a project. I feel like I've been coasting along over the summer, going through the motions but not really having an aim, so now it's time to change gears. After scouring the local crags I've settled on a gnarly little 7b+ called Whinging Consultants at Brin - brilliantly named after the oft-voiced opinions of Dr Pete Clarkson and Mr Dave Douglas, two NHS employees and active local climbers. I've had two sessions on it so far and it's slowly moving along the spectrum that starts at impossible and hopefully ends in clipping the chains. Time will tell. It's got a really sustained and powerful crux round the 3rd and 4th bolts, followed by a half-decent rest and then easier but pumpy climbing to the top.  If I can make it to the 4th bolt I'm hopeful I'd be able to keep it together for the top, but getting through that crux is bloody desperate.

Ps. If anyone in the Inverness area is keen for Brin evening sessions let me know, I'll repay belays with witty banter, lectures on capercaillie conservation and rehearsals of wedding speeches.  What's not to like?
Posted by Gaz Marshall at 10:03 No comments: