The year ticks by and I'm still chipping away at finding and developing local boulder problems in the hours squeezed between work and family.  I'm fully aware that I'm operating in an esoteric little microcosm, shutting out the real climbing world and concentrating on little chossy rocks that I'm sure no-one else will ever climb, but sod it, I'm having fun.  My little patch northwest of Inverness is never going to be a renowned bouldering destination, but I'm impressed by the amount of stuff out there now that I've started looking for it.

In less than ten minutes I can drive from the house to Rogie Falls just west of Contin, and a short walk takes me to my latest clutch of problems. Years back Rich peaked my interest by mentioning a chossy cave that might be worth a look. I went, I looked.  It was chossy.  But the amount of rock on show suggested that there might be something worthwhile lurking nearby, so I started hunting, eventually sniffing out a wall lurking among the larches and a steep prow hidden in plain sight next to a path. On inspection the wall looked like it would provide three easy problems and a harder highball after some TLC, but I wrote off the prow.  Too easy.

Over the last couple of years I returned to the wall a few times to dangle on a rope and dig out the overhanging moss cornice and brush off the accumulated larch needles, but I'd never got round to actually climbing there. The place sat in a to-do list in the back of my mind, waiting for the right time.

So here we are: time poor but still desperate to climb. To begin with I re-visited the prow that I'd written off and realised that despite being easy it would give lovely climbing, so I scrubbed the top-out and lapped it up: Rogie Prow Font 4 or 5, or something.  While doing that I spotted another line to the left, scrubbed it and climbed it: Rogie State, maybe nudging 6B from a snatchy sit start. 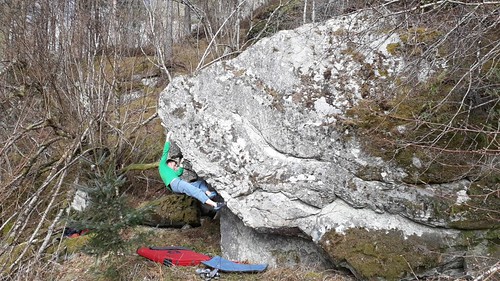 Then over a couple of visits I climbed the three easier problems up on what I was calling Rogie Wall: the right arete at 6A+ (aka Right), the blocky central crack at Font 5ish (aka Middle), and the wall left of the crack at 6A+ (aka Left). Good names, eh?  The latter problem in particular climbs really nicely, and they're all high enough to make you not want to fluff the top. 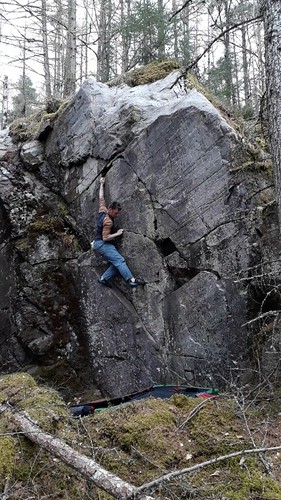 But the main event was still to be done. The left side of Rogie Wall rears up higher than the right side, gently leaning in the top half and with holds petering out with height.  Annoyingly, there's often a dribble of seepage wetting the top holds and it's a bit higher than you would really want to be skiting off unexpectedly, but this long dry spell has sorted that out.  I knew that now was the time to strike and after a couple of sessions Awake but Always Dreaming emerged.  It's probably only about 6C, but as is the way with highballs, when fear starts to creep in it feels a bit harder. It's definitely one of the best problems I've done in this recent wave of local development.  If anyone fancies a shot, give me a shout and I'll send you directions. 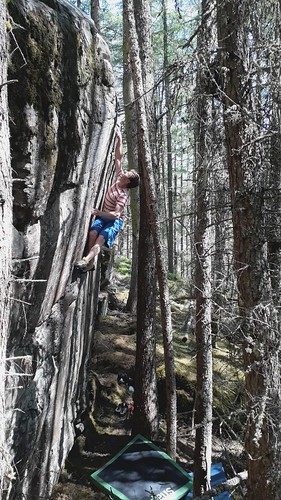