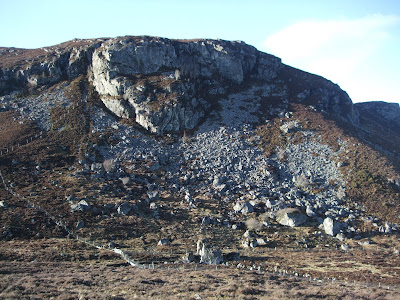 I had the pleasure of some company at Laggan 2 last Saturday. Aviemore Tom and Edinburgh Chris came out to see what I keep banging on about and I think they were pleasantly surprised. Chris did a sterling effort patio-ing the boggy base of The Dock Block and diverting a tiny trickle around it, providing a good landing to Laggan’s best and worst named problem: Trowel Moat. Oh yes.

Sunday was a Torridon day. I finally managed to do the original version of Slipstones Thing after putting a hole in my finger on it last time round. I still can’t do Malc’s Arete, but I’m hitting the dish every time now. Just a matter of holding it. Oh, and then doing the hard bit. Hmm.

This weekend was a good one. After a mid-week lantern session at Laggan 2 I was armed with the beta for the start of the king line, Gale Force. I saw Mike Gale do this a few years back when there was a bit of an Aviemore scene exploring the local boulders, hence the name. In my memory he made the top bit look easy, but it's far from it and took me a fair few lobs from on high before I unlocked it's secrets. It's definately the hardest and best problem at Laggan to date, until someone strong cleans up (in both senses) at Laggan 1.

Now I'm just in from the first venture into sport routes for the year. Mactalla at Goat Crag was seeping most of the day but the brilliant Hydrotherapy was in great nick and I was surprised to do it on my second proper go. My flash attempt ended with a good lob, deep pump and slight nausea. Roll on the spring.

I've been meaning to upload this video of Murdo Jamieson repeating The Essence in Torridon for ages, so here you are Murdo! I've just opened a Vimeo account so I'll start uploading a load of old videos I've got lurking on my hard drive on it. It's here.

Posted by Gaz Marshall at 16:34 No comments: 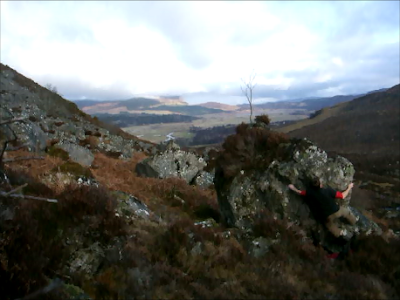 A video still from Laggan 2: Gunfire Font 6b(ish)
Not too much to report of late. I didn't get the job I interviewed for so it's looking like it's back to survey work this spring and summer - really enjoyable work but generally not very well paid. After that, who knows.

I've been trying to train a wee bit since I've had lots of time off so far this year, in the hope of making one or two gains on the rock (a man can dream). I've been mixing up a combination of deadhangs and repeaters, and a few basic strength exercises at home, running, bouldering and circuits at Glenmore Lodge, bouldering on the savage Bettsmaker, and occasional leading at the Grantown wall. Mostly though, I've been getting out bouldering as much as possible.

Cleaning up the local rock has kept me really psyched over these last damp few months. I've started writing up the Laggan boulders but there's still plenty to do down there. At Creag Ruadh, aka Laggan 2, aka Laggan South, I've counted about 20 problems that have been done or are waiting to be done, all weighing in around the Font 5-7a grades - the makings of a really nice wee circuit. I've still not fully explored the crags above the boulders so there might well be more.

Despite visiting it first, I've not done as much at Creagan Soillier, aka Laggan 1, aka Laggan North, but I think that's where there will be more harder problems.

Anyway, here's a few more pics from some of the Laggan 2 problems: 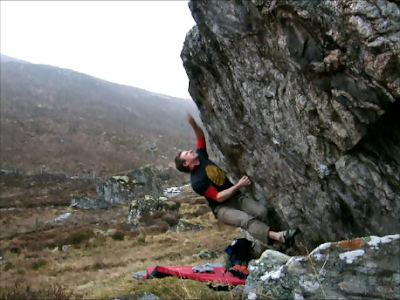 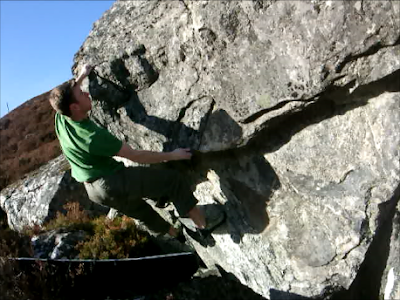 The Detail, Font 6a
Posted by Gaz Marshall at 18:04 No comments: