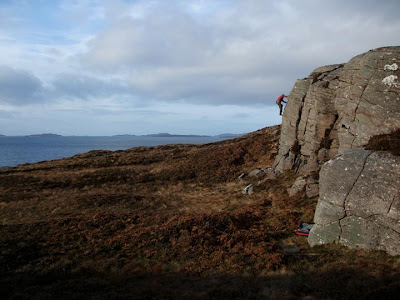 Soloing at Rhue.
This would be a three-star classic in the Peak, but here it's just another lump of rock. I like that.
On the sub-optimal wintry weekends of yesteryear I'm pretty sure I would have been out and about, trying to find something to do in the hills: freezing, getting lost, getting wet, climbing part of a mediocre route, only to get home and rave about having a good traditional day. Deep down though, I knew that for such a vast expenditure of effort, not much had been achieved and after several weekends like this in a row I would generally lose my motivation for winter climbing and start waiting for spring. As I touched on in the previous thrilling installment of Soft Rock, I've decided to take a different approach this year. Winter climbing is no longer at the top of my agenda; having good, productive days out is now number one. So, if winter conditions are primo and the weather is looking good, I'm all for getting out, but if I think I'll get a bigger pay-off by concentrating my efforts elsewhere, that's what I'll do. It means I'll climb fewer winter routes than normal, but hopefully it'll mean that I'll be motivated to try harder when I do.

With this is mind, a quick blast at Cummingston on Saturday followed by a boulderers alpine start on Sunday (8.00am) got me up to Inverness to meet Richie Betts. From there we hit the road to Ullapool and the Torridonian sandstone of Rhue. Richie has got to be one of the most active Inverness climbers, famed for traipsing around Scottish bogs with mats, tarpauline and wellies, in the hungry search for likely boulders. By his own admission he's not into winter climbing, so instead of joining the queues in the corries, he's always out exploring the quiet rocky corners of the North West. Besides being super keen also he's quite handy, so a useful guy to know. By happy coincidence we met the local team of Ian Taylor and Tess Fryer at the crag and a productive day of failing, sending, gossiping and coffee-drinking ensued. Better than sitting in a blizzard any day.... 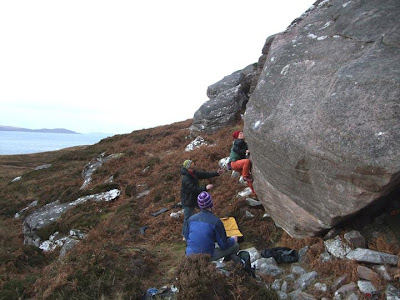 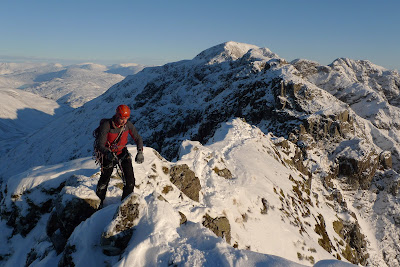 A return to the Aonach Eagach ridge
Sit down and make yourself comfortable, I want to tell you a tale.
In 1871, in the town of Whitburn near Sunderland, Lewis Carrol sat down, took up his pen and ink and wrote a poem. Combining old-english sounding nonsense words with ancient mythology he weaved a web of adventure most bizarre, and called it Jabberwocky.
'Twas brillig, and the slithy toves
Did gyre and gimble in the wabe;
All mimsy were the borogoves,
And the mome raths outgrabe.
"Beware the Jabberwock, my son!
The jaws that bite, the claws that catch!
Beware the Jubjub bird, and shun
The frumious Bandersnatch!"
He took his vorpal sword in hand:
Long time the manxome foe he sought—
So rested he by the Tumtum tree,
And stood awhile in thought.
And as in uffish thought he stood,
The Jabberwock, with eyes of flame,
Came whiffling through the tulgey wood,
And burbled as it came!
One, two! One, two! and through and through
The vorpal blade went snicker-snack!
He left it dead, and with its head
He went galumphing back.
"And hast thou slain the Jabberwock?
Come to my arms, my beamish boy!
O frabjous day! Callooh! Callay!"
He chortled in his joy.
'Twas brillig, and the slithy toves
Did gyre and gimble in the wabe;
All mimsy were the borogoves,
And the mome raths outgrabe.
Fast-forward 83 years to May of 1954, and we find a group of pioneering climbers exploring the cliffs of Gearr Aonach, high above The Lost Valley in Glen Coe. Over three days they climb three new routes and, evidently inspired by Carrol's wordplay, call them The Wabe, Mome Rath Route and Outgrabe Route. Before long the cliff they are on becomes known as the Mome Rath Face, and as the years pass more adventurous souls play out their own journeys across it and continue with the poem theme, with routes like Jabberwock, Slithy, Brillig and Gyre. Initial exploration was limited to the summer, climbing the sunny mountain rhyolite, but then on the 16th of February in the cold winter of 1969 two teams opened the crag as a winter venue. On one rope, Hamish MacInnes, Ian Clough and J. Hardie, on the other Allen Fyffe and J. McArtney. Freeze thaw cycles had sent fat cascades of ice dribbling down the lines of The Wabe and Mome Rath Route and the teams climbed these respectively, creating two of the all-time classic ice lines in the Glen. From then on the Mome Rath Face has been a venue for all seasons, often with the winter routes following the older summer lines.
These days it's rare that the crag comes into the winter condition of days gone by. Its south-easterly aspect catches any sun going and its relatively low altitude (650m) conspire to melt any snow and ice before it become signigicant. However, in the midst of 'The Big Freeze' that we're currently enjoying, Blair and I decided to go and see how things were shaping up. Tools were sharpened and screws wre packed in expectation of plump cascades and icy tendrils. Leaving the car the night-dark of Glen Coe slowly gave way to the first shapes of dawn in The Lost Valley and as the sun made it's way into the morning sky we spied the crag for the first time. Alas and alack! The ice we were hoping for was no-where to be seen! Obviously it takes some incredible conditions for these routes to form - there wasn't even a hint of ice climbing potential.
Not to be put off, we kept on to the foot of the crag to see what we could find and there was definately some mixed climbing to be had. In the end we decided on the summer Severe called Slithy, taking a system of grooves, cracks and shallow chimneys on snowy rock and perfectly frozen turf. A first winter ascent, we assumed, and fitting that the next generation of the Fyffe family is pioneering winter routes on the same crag as his Dad. We followed the summer line throughout, climbing four pitches with a pokey crux first pitch followed by some fairly sustained turf bashing on the second. The last two pitches were easier but still good climbing on an obvious line and Blair reckoned on a grade of about VI 7, and with his experience, who am I to argue? 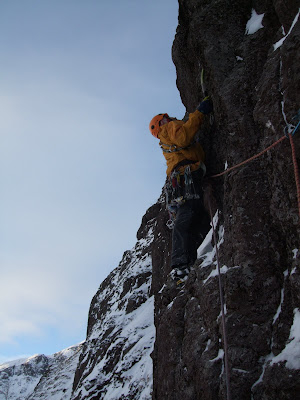 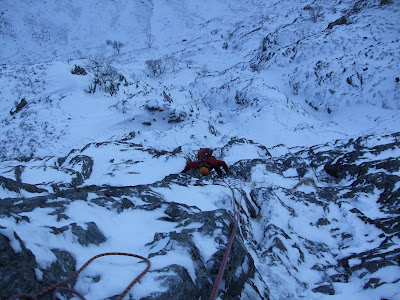 After being denied ice on the Thursday we decided to hunt for it again on Friday, reaching the foot of Blue Ribband on the South flank of the Aonach Eagach just as the sun was rising behind Buachaille Etive Beag and the moon was sinking behind Bidean Nam Bian. Three superb pitches of steep ice and lots of soloing later we found our selves on the pinnacles section of the ridge in the bright early afternoon sun. The last time I was on the ridge I was involved in a rescue after a chap took a big fall from the pinnacles, so it was with some trepidation that I followed along begind Blair. Before long though, we were on the way back down to the car with my demons exorcised. 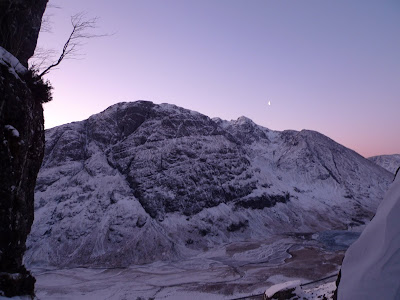 The moon sinking behind Bidean 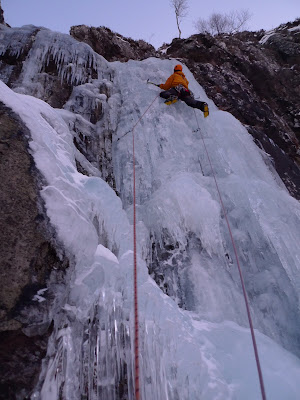 Recently I've been feeling less and less inspired by winter climbing: the thought of going to the same old crags in the same old crappy conditions; racing the hordes of muppets and maniacs that seem to come out at winter; grovelling in powder. Compared to rock climbing it seems so graceless and, dare-I-say-it, pointlessly miserable. However, the last few days of geat weather and this long cold spell have reminded me why I used to love it. Exploration, the bluest sky above the whitest snow, getting away from other climbers to new places and quiet back-waters, and the views, views that no words could do justice to. So, while this good weather stays, I'm back in the game. 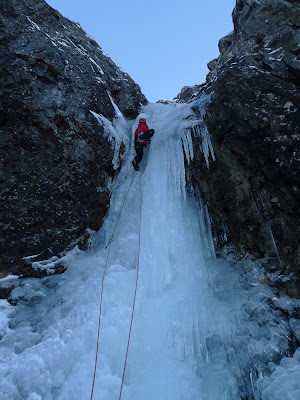 Posted by Gaz Marshall at 10:31 No comments: 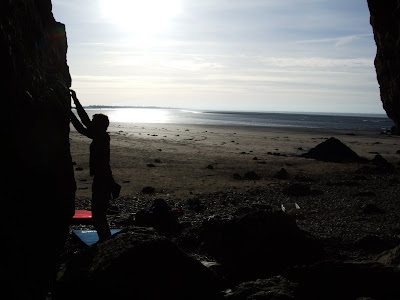 Luke's silhouette about to unleash on One-Eyed Traverse
A trip home to Somerset would never be complete without a few attempts to go bouldering on the lost and forgotten esoterica of Somerset. I normally try a few different crags before remembering that they're all pretty crap for one reason or another: Croscombe and Bourton Combe are dank, dark and green; at this time of year Cheddar is freezing and gloomy; the Toll Road Crags are limited, inaccessable at high tide and the one decent problem there is sopping wet unless there's a drought. After a few hopeful visits optimism gives way to frustration and I either give up and go home to mum's amazing cooking, use most of a tank of petrol and all my skin to go to Dartmoor or go to the wall in Bristol. However, this time round I think I've cracked it.

The answer: Brean Down.
"Where?" I hear you cry. 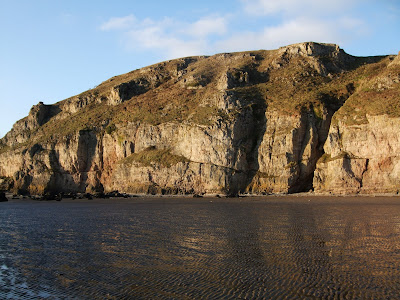 The sun-drenched Brean Down crags.
It's so obvious. Brean Down. A south facing beach-side crag, home to a selection of 1980s 'adventure' trad routes, a handful of quasi-classic sport routes and now Somerset's premier winter bouldering. Maybe I'm getting ahead of myself, but I have to say, even I'm fairly impressed with the wee cove I just found. From now on, whenever I'm visiting the folks, this is where I'll be headed for an afternoon of pulling down. 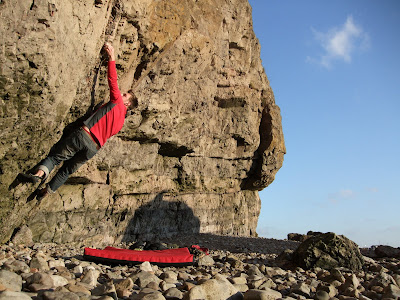 I tried this problem all day long and still didn't finish it. Next time...
Posted by Gaz Marshall at 16:06 No comments: