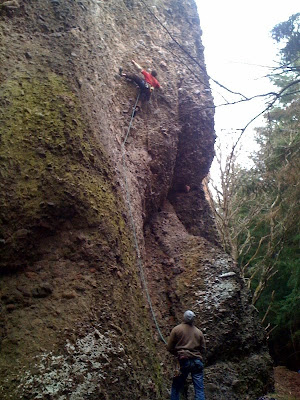 After teetering up the slab it's time to get my pump on on Flux Control (F6c) at Moy Rock
Photo: Duncan Swarbrick

Despite a fairly damp weekend and not venturing far from home I managed to keep the winter/spring rock momentum up.
Since moving to Aviemore in November '08 I've had sporadic attempts on The Big Lebowski, a super-classic boulder problem on the mighty Ruthven boulder. It's a pretty sustained outing and I've never had the juice in the tank to stick with it all the way. However, it seems that this winter of concentrating on the rock is starting to pay dividends as I eventually finished it off on Friday evening.
Saturday saw my first visit to the mystical birchwood of Brin Rock, but heavy showers and a sore shoulder conspired to ruin the morning. Only by slithering up a rather soggy Spank the Ramp was the trip salvaged. It seems like a pretty nice wee venue so expect to see a few more mentions on these hallowed pages.


And then it was Sunday. I joined Brian 'The Bri' Fishpool and Duncan Swarbrick on a rare trip away from Extreme Dream to the sport routes at Moy Rock. As I've only just discovered this place it was really good to get another session up there, to tick a couple more routes and to get a good pump on. I'm off to El Chorro in just less than a month and am keen to get lots done before and during the trip, in the hope that when the inevitable (?) Spring high pressure hits the Highlands I'll be fit and ready for trad warfare.
Posted by Gaz Marshall at 16:14 No comments: 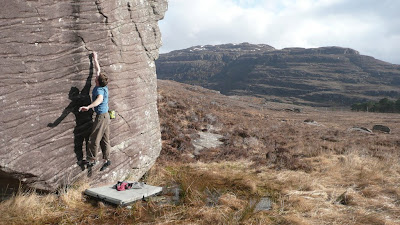 Bouldering on The Ship in Torridon last weekend. Here's me dancing with my shadow while trying the first move of The Mission for the 400th time. Photo: Richie Betts 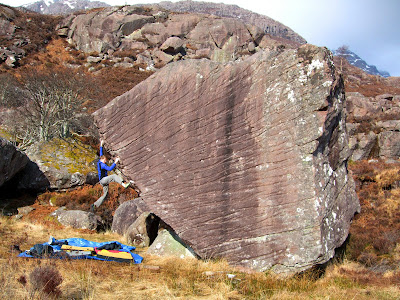 Back in the mists of time my old headmaster, Mr Kirkup, would often end his rousing motivational assemblies with the mantra “remember, it’s cool to be keen”. You had to respect his hopeful attempts to get us to knuckle down and work hard, but the truth remained that being a geek wasn’t going to get the cool kids to like you. No matter how many times you solved for x in Maths or Sylvia Plath poems you dissected in English or one-drop end-point titrations you achieved in Chemistry, if you didn’t wear the right clothes or have the right hair style or listen to the right music the immovable tide of peer pressure would label you uncool. No questions asked.

Nowadays things are a bit different and Mr Kirkup has been proven right. It really is cool to be keen. In the world I inhabit, keenness means you’ll train more, run faster, pull harder. You’ll be willing to get out of bed at 2 in the morning to be first on the route or to bag a second route that day. You’ll want to raise your game and try to overcome harder, longer, bigger hurdles. You’ll be willing to gamble.

With the headmaster’s advice echoing round my head Richie and I drove from the sunshine of Inverness into the dark maelstrom of the West yesterday morning. The further we went, the darker the sky became and inevitably the windscreen wipers morphed from an intermittent twitch into a hypnotic blur. The drive west with a bad forecast is a true test of the keen and the faithful, and many times our dedication was tried. Passing through Garve, we prayed for a wormhole to open and allow access to a sun drenched coast, but no, the mist swirled and the rain poured. Turning left at Braemore Junction, surely we had shown enough tenacity to be granted some blue sky, but no, more rain. Then finally, on reaching Gruinard Bay the Guardians of the North West took pity and made the rain stop long enough to walk to the crag in the dry. And what did we find? 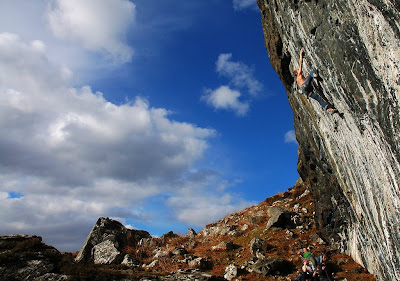 Richie on Black Sox (F7c+) a few weeks prior to his recent success. Photo: Ian Taylor 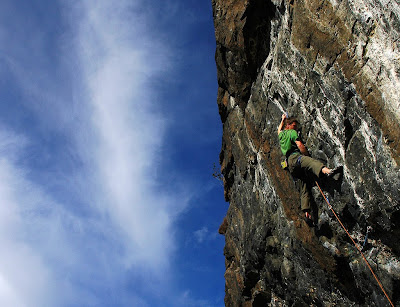 A previous attempt on Warm Up (F7b). Photo: Ian Taylor
And yes, we both came home successful. Thanks Mr Kirkup. 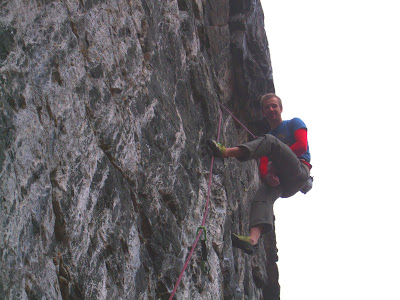 Richie is a happy bunny.

Posted by Gaz Marshall at 11:06 No comments: 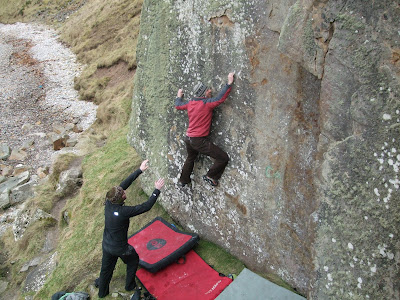 Thin balancy Birdman at Cummingston
It's 7.41 in the morning as I write this, and I've just got back into bed. Yes, you read that correctly. A criminally early start to go climbing in Torridon backfired with pouring rain and warm temps in the car park, so we turned tail and bailed out. What else is there to do than slip back under the covers? What will my re-shaped weekend bring?

It's ironic that in the midst of the longest, coldest, iciest winter for years I'm more motivated for rock climbing than winter climbing, but I know when I'm onto a good thing. Night time temperatures dipped to -18.5 early last week, followed by two foot of fresh powder dumping on Aviemore. All it means is more avalanches for the poodles to set off and more days off from capercaillie surveying. Will it never cease?

Saturday morning dawned, I filled my flask, donned my thermals and down jacket and went off in search of sunny rock with Al and Richie. Cummingston, a.k.a. Cummy, a.k.a. Cummingdale, depending on which officionado you're talking to, was the venue, and with a brisk north-easterly from Norway whipping onshore, temps were perfect for sandstone sloper action. I've bouldered here on my own a few times but have always struggled to work out where the problems start and end, but with Richie 'the knowledge' Betts on hand the dispatching knew no bounds (almost). 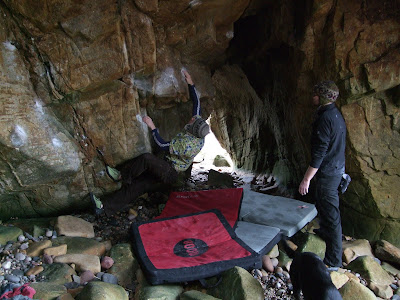 Bringing out the cranking shirt on Little Bhudda

Approximately 24 hours after Saturday morning it was Sunday morning, and once more I was charging up the A9, this time for a day of congomerate pebble pulling. First up we trudged through the snow to the amazing sport routes at Moy Rock. This crag has so much to reccomend it: only 15 minutes drive from Inverness, south facing, long Euro-style pitches, and a good spread of grades. The more I climb up here the more I discover the brilliant diversity of the climbing and having only recently discovered Am Fasgadh and Moy I feel like I've had my eyes opened to the year-round rock route potential. I've got no excuses for being unfit anymore.

In the afternoon we explored the Firth-side Kessock Boulders, contrasting the morning's steady stamina routes with steep power problems. Who says you can't rock climb in Scotland in winter? 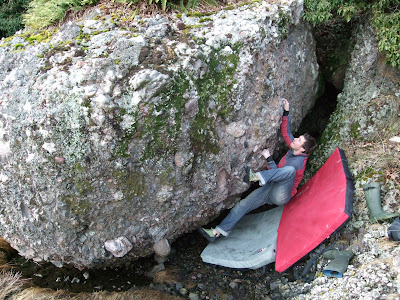 Posted by Gaz Marshall at 14:05 No comments: