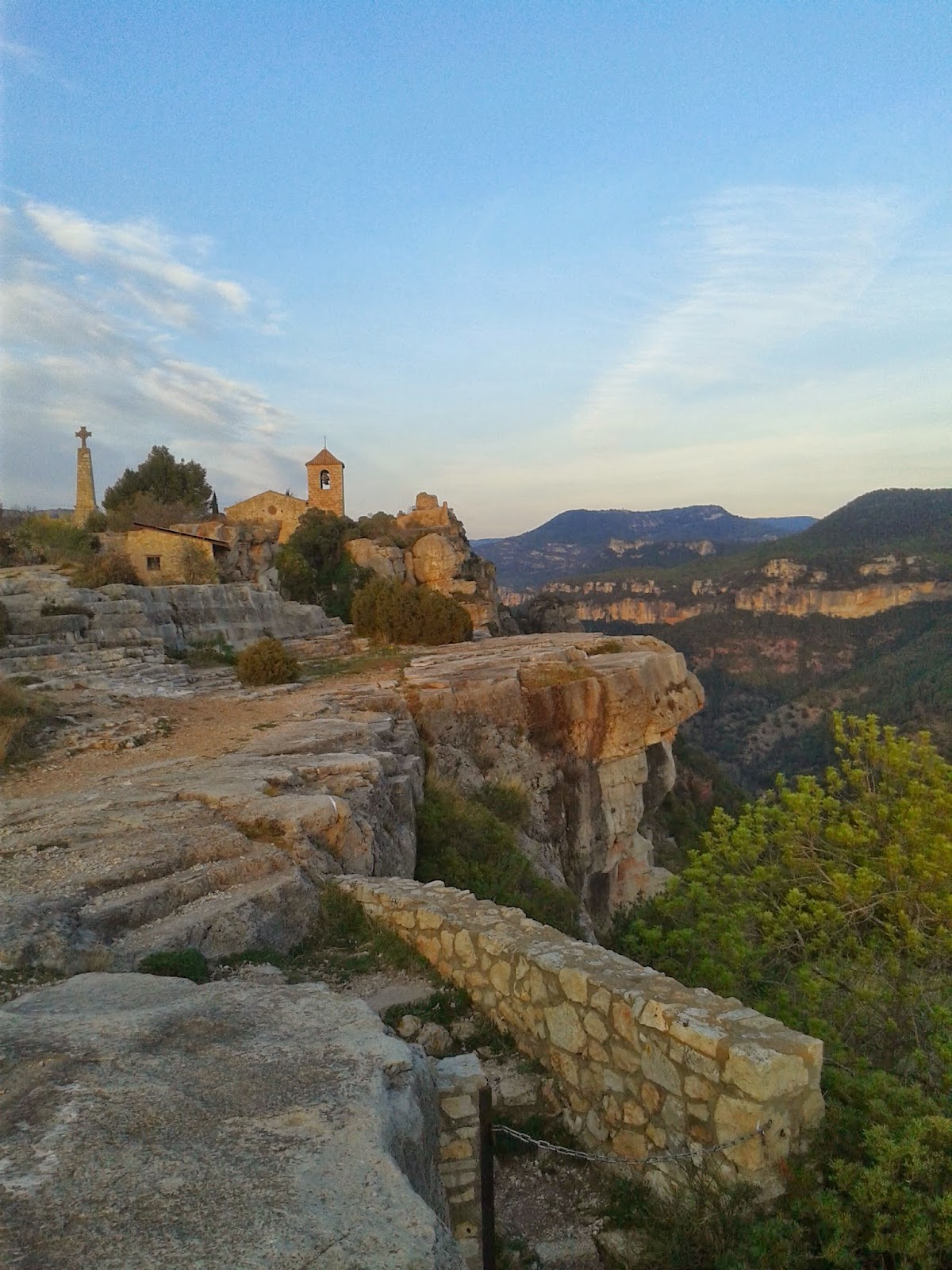 At least, I thought we’d discussed taking it easy on Wednesday:  A trip down to Cornudella, the café, a perusal of shiny kit we don’t need in the climbing shop.

As with every other day, Murdo’s up with the lark, breakfasted and brewed before most folk in the campsite have even thought about thinking about waking up.  Bleary eyed, I stagger to the washroom and play the hot shower/cold shower lottery.  I lose.  I join cheery Murdo as he lights the stove for brew number two.  My back aches.  My fingers creak.  My shoulders ache.  I think I’m getting old.

Yesterday was a good day for me.  I’d onsighted Terra d’ Om, a 7a groove at Ca L’Onassis,  then did the 35m 7a+ Cop de Roc at Can Codolar second go, and rounded the day off by flashing the 7a wall Secallona at Siuranella Central as the sun started to dip towards Monsant.  But maybe now I’m starting to pay.

There’s no talk of rest as I chew my muesli, and before long bags are packed and we’re heading over to Ca L’Isabel by the village.  Well, I might as well try.  I’ll warm up on a nice little 6b.  Except, it’s desperate blind grey rock and it’s all I can do to claw my way up.  Then I failed on the  6a+ next to it.  Not good.  Murdo casually warms up on a 6c+ corner, then after some work on the boulder start does Boys Don’t Cry 7c smoothly.  Hmm.  He’s psyched.  There’s a change.  So it’s down to Piqui Pugui  ‘just for a look’ at Anabolica 8a.  He gets distracted by Souxie 7c+ first, but it’s a stamina beast’s nightmare: burly mono action precipitates  swearing and a retreat.  I try again up a long 6b+ traddy groove thing, just about making the chains but I know when to stop.  Now it’s a rest day.  Anabolica’s free so he gets on it.  More burly pockets.  More swearing.  Another retreat. Maybe now we can pack up and eat cake.

Just one more?  Down to Ca L’Onassis.  I only take my harness and gri-gri to the crag, as a show of solidarity with the cake.  Murdo hops on a good looking 7b but lobs off so he’s got to redpoint.  Second round is a charm.  The boy looks tired now though and is happy to call it a day there.

Next morning he’s up even earlier, keen to catch the morning shade on Memorias de una Sepia, an 8a down at Siuranella Central.  He creaks on the warm up, then gets shut down on the crux.  That rest day is catching up.  Meanwhile, fresh armed (for now) I see off the cracking 7a+ Si vas niquel fas tard.  Who’s the winner now eh?

Off for a week of sunny sport climbing in Catalunya tomorrow.  The bags are packed and Ropegun Jamieson locked and loaded to warm up on all my projects.  Mind you, he'll be weak and feeble after a winter spent shuffling between ledges, while I'll be strong like an ox after months of bouldering.  The routes are only a few moves long, right?  Perhaps not, but it should be a good pre-season arm-stretch for the inevitable long hot Spring and Summer that await. Ahem.

I've been seeing this trip as a book-end to the winter bouldering season proper.  It's been okay, and I seem to have managed a steady trickle of quality problems, but without success on Malc's Arete it can only be considered a failure.  To be fair, good conditions and weather have been hard to come by so I've not been having consistent sessions on it.  But, despite feeling stronger than last year I've not made any progress at all on the move.  C'est la vie.  I think that trying and training for Malc's brought some of the year's successes within reach, so that's cool.

Here's few video clips from trips out this year:

Highland Boulders: Winter 2013-14 from Gareth Marshall on Vimeo.
Posted by Gaz Marshall at 15:00 No comments: