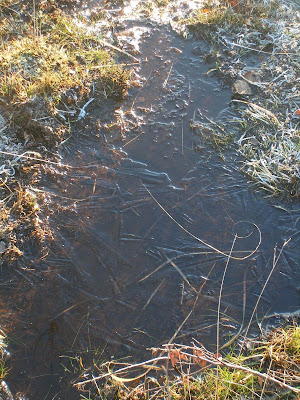 Not much in the way of excitement of late I'm afraid. Most of the snow is gone, so I'm not too worried about getting into the hills for now.

However, its been an absolutely beautiful week up here. In fact, I'm beginning to forget what clouds look like. A hard frost has coated everything white since the weekend, complemented by watery blue skies and incredable sunsets.
Yesterday I was lucky enough to be doing some woodland surveys over on Loch Sunart, near Strontian, crunching through frosted leaves and brushing ice crystals from skeletal heather stems. Not only was it another peach of a day, but its part of an area of incredably old, biologically rich oakwoods and for little old me, fresh out of school, to be the one that gets to stroll round them for a living is quite the privelage. Here are some snaps of yesterdays trees: 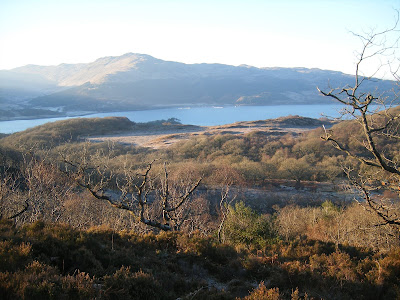 South to Loch Sunart and Morvern beyond 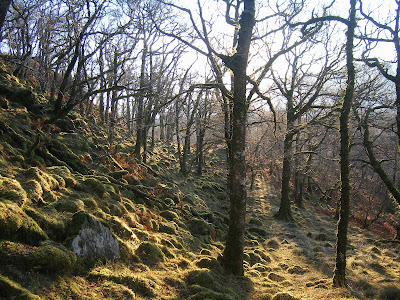 December light filters through the naked trees
Last week I ventured across the Fort William end of Loch Lihnne and was surveying in Stronchreggan, a glen I look into from my bathroom window. The view back towards my bathroom window is a stonker: 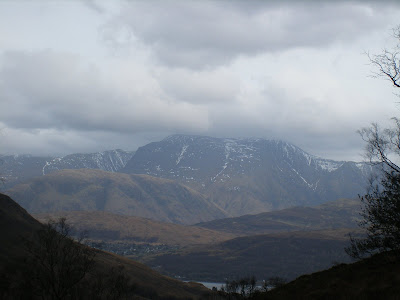 Benjamin Nevis and my house.

Last night I decided to play with some video I had lying around on my computer and came up with the wee clip below. In the past I have mentioned working on the Isle of Canna last Autumn. I was volunteering on a rat eradication project for 6 weeks, and on my days off (when the weather smiled) I went out and scoured the island for rock that wasn't falling down. The only success I had was on Coroghan beach, where the waves have got rid of the worst of the choss. Over a few weeks I did quite a few wee boulder problems, but the best was this one, Pied Piper (rat catching, see?). It's on this weired boulder shaped like a christmas tree, which looks out to Skye and the Cuillin. Happy days.

Posted by Gaz Marshall at 09:33 No comments: 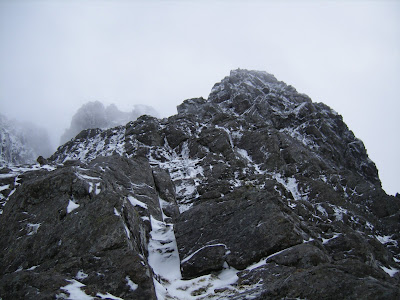 The stage was set.
Bands of low pressure and heavy rain had been passing through Lochaber all week, falling as snow high on the Ben. Every so often the cloud level would lift just enough to show the falling snow line. 700m, 600m, 500m. On saturday the rain stopped and the temperature in town fell. Winds were forecast from the north-east, meaning the norries would be getting the brunt of the ming and the west would (should?) be drier and less wild.
As the drizzle dripped down the windscreen at 7.00 on sunday morning we began to wonder quite what we were up to. 4 degrees at the Nevis Range car park. Hmm, that's not cold. Ach well, Chris and I had been offered a lift up to the top gate with Rob and Martin, so it wasn't much of a loss if nothing got done. Still, we could (should?) have still been tucked up in bed.
With the snow line at about 400m on Saturday we thought Castle Ridge would be a good choice, and a good introduction to mixed climbing for Chris. The guide says it can be climbed under virtually any conditions, so with a good covering of powder it would be pretty sporting.
Problems began on the walk in when we realised that the snow line had risen quite a bit, and that nothing was freezing. Still, it's a longish route so it might be freezing higher up.
We slogged up to the start, geared up and then moved off, deciding to move together until we reached something that deserved pitching.
About 100m later I set-up a belay and Chris joined me on a big ledge, above which the ridge started to steepen. All in all it had been a very disappointing experience. What had appeared as a decent bit of snow from below was only a dusting. There was a smattering of powder on the ledges and lots of soggy turf. Each step cleared the tiny layer of snow, exposing the naked wet grass beneath. What's more, every so often it started to drizzle. This was definitely not winter climbing. After a brief cost:benefit analysis we bailed off the ridge via easy ground into Castle Coire and then back to the track and the car. Strike 1, the first miss of the winter. 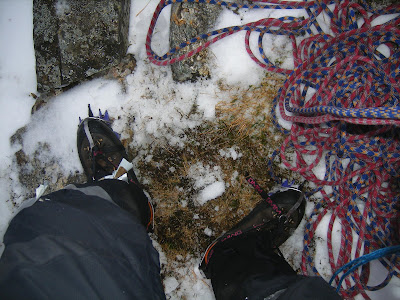 Soggy grass under a few centimetres of snow

Of course, the moral was that we should have headed up high, where Rob and Martin were. They did Strident Edge on the Trident Buttresses, and it sounds like a pretty gnarly route. The problem was that we were after an easier route as an intro for Chris, and there's not much easy mixed stuff up there. 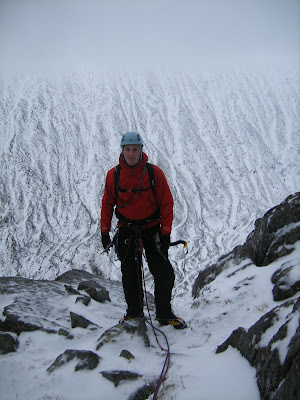 Some you win, some you lose.

Another thing that's really bugging me is this: right now its about 2 degrees in the Fort with clear blue skies and hardly a breath of wind. A nice high pressure is sat over us as I write. I'm sat in the office trying to work (obviously not very hard if I'm writing this), and numerous people I know are up high on the Ben right now. What complete and utter bastards. I'm sure they will all have a good day, tick some hard routes and come back down and tell me all about it.
Living under the Ben is very cool, but having a job sucks. I'm still adjusting to this 'weekend warrior' thing, which is rather inconvenient when winter conditions are so fickle. Also, moving to a new place it's quite hard to get climbing partners because people genereally already have them, and buddies from down in Edinburgh tend to make their plans down there. I guess I'm just going to have to wave my flag and let people know I'm keen.

On another note, I crashed my car on tuesday, which is a bummer. I was going across to Aviemore to meet my boss and must have gone over a patch of ice or something slippery because before I knew what was happening I was going sideways. I slid across the road and along the verge for a wee way, ripping off the bumper and lots of other stuff underneath. Balls. The recovery chap reckoned it was a write-off due to the age and amount of damage. I'm still waiting for my insurance company to pull their finger out and let me know the outcome. Almost a week without a car in Fort William is a pain in the arse, and at the speed the insurance people are working it's going to be a wee while before I get back to the status quo. So, if anyone knows anyone with a car for sale let me know.

I'll never understand the minutiae of snow pack and consolidation. Why is it that given a one metre square you can jump up and down on one bit and hardly make a dent and on another you go in up to your arse? 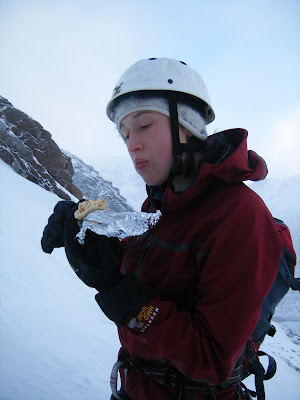 The last few hundred metres of the walk-in in Coire an t'Schneahda on Saturday seemed to go on forever, as my feet seemed to keep finding the soft snow in between the patches of decent neve. Not to worry, we made it to the crag anyway. It was only Jones' second winter route, and my first one of the new season (I don't think Fiacaill Ridge really counts as a route), so we had decided to climb Hidden Chimney on the Mess of Pottage. I was a little concerned about the blackness of the crags, and the amount of bare turf and running water in Jacobs Ladder as we geared up, but thought I might as well have a poke up the first pitch to see how it looked. The first pitch is the first 45m of The Slant, a grade I, so bailing would be fine if the crag wasn't playing ethical ball. I had hoped to do the IV 5 direct start but that was pretty much bare of anything wintery, so that was that.

Patches of cloud were whisked over head at high speed on the stiff breezes that circled and eddied in the coire, and a pale blue wintery sky looked down as Jones snuggled down to her first stint at the belay. I felt pretty excited as I hooked and torqued on anything and everything, uneccasarily swapping axes and revelling in leashless freedom and promptly dissapeared round the corner onto the open ramp of The Slant. There was actually much more snow than I had thought, and much (but by no means all) of the turf was frozen. 45m and three runners allowed me to reach the bottom of Hidden Chimney, a wide, stepped gully-come-chimney. Jones made short work of it all and was soon looking cool and comfy ready for belay duty number two.
Pitch two was a pleasant re-introduction to this bizarre mixed climbing lark, with bomber gear all the way up and some nice tricky little steps. I felt that in it's current condition (no ice and no real snow build-up) it was fairly tricky III, as the wee step before the chock-stone was fairly steep and relied on sexy wee hooks in the sidewalls (what was it I said in a previous post about winter climbers being weired perverts?). 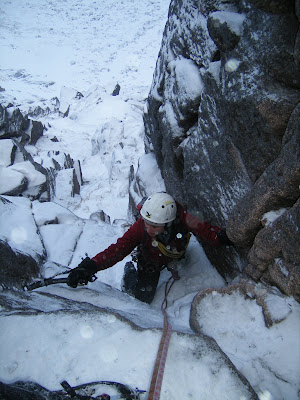 Again, Jones excelled herself and met me at the chock-stone in short time. I was impressed. Maybe she's a gnarly alpinist in the making. Infact, her inner thermostat seems to work in reverse, so maybe she is a natural in the hills. When its boiling hot indoors she's sat shivering with 5 layers, a beanie and 3 pairs of socks on, but when its snowing and she's sat on the belay for half an hour she's positively toasty. Bizarre.

I got her to lead about 3 metres up from my belay on the chockstone to a wee bay behind it so I wouldn't kick her as I made the last steep moves above. A bit of wriggling, a cam, a bomber hook and a swing across the chimney saw me exiting from the chimney onto the final slope up to the plateau. Jones got some funky high-step maneuvres in on this bit as the snow really started to fall. Before we knew it we were stowing the ropes as the wind tried to relieve us of them and scuttling back down Fiaciall a' Coire Cas. 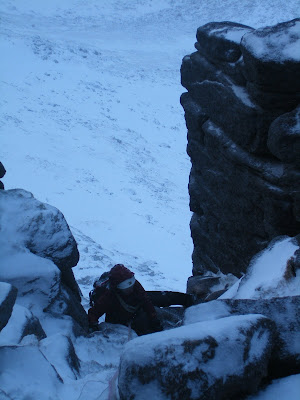 High-stepping into the blizzard: Jones exiting the chimney 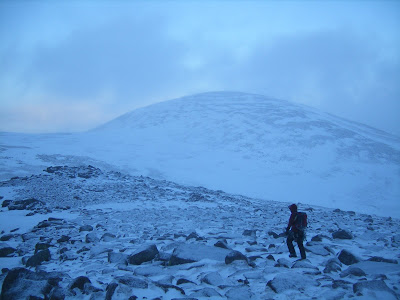 "Run away": Leaving the wind-scoured plateau

A spot of recuperation in Aviemore's Cafe Mambo was just the ticket and before long we were safely ensconced back in Banff Crescent, enjoying tea and tiffin, well, beer and sausage-cottage pie (which is actually pretty good). The drying room heater was doing over-time and we had that smug, self-satisfied glow that only comes after a days rewarded efforts. It's pretty sweet to have got out into the winter snows twice already, and December has only just begun. This Highlands lark isn't all rain and long, dark nights. 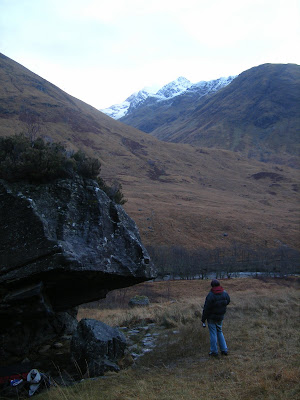 Sunday was spent doing not a whole lot. Jones and I ventured down the Glen as it was clear and dry and I fancied a go on Midnight In A Perfect World. Little did I realise that the combination of the last few week's moisture and the lack of sun in the Glen at this time of year had conspired to ensure everything was wet and slimey, so we just drank tea and admired the view, which isn't too bad. It might mean my pact will have to be aborted, unless we get some sustained high pressure before I head South for christmas. Drat.