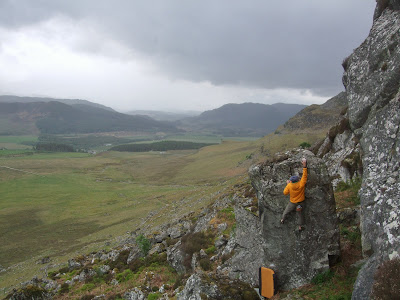 Stevie Johnston nipping up The Unknown Soilleir at Laggan 1 before another band of rain comes from the west.
This photo sums up the last few week's of sporadic activity.
Posted by Gaz Marshall at 11:25 No comments: 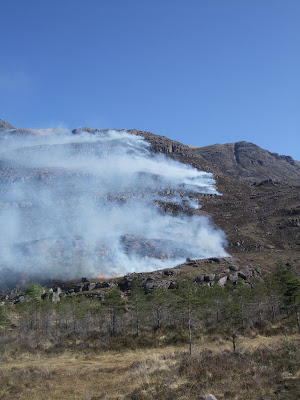 Getting a bit toasty in Torridon.
Was that the summer? I bloody hope not.
The Strathspey weather seems to have fast-forwarded straight through to the horrible sunshine and showers we usually get in high summer. I'm not fretting too much yet, as there's normally a few high pressure systems to play with each summer, but still it sucks. 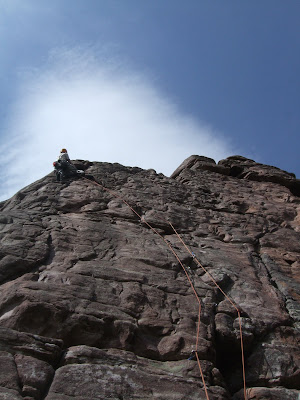 Murdo on Neart Nan Gaidheal at Ardmair.
That old saying about making hay while the sun shines definitely rang true when it did, with desperate flurries of texts going back and forth among the Inverness area climbers, making plans, arranging partners and lifts, checking forecasts. I don't feel too ashamed with the way I used the good weather: finally putting Mactalla to bed, pleasant routes at Seanna Mheallan while Torridon blazed below, evening sunshine at Kingussie Crag, skin-loss and body-pump at Ardmair and shower and midge dodging at the new(ish) sport routes on Creag nan Cadhag, Stone Valley. But of course, just as I'm starting to feel like I'm getting into my stride the rain intervenes. I guess it's a good time to go back indoors to keep up some strength. 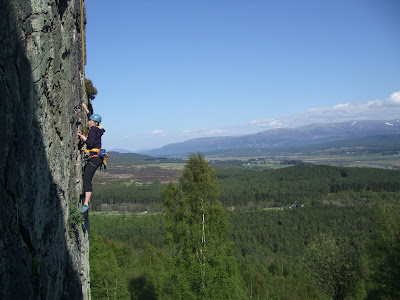 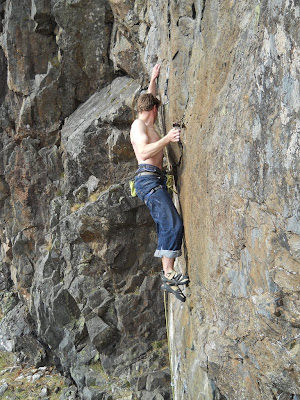 Redpointing Mactalla
(Photo: Murdo Jamieson)
I remember first hearing about Goat Crag when I lived in Fort William. I was climbing with Blair quite a bit, and every so often he’d slope off to the north for a weekend of sport climbing and come back raving about amazing routes, perfect Lewisian Gneiss and the beautiful North West. He also kept telling me about this one route called Mactalla - I would love it and should get myself up there ASAP.
Not long afterwards, Gary Latter’s Scottish Rock North guide came out and I got another glimpse of this place. I couldn’t fail to notice the four stars Mactalla got, and the “one of the best routes of it’s grade in the country” description. The only issue I could see was the grade: F7a+. At this stage I’d only just redpointed a couple of F7as and was pretty sure they were soft touches, so the jump up was going to be a big deal. Never the less, everything about this route seemed like a perfect line to aspire to: the location, the rock, the grade and the reputation it was steadily acquiring. I just needed to get on it!

It wasn’t until the spring of 2009 that I had my first experience of the route. While waiting for wet trad crags to dry in Gruinard Bay I dragged Steve up to Goat Crag for a look. I knew straight away that I'd have a battle on my hands as this was clearly a long, steep, stamina route - something that a slab climbing boulderer isn;t very good at. I played on the first few clips but before long the sun came out and we headed off for some trad routes.
It was about 6 months later that I next went to Goat Crag. I'd hoped to get on Mactalla but it was wet most of the day so I amused myself on the easy warm ups and watched Blair and Iain make everything look easy, and this heralded the start of a period of about a year and a half when I was desperate to do Mactalla but circumstances kept delaying me. Often it seeps in the morning, so quite a few times I got on another route first and was too spanked by the time I tried it in the afternoon. Sometimes I was out with folk for whom Goat Crag didn't offer much scope so we went elsewhere. Sometimes we drove all the way to Gruinard Bay to find it clagged in and raining. Compared to it's neighbour Am Fasgadh it's an exposed icebox in winter and can be a similar baking sun-trap in summer, so I stayed away for big chunks of the year. But during all this time Mactalla was in the back of my mind, niggling away as THE route I most wanted to do. Even last year when I managed the similar and sensational Paralysis by Analysis at the Camel, it was just a substitute and preparation for Mactalla, which was spending the summer dribbling under a rain cloud. My fervour was fuelled all the more by starting to climb with the Goat Crag locals, Murdo, Richie, Andrew, Ian and Tess and seeing them waltz up the route in all conditions and all styles (last time I was there with Murdo he down-climbed it after leading it).
But this spring I decided to get a bit more serious and to be a bit more sensible. I've specifically tried to get as much sport climbing done and tried to get better at falling off and 'going for it' in extremis - being happy taking falls has always held me back, so whenever I've climbed indoors I've made sure that I lead and tried to take a few practice lobs - that sounds like a total punter thing to write, but it's definitely made a difference. A winter of bouldering has meant that I'm moving OK on rock already, rather than having to start all over again after months of winter climbing. And, importantly, when I went to the crag and the line was wet I waited for it to dry and then got on it rested and fresh. Finally, after all this time, I started my redpoint mission about three weeks ago.
On my third visit, after a week of great weather in which I'd clocked up a long stamina F7a redpoint at Moy, two ascents of Stone of Destiny at the Camel and an afternoon of showing some punter called Macleod round the Laggan boulders, and as royal wedding bells rang out across Westminster, I found myself eyeing up the last of the hard moves again. A deadpoint to a good jug, the scene of my previous failures. Gathering myself for the launch, braced for the fall, I squeezed the lefthand crimp, fired upwards, and the journey came to an end.
Posted by Gaz Marshall at 19:58 1 comment: