I heard through the jungle drums a few weeks ago that Farrletter Crag in Strathspey had been retro-bolted, or at least, some of it had been.  I went down for a look at the crag today, and it's true.  It's something that has been discussed over the years, not least on a couple of UKC threads, with strong feelings on both sides of the argument.  Now it's been done and the argument is pretty much over.

I'll start by saying I no longer live in Strathspey so accept that my opinions probably hold little weight, and that this post is just that - my opinion.  I don't want to implicate anyone else or piss anyone off, but I do think it's something that should be discussed and that people should know about - you might even want to go and do the routes yourself.

Farrletter is an odd little place - a steep, North-facing wall of very compact schist, similar to sections of nearby Creag Dubh.  It's very close to the road so easy to access for a summer evening's cragging (if the midges don't get you!).  It's got a handful of routes from E1 to E6, and the nature of the rock means they're often fairly bold (some rely on pegs) and pretty strenuous - again, similar to it's much more famous neighbour.  Some of the routes are fine though, including a very safe E4 crack.  The routes were developed in the 80s and 90s by locals, mainly from Glenmore Lodge.  Being short and close to the road, it seems it's always been treated as a training venue rather than a normal trad crag - as far as I'm aware most people top-rope the routes and they are rarely led, even rarer onsight. I guess this style of route isn't very popular nowadays, especially if you're just after a few laps to keep fit on a sunny evening.  As such, the idea of bolting it to create a sport crag has been mooted on more than one occasion.

As far as I'm aware, arguments put forward by others (taken from my own discussions and UKC 'discussions') in favour of bolting are:

When I first went there in 2009 I think I saw the crag quite differently to the locals.  Sure, there are some pretty bold looking E5s, a few E1s, E2s and E3s with spaced kit, and a smattering of dubious old pegs, but it just looked like a normal crag to me (all be it not a very pretty one).

Over the four years I lived in Aviemore I visited the crag a couple of times a year, onsighting most of the E1- E3s.  I attempted to onsight the very safe E4 Too Farr for the Bear but took the lob from the top and took it again on the second ground-up attempt a week or so later.  I've not been back on it.  I also dabbled in headpointing while it was briefly fashionable with a few locals in 2009, climbing the E5 The Art of Course Climbing after top-rope practice. A friend, who is a far better climber than me, then climbed this route ground-up after falling onto the peg on the onsight attempt.  During this time a new E6 start to one of the older E5s was climbed by Steve Johnston.  All these routes were spicy little challenges, requiring as much mental endeavor as physical to do them - the essence of trad climbing.   The point I'm trying to make is that to me, it's just another trad crag, with hard routes that I won't touch, and easier routes I'm happy to attempt onsight.  Just like Stanage, or the Shelterstone or Sheigra. There are hard or dangerous routes all over the place and if I don't feel up to leading them, I don't.  Perhaps I'm an ethical elitist, perhaps I'm an idiot.


My rebuttlal to some of the points put forward above would be:

So, personally, I think Farrletter is an already established trad climbing venue and shouldn't be retro-bolted. By not seeing it as a training venue but as a normal trad crag it has provided me with some great climbing experiences - spicy and serious but memorable and rewarding.  As a sport crag it will provide some pretty mediocre 10-15 metre long wall climbs on a north-facing, dark, dank crag.   But I guess that's pogress.

After my soul searching day in Torridon I went out to a nice wee boulder I'd visited once before above Achnashellach in Strathcarron, gave it a wee scrub, tried hard on some lovely rock and had a jolly old time.  Funny how perspective can change so fast. 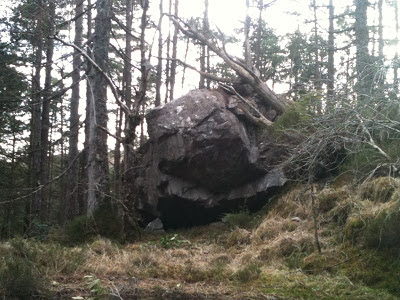 When I first went there a few weeks ago I couldn't for the life of me work out how to do one move on an otherwise really cool and obvious problem..  This time, however, I came up with a very peculiar and painful knee/shin bar, using an old tea towel taped to my leg as a makeshift pad.  I think it might be the future of hard bouldering. 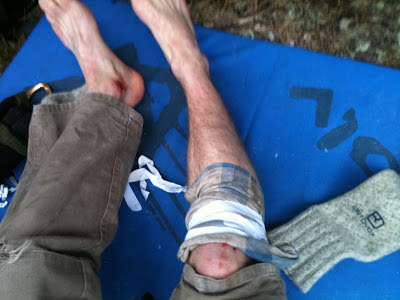 In the past I'd be keen to shout from the rooftops about finding a new boulder and doing new problems, but this time I'm just happy to have been to such a cool place and to have my own wee tussle.  I put together this little film of the problems, and bolted on the thing I did in Torridon on Sunday.

I passed up the chance to have a sociable day swinging from bolts at Am Fasgadh to go to Torridon on my own.  Malc's isn't going to climb itself.  But even before I left the house I knew nothing had changed and that conditions weren't likley to be great.  The seeds of doubt have started to sprout into seedlings and saplings.  I went anyway.  Between weather and other things I'd not been out to the Glen for three weeks. I've had a few quick blitzes on Rich's board and at Alien 2 in Edinburgh, and a few deadhang sessions in the brief spells back at home, but doing more days in the field at work and the lack of contact with rock left me feeling sluggish.

So, arrival at the Ship. A cold, strong Easterly is determined to steal my tarp before I can pin it down with rocks and pads.  I've tried to warm up but the wind robs any heat straight away.  I have a few goes but it feels terrible.  I feel terrible.  The head games change up a gear.

Why am I here?  What am I trying to prove, and to whom?  This piece of rock is clearly way beyond me.  Always has been, always will be.  Frustration. But I'm not sure where it comes from.  Is it not being able to do it? Or is it for kidding myself that I thought I might?  Injustice.  What do I need to do?  Haven't I tried enough?  I feel like I've spent enough days and enough day dreams on this.

I pack up and move off.  There's a huge list of things that I'd like to do in Torridon, some new, most old, but it's always felt like I'm missing the point if I concentrate on them before doing Malc's.  Maybe now it's time to move on. Before I start to head up the hill Ann and Nigel arrive.  They've both been working on their own projects for months and are obviously psyched for another day of battle.  Their motivation brings shame to my self-obsessed pity.

It turned out to be a pretty good day in the end, doing a cool new (?) problem up on the Stokes Croft level, and finding lots of stuff to come back to.  On arrival back at the car there was a note under my windscreen wiper from Ann and Nigel.  As I read it, the motivation started to return... 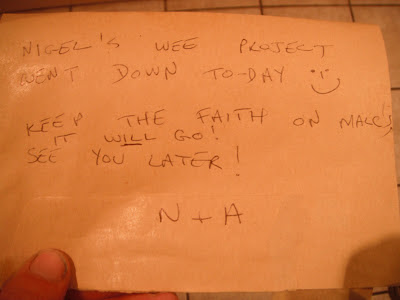