I've just about managed to survive another weather beaten weekend here in the shadow of the Cairngorms.
Last Saturday Neil and I tried in vane to reach the top car park on Cairn Gorm but were repelled by roads closed due to wind damaged buildings. Go architects! Resistance training in 100mph gusts rapidly convinced us that getting into the corries, let alone climbing, was not on. Turns out the climbing wall was much warmer and friendlier anyway, so we went there.
This saturday I met the ever optomistic psyche machine Steve Fortune, a.k.a. Kiwi Steve, at the above mentioned car park (the roads were open, well done team). It was mild, blustery, and worst of all, raining. Given half a chance I would have sacked it and gone back to bed, but Steve being Steve, I dried my eyes, pulled up my hood and walked in to Coire an't Schneachda. As we gained height the rain became sleet and the sleet became snow, and before we knew it we were gearing up beneath a white Alladin's Buttress. On days when you're not sure if you're going to get a route in it's so easy to lose psyche on the walk in; the idea of doing battle starts to gets pushed to the back of your mind. It's a bit of a shock to the system when you eventually start up the first few metres of a route and realise "shit, this is actually happening, I'd better concentrate". 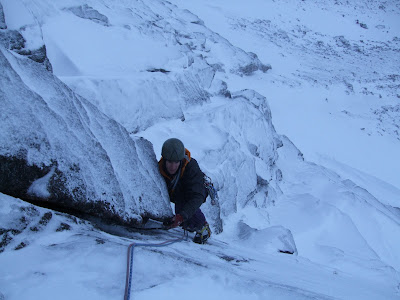 And this is how I found myself, running the first two pitches of The Genie (V,7***) together, as wind-driven snow swirled across the crag and the clouds repeatedly opened and closed, teasing us with views of Loch Morlich and Aviemore beyond. All was going well, I'd managed to keep things together on the first tricky section and had somehow clawed my way up the cracked slab and round the big flake. Just a thin slabby left-facing corner barred my way to the belay above. After a bit of snow-clearance I found good hooks and torques up the crack in the corner, clipped the in-situ runners and teetered up the slab, mono-points balancing on small dishes, moving my tools up one by one. Eventually the crack widened, giving up rattly hooks and tenuous torques and my left crampon started to skitter and skate off the rounded lump I was trying to paste it to. Then, my foot was off, I was off balance and pop, out came the tool and down I went. Balls. Next go I got above my previous high point and was just trying to mantle the slab above the corner, one knee on, one foot trying to smear on not a lot, one tool trying to torque and one tool hooking a flat edge. 'Oh, for some neve' I thaught as once again, pop, I was hurtling down the slab again. Abashed, I decided to belay where I was and let Steve dispatch the crux. Which he did, with expected aplomb. 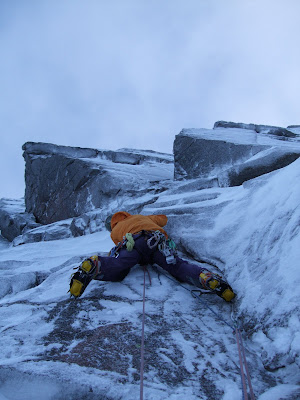 Steve on the thin crux section
Steve then got busy with the top corner pitch, and in no time I was following up and leading through the easy ground to the top of the buttress. Job done, and a bloody good one too. 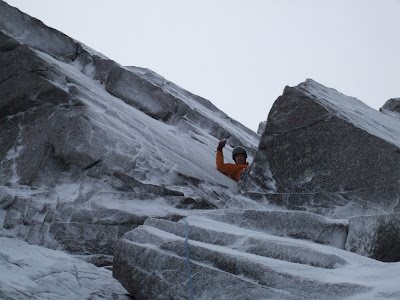 New year, new fun and games. The post Hogmanay hangover depression has been banished and energy levels are high after two weeks of festive exuberance. 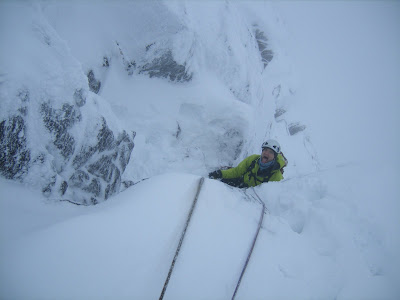 Steve finishing the crux corner of a very burried The Message
So, what has been happening in the world of Soft Rock? I hear you cry. Well, since last bloggage I’ve enjoyed traditional Scottish powder on The Message (IV 6***) in Coire an’t Schneachda with my landlord Steve, several short trips to very cold crags in Englandshire over the festive season, namely The Roaches, Baldstones, and Somerset’s jewel (ahem) Uphill Quarry, a fair bit of running, including a 6 mile circuit with my bro on Christmas Day (the beginnings of a fine tradition perchance?) and eventually saluted my return to the Highlands with a full day on Braeriach yesterday. The gaps between all this were filled with copious bouts of food and liquor consumption, dog petting, familial camaraderie, and oh, did I mention spending time with Jones? 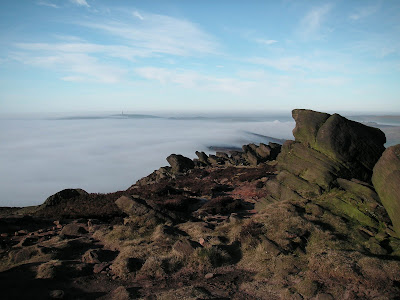 Temperature inversion at the Roaches Skyline (Photo: S. Jones)
That’s right, Jones returned for three weeks from her saintly work in Madagascar (you can follow her adventures HERE) and we spent most of my two weeks off work together. When she was in Madagascar she kept saying how she missed the sensation of feeling cold, and couldn’t wait to come up to Aviemore and experience the Highland winter once again. Well, as we all know, the grass is always greener, and within minutes of stepping off the train she had had her fill of the cold. Sadly, it has remained pretty parky all over the country for quite a while, so the poor lass has been be-scarfed, be-hatted, be-gloved and be-everything elsed for weeks. Not long now until she ships off to top up the tan though. The plan is for me to go out to Madagascar to visit her in March, so I’m starting to make plans. Muchos excitement.

Anyway, you didn’t come here to read about domestic bliss. You want fear and loathing and gibbering miles above the last dodgy ice-screw. And so, back to yesterday on Braeriach. Sam, Konnie and I made the long (12 or so kilometers) trudge into the truly remote and beautiful Garbh Coire Mor via the Lairig Ghru at dark-o’clock yesterday morning under a clear sky and frosty ground, eventually getting to our chosen route, Vulcan (V 4***), a long, long time later. From below we beheld thinly iced grooves and stellar neve so decided to have a pop. Somehow, luckily for me, it was my lead, so I promptly began battling upwards, spurred on by a couple of rather poor tied off ice-screws and small wires teased into the side walls. Anyway, fortunately my lead went pretty smoothly, despite having to gird my loins a time or two. 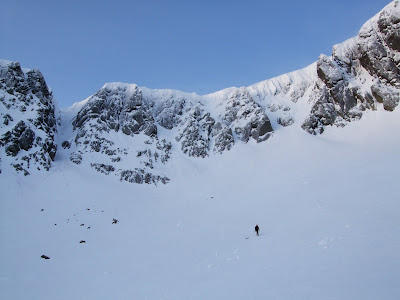 Konnie entering Garbh Coire Mor, Braeriach.
Vulcan takes the central line in the buttress right of the obvious gully
From above my rather uncomfortable, and potentially psychological, belay I could see the sidewalls shy away to leave a steep groove capped by a cornice that appeared Patagonian in style. Oh, what larks. On his arrival at the belay Konnie slumped under the power some utterly heinous sounding hot-aches, coughing, wimpering and groaning into the snow, and all the time being ‘papped’ by Sam and his new video camera. So after several sessions of swearing by Konnie and laughing by Sam and I, Sam started up the final pitch. He made pretty steady work until the final five or so metres of the route, at which point the day took a decidedly dark tone. The sticky ice and neve that we had been enjoying seemed to run out and morph into almost vertical sugar powder. Axe placements no longer existed and the last joke runner was over five metres below Sam’s feet. He started to make noises. And not, happy, happy, joy, joy noises. More OH FUCK THIS IS SERIOUS I MIGHT BE ABOUT TO DIE noises, and at this point I started to look at the one (hopefully) solid anchor of my three anchor belay, and started to think OH FUCK THIS IS SERIOUS I MIGHT BE ABOUT TO DIE. The sickly grin I shared with Konnie told me he was in on the impending peril theme too. Even the weather seemed to join in, and a clear blue sky and glistening coire was replaced by swirling grey cloud as far as we could see. 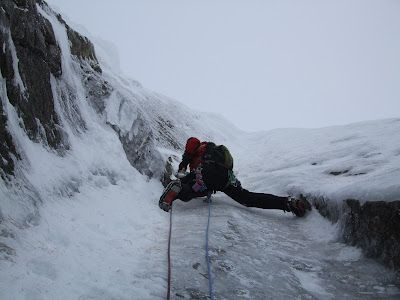 Sam heading towards the cornice on pitch 2 of Vulcan 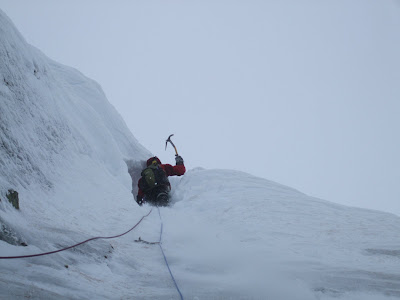 A wee bit later: Sam in Patagonian mode
Eventually Sam started caving, digging into the sugar-snow, burrowing into the cornice and slowly, slowly making upwards and inwards progress. The more he dug, the more the situation seemed to diffuse, until, with the inventive solution of burying sections of his walking poles as runners, he flopped over the top and disappeared from view onto the plateau. Thank fuck for that. Before long Konnie and I followed him into the mirk, shared the ‘we’re still here’ moment, and made the long, long way back down to the car.