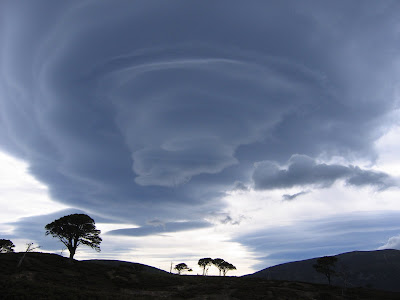 Psycho-killer clouds over Meall a' Bhuachaille. Photo: J. Willi (RSPB)
Where do you go to hide? 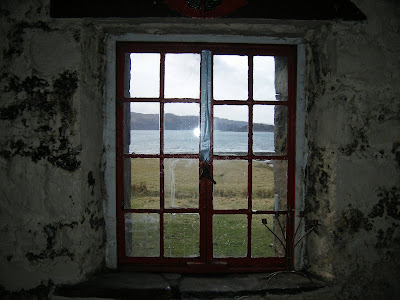 Where is your playground? 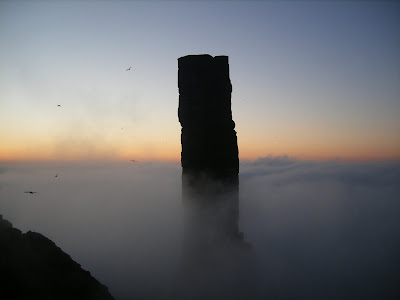 The Old Man of Hoy emerges from mid-winter mist.

Where can you find happiness? 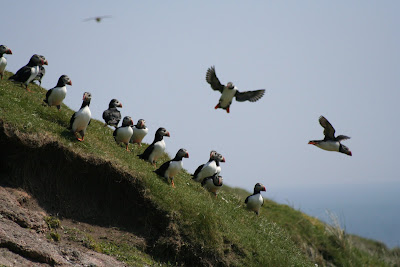 Sometimes the answers seem close enough to touch; sometimes they seem so far away.

Why do so many of us play these useless games? To go back again and again, to struggle, to sweat, to scream?

Is it the places? Is it the people? Is it the spirit-crushing lows and mountain-moving highs? Is it the pain, the fear, the doubt? Is it purely the feeling of doing something, the challenge, testing the ability to overcome? 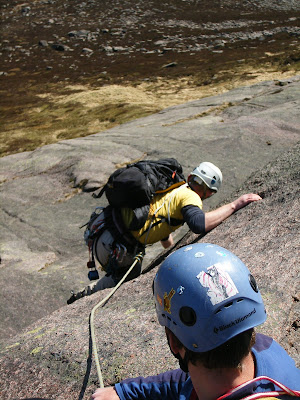 Steev wrestling with the crux on Pushover on Stac an Faraidh, Loch Avon Basin
I don't expect I'll never know. All I can be sure of is that it makes me scared. And excited. And tired. And happy. And alive.
Posted by Gaz Marshall at 15:24 No comments: 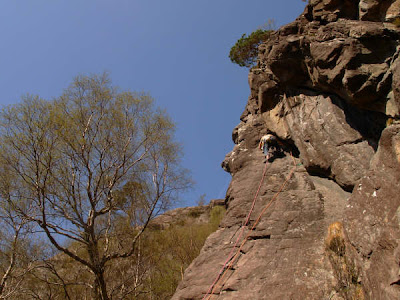 It's been another week of blue skies across the Highlands and the Aviemore posse have been out getting scared, pumped and sun-burnt.
Pete's Wall (E2 5c**) at Huntly's Cave was the start to a good week, climbing with housemate Stevie Hammond and some chap called Julian Lines (whats he ever done on grit/granite/gabbro/limestone?). I then proceeded to almost kill Stevie when a huge hold came off the top of Dead Tree Wall (VS 4c*). Luckily I caught my fall on the profusion of colossal holds in a Mission Impossible stylee. Stevie dived out the way just in time, but hurt his ankle in doing so. Better than stoving in his skull. Be careful out there kids. 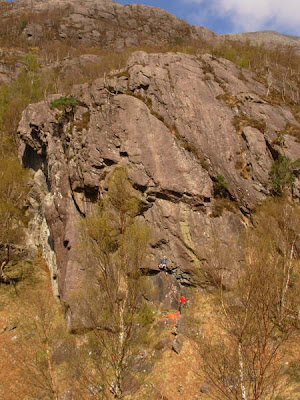 Siobhan Miller on Polldubh's other classic VS, Damnation (VS 4c***)

Jules then showed us a new bouldering spot above Loch Pityoulish which is absolutely incredible. Roof cracks, juggy prows, and scary jamming abound. The next day I teamed up with G2 Mike, Jules and Duncan for more exploratory bouldering, this time in Laggan. Lots of stunning lines to fall off, but just mind the bog. Mike will be bringing out a new Strathspey bouldering guide in the near future, so watch this space for more esoteric masterpieces. 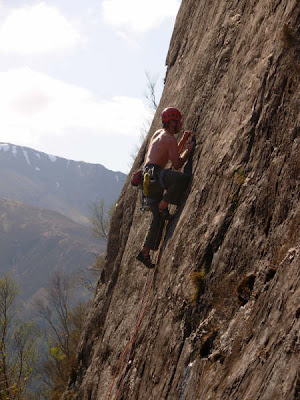 Then it was Saturday and a trip to the holy grail of West Highland cragging: Polldubh. Blue skies, no midges, tops-off-for-power. The highlight for me was heavy-breathing my way up Kaos (E2 5c**) up on Blacks Buttress, but in all honesty sharing a beautiful day in the mighty Glen, on great routes, with friends, is always a sheer delight. 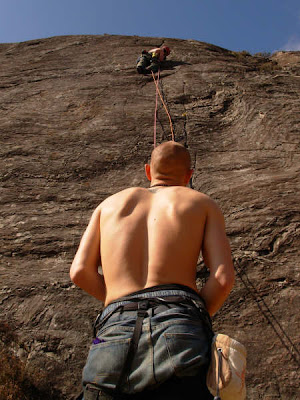 Stevie getting bored while I gibber high on Kaos. 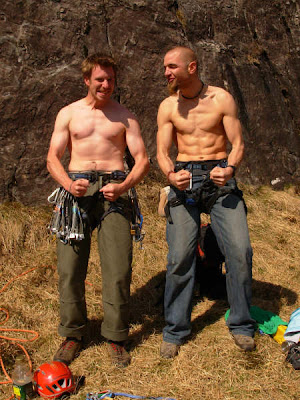 Posted by Gaz Marshall at 14:37 No comments:

This spring as it comes bursts up in bonfires green,
Wild puffing of emerald trees, and flame-filled bushes,
Thorn-blossom lifting in wreaths of smoke between
Where the wood fumes up and the watery, flickering rushes.
I am amazed at this spring, this conflagration
Of green fires lit on the soil of the earth, this blaze
Of growing, and sparks that puff in wild gyration,
Faces of people streaming across my gaze.
And I, what fountain of fire am I among
This leaping combustion of spring? My spirit is tossed
About like a shadow buffeted in the throng
Of flames, a shadow that’s gone astray, and is lost.
The Enkindled Spring, by D.H. Lawrence
Yawning and stretching we blink into the bright light of a new season. As the glens slowly transform from winter’s brown to summer’s green and the icy whiteness recedes to the highest hill-tops, our thoughts start to turn. Eyes begin to look away from the snow, big boots and down jackets are put away, crampons and axes hung up. Winter is over, and with it the cold, the suffering, the early mornings. The spindrift and wetness, the heavy packs and hot-aches. The constant, endless, non-stop weather and conditions checking. Spring is here, and with it the excitement and expectation born of months spent pulling on plastic holds at the indoor wall. The rock-climbing season begins. 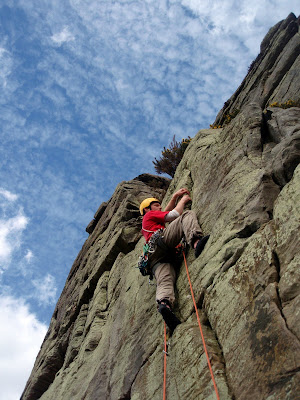 In celebration I traveled south to old haunts. Fife’s Limekilns was the scene of the first routes of 2009, and they didn’t disappoint. Joining my old housemate and long-time climbing partner in crime Steev on Friday evening, we played on the sun-dappled limestone cubes beneath the closing canopy. Steev’s hardest onsight (all be it very soft-touch by his own admission) was a good start on Kiln Dance with Me (E1 5a*). I then flexed my muscles on Elgin's Crack (E2 5c***), one of the classics of the crag, and a pleasing first route of the year since it's as hard as anything I did last year. As the evening drew in Steev waltzed up DTs (VS 4c**) and I gave up before commiting to the bold (but supposedly soft) Grasp the Nettle (E3 5b*). Maybe when there's more light....

Seduced by Saturday's blue sky we hopped into the beast (my Skoda, which is still holding on) and made the pilgrimage to Bowden Doors in Northumberland. I was pretty chuffed to climb Stretcher Wall (E1 5c*), as it's not exactly my forte, and decided to carry my positive momentum forward and have a go at the classic sandbag The Overhanging Crack (E2 5c***). My lack of jamming expertise meant my attempt was short lived, but as Steve put it, I've made the first steps on the journey, so can take it from there. 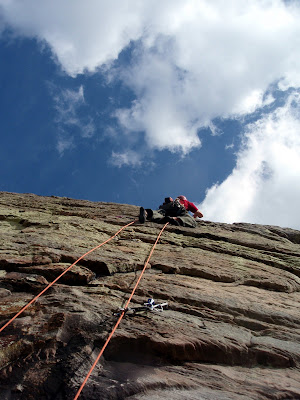 Me on the easier top section of Stretcher Wall, Bowden Doors

Steve climbed the good little Handrail (VS 4c*) and had a good look at Canada Crack (HVS 5a***) before deciding to come back later in the season. Good mountaineering, as Mr 'Crazy' Chris Edwards might have it. In a similar theme to many previous Bowden trips, the 'next step' for me, i.e. the routes in the grades I'm approaching, are mainly soloes, and I'm still not going well enough to commit to them. I had a good look at both Klondyke Wall (E2 5c) and The Trial (E3 5c), but couldn't bring myself to make the long moves high above pads. But hey, it is only April... 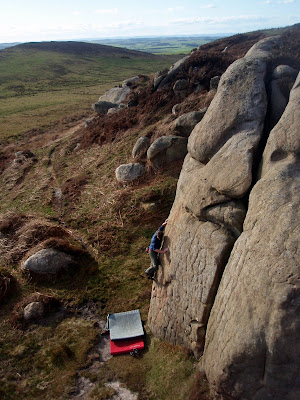 The day wound down with a cheeky bit of bouldering. I managed Cave Left Hand (Font 6a+), which I've tried sporadically for about five years, so was pretty pleased, and then got all highball and fluttery on the superb Childs Play (Font 6b+/E1). So, lets hope the rock season builds from this positive start.

Posted by Gaz Marshall at 11:51 No comments:

48 hours after saying a teary goodbye to Jones in Fort Dauphin, three flights, four Imodium, 6000 miles; I'm almost home, but not yet. I'm stopping at my folks down in Somerset for a few hours before I catch one final flight back to Scotland tonight.

Only a couple of hours off the plane and I was keen to see if my diarrhea-enforced fighting weight would pay dividends, so I hot-footed it to Cheddar for an hour of sleep-starved bouldering. Except for remembering that soloing polished limestone next to a busy road is truly terrifying, I learnt nothing.

Anyhoo, as promised, some photos from the land of Miss Sarah Jones: Ladies and Gentlemen I present Madagascar. 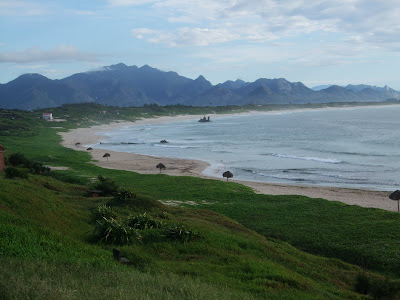 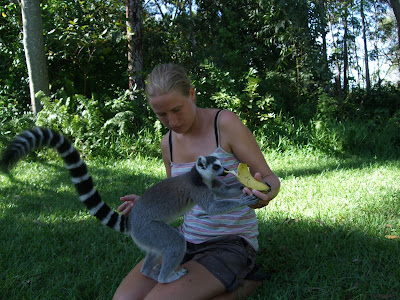 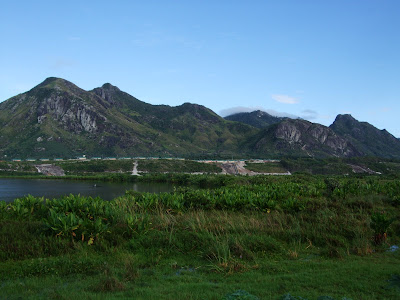 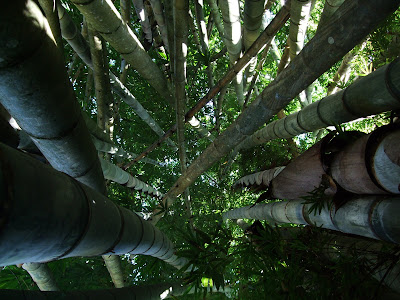 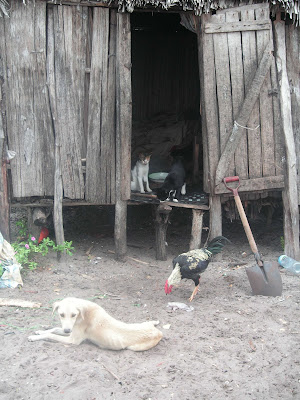 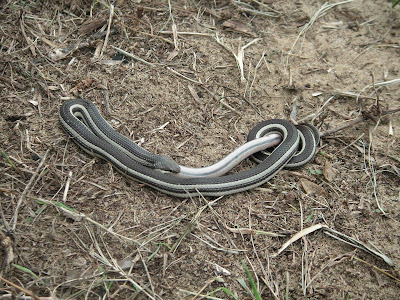 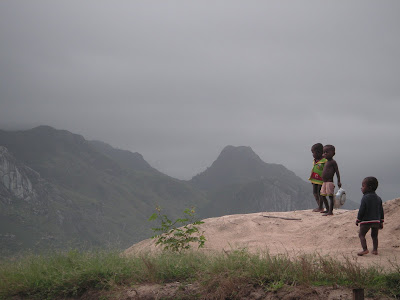 Posted by Gaz Marshall at 13:17 No comments: