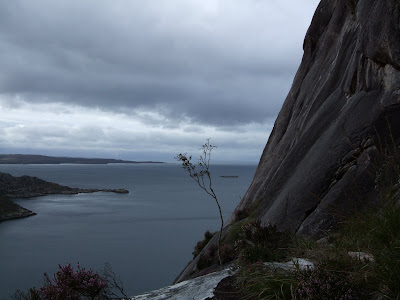 Mid-September gloom on the West coast
Four pitches up and the inevitable happens. We’ve been watching the surrounding glens and hills smudge in and out of view through the greying rain all day but somehow our own little mountain paradise has remained under a spotlight of sun; romping up the rough schist of Creag Ghlas’ Salamander, holding out for a sliver of luck to keep the soaking away until after the climb.

Only two pitches left, we huddle into the belay, shivering and shuffling like ledge-bound guillemots in an Atlantic storm: the onslaught arrives. Water drips off my helmet and down my nose as another squall races down the glen at us, a slavering pack of hunting dogs come to ruin our fun. “As soon the rain stops this wind’ll dry the rock” I tell Steve, feigning confidence. “Aye, we’ll sit it out a while and see what happens” he replies.

Two minutes later, considerably colder and wetter and with no likely respite, we’ve made up our minds and start our descent. Belay devices wring a steady trickle of water from the ropes as we begin the abseils; stiff frozen fingers fumble with prussik loops and screw-gates. Touching down on rope stretch we pack our sodden gear and slide down the hill, to the bikes, to the car, home and to the warm fire. All the while the waves of showers keep breaking.

Tails between our legs, we spend the evening drying gear around the wood-burner and arguing the toss over tomorrow’s plans. The smart money points eastwards to a day in the Cairngorms, but emboldened by blind optimism we decide to drive into the storm again and see if we can punch through to a sunny West coast. Time will tell.
Leaving a near cloudless dawn in Aviemore, we drive north and west into the gathering dark. Passing through Achnasheen the windscreen wipers twitch and by Kinlochewe are in full flow; it looks like our gamble has failed. Beinn Eighe and Liathach have lost their heads to the swirling clouds and conversation falters to a dejected silence. Then, rounding a spur, out over the sea to Diabaig and Skye beyond we spy a blur of blue and gold on the horizon. Sun! Keep driving!
And we drive on. 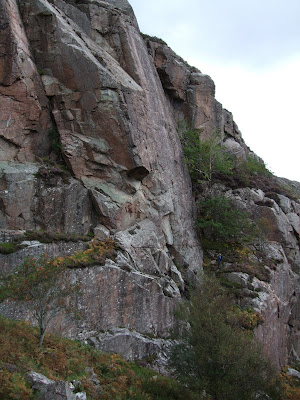 A little blue speck beneath The Pillar at Diabaig. I'd wanted to climb this route for years and had said that if I could do this, The Bug and The Needle this summer, anything else would be a bonus. Onsighting E3 and headpointing E5 and E7 feel like pretty big bonuses. 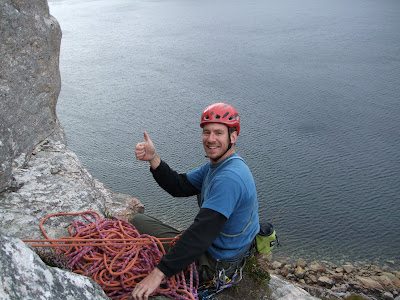 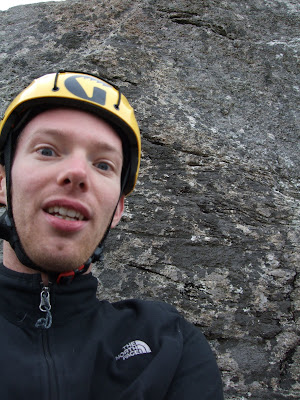 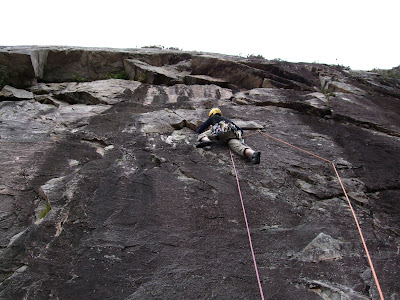 Posted by Gaz Marshall at 09:07 No comments: 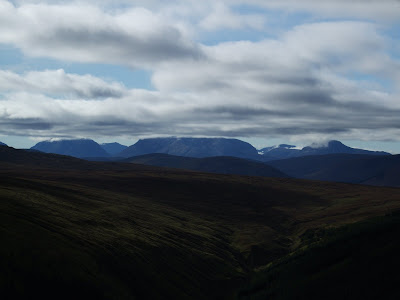 Liathach and Ben Eighe from Sgurr a' Mhuilin, Strathconnon
In the same way that Aristotle said that "one swallow does not a Spring make", I'm sure that one high pressure system does not an Indian Summer make. Indian or not, however, this weekend's weather was good enough for me to throw off the oppressive shackles of race training and to go climbing in the sunshine. Yippee. Little did I know it but I was in for two very contrasting days.
Saturday dawned sunny and still as Alex and I hit the road north to Gairloch in search of a day's sport climbing on shiny bolts. Our destination was Grass Crag - a short wall of perfect vertical gneiss, sporting routes from F5 to F7a in a beautiful, friendly spot. In total we ticked 11 routes, included a 6c onsight (my P.B.) and a 7a redpoint, laughed, drank beer and revelled in the jeopardy-free experience that bolted rock affords. By the end of the day were so tired we both fell off a 6a+ before retiring to the wonderful Bridge Cottage Cafe in Poolewe. 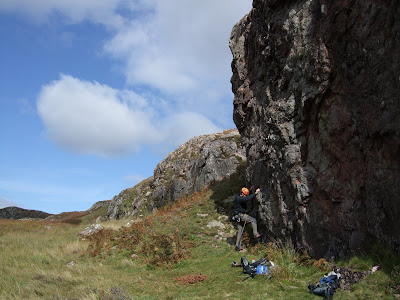 Alex ready for another route at Grass Crag 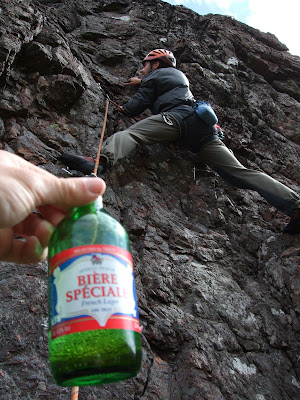 When I woke up on Sunday and peeked through the curtains it was obvious that a different kind of day was in store. Low cloud shrouded the hills of Strathspey and a fine drizzle fell, saturating everything. I'd agreed to join Kev Shields to act as moral support/belay bunny on his quest to headpoint his first E7. Kev's inspiring story of climbing with only one hand has been written about by many so I won't dwell on the story, but suffice it to say that having moved to Fort William in the summer and climbing his first E5 and E6 in consecutive weeks, his lifeime goal of E7 isn't far away. He'd hoped to get on Firestone at Hell's Lum, but the weather had other ideas, so instead we headed up to Creag Ghlas in Strathconnon fo a look at another of Julian Lines' psycho-slabs, The Unknown Soldier. Paul Diffly from Hotaches Productions was with us too, filming Kev for an upcoming DVD. 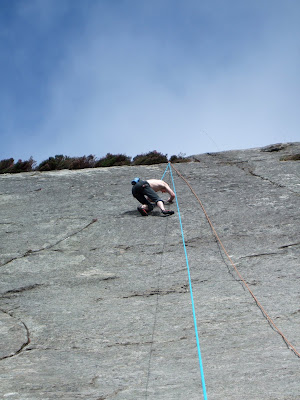 Kev working The Unknown Soldier
It turned out that a combination of friction-sapping sunshine, a two-hand specific move on the crux and the trifling matter of a potential groundfall from 15 metres eventually put paid to Kev's attempts and we all walked back to the car in one peice. But, for a short time it was evident that Kev was building up to the lead, entering the dark headspace that dangerous climbing demands, and each slip or mistake on the top-rope seemed to be magnified into the bone snapping reality that it could spell. In the end, Kev realised that now wasn't the time to push the boat out, and sensibly came down unscathed. 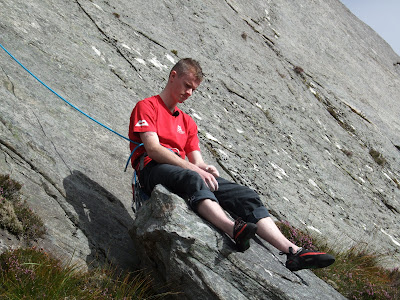 I've got very little experience of this type of climbing, but I've done enough to know the feeling of inevitability, both horrible and thrilling, that Kev was going through. As soon as you get on the route and start to make progress you suddenly feel like you've entered into a pact, and you know that at some point, no-matter how distant, you have to climb it. The fact that it's a pact with yourself doesn't seem to matter, in fact, it seems to make it even more unbreakable, and the Damoclean sword just hangs over you until you end it, one way or another....

Posted by Gaz Marshall at 13:29 No comments: 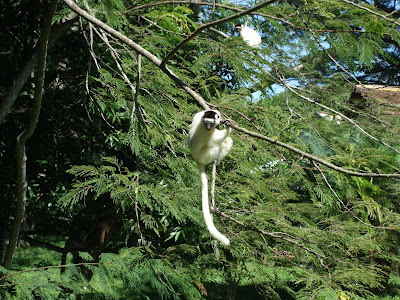 Is this Sifaka worth protecting?
A conversation I had yesterday got me thinking about the nature of my work. Someone told me they thought that capercaillie (very rare birds that I’m involved in trying to conserve) were a mixed blessing. It took me a while to work out what they meant. Surely, the presence of one of Britain’s rarest and most charismatic birds anywhere is a good thing. We should be protecting them, shouldn’t we? Like me, the people I was talking to are outdoorsy types – runners and climbers - but to them the presence of capercaillie means restricted access to land, paranoid land-owners and, potentially, millions of pounds thrown away just trying to save a bird. It got me thinking about motives, and ultimately, about my personal view of the importance of nature conservation, and it struck me how it’s really a very personal issue.

As a professional tree-hugger I try to question the work I’m involved in and the motives behind it. I’ve thought long and hard about the hows, whys and wherefores and am still unsure of lots of the answers. Here are a few thoughts to mull over:

Why should humans bother protecting other species or habitats at all?

To what extent should humans intervene with nature in order to bring about our own goals, and by what ‘right’ do we intervene?

Is it acceptable to protect a species or habitat at the cost of human development?

Are some species more worthy of protection than others?

In trying to answer these seemingly basic questions you very rapidly go from biology and ecology to much bigger issues of morality and philosophy, and people from different cultural backgrounds or points of view will give wildly differing answers. So, how do we decide who’s right, and how do we decide how to go about saving this planet that we’re single-handedly ruining? 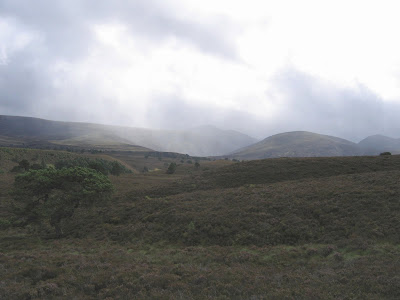 Posted by Gaz Marshall at 08:39 No comments: 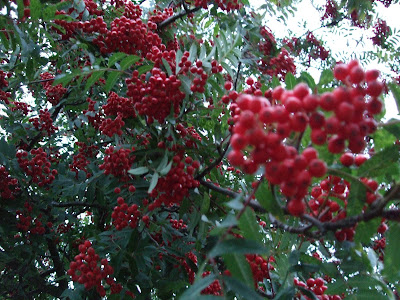 A Rowan Riot:
According to folklore, loads of berries in the autumn herald a harsh winter to come. Here's hoping.
It seems that August has come and gone just as fast as July did. The shortening of the days, the gaggles of uniformed kids waiting for the school bus, the stark red rowan berries, the first sign of condensing breath in the morning air; they all mean one thing: Autumn approaches. A time for showers and gales and piles of dead leaves; for coming in out of the wet and the cold and lighting the fire and drinking giant mugs of tea in your biggest, warmest wooly jumper; for feeling content with a summer well spent and the rising tide of excitement and expectation as winter’s first snows creep ever nearer.

For me, autumn means that the running season begins, as I try to ready myself for the Original Mountain Marathon in late October. Having done reasonably well in the A-class event in previous years, my regular running partner Duncan and I have decided to try the Elite class this year, which could prove a mistake. It seems to me that Elite running really is the preserve of proper hill-runners and orienteers, while I consider myself a lucky amateur who does a bit of running when climbing’s off the menu. Maybe if I take my training seriously this year we’ll at least finish the race.
On that note, where’s my lycra? 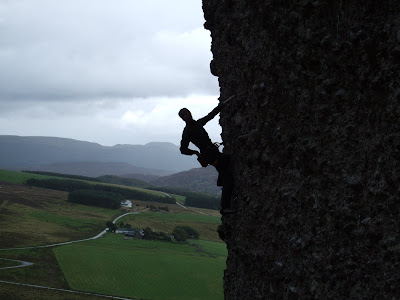 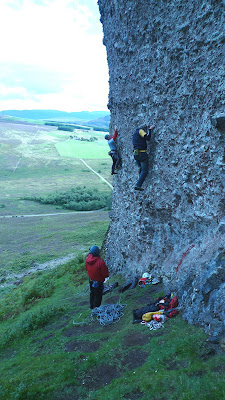 Guy Stephen (l) starting Inverarnie Schwarzeneggar and me on the amazing Stone of Destiny (F6c+).
(Photo: Blair Fyffe)
Posted by Gaz Marshall at 08:39 No comments: