Get it while it's hot!

I buckled under the pressure and spent some time trying my little DWS project on a shunt.  All ethical scruples go out the window when there are only a handful of days each year that I'm willing to fall into a river.  Majorca this aint.

Pleasingly, there are some pretty meager grips up there and the easiest sequence I found was still pretty hard. I still couldn't link it on the rope, so although I knew what to do a nervous air of mystery remained.

Last night my motivation was pretty low.  After a day at work the grey skies and breeze didn't make the thought of another watery plummet particularly inviting.  I checked the forecast in the hope that tomorrow would be nicer but it wasn't looking much better. Shit. Maybe that was the window. If I don't go now maybe I'll have to wait another year. Shit.

Knowing what I was in for, I knew I would have to be well warmed up to have half a chance; one of the many reasons I love having a board at home. I slowly started the process, going through my list of warm up problems: Juggy Circuit, Undercut, Left-hand Yellows, Left-hand Yellow Mirror, Moon Pinch. Eventually, as the mists of the work day started to part, I started to feel the psyche arrive. That bubble in the gut. That burning. I dived in the car and turned on the tunes.


Get it while it's hot! from Gareth Marshall on Vimeo.
Posted by Gaz Marshall at 10:59 No comments:

It amazes me how short the collective memory is.  For a nation that's supposed to be obsessed with the weather our obsessions don't seem very grounded in reality.  So many people I talk to seem to have a rose-tinted view that the summer months of July and August should bring picture-postcard long hot sunny days, mountain crags, nights under the stars, sea cliffs, bronzed bodies frolicking on beaches - the dream sold to them by social media and marketing - and feel cheated that in the Highlands it's generally two months of humid, midgy, bracken-choked rain. 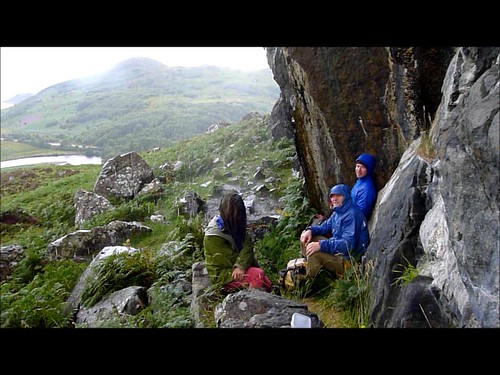 
For me, I've lived here long enough to realise that it's better to write these months off for big objectives, to keep ticking over in anticipation for the cooler months ahead and then to consider any climbing that happens as a bonus. The summer seems to have consisted of pottering about at local crags and boulders. Fortunately the hard work of a handful of folk means there are a few great routes round here that are well worth doing over and over again. I'm not sure I'll ever get tired of doing Little Teaser at Moy, scraping through those last metres to the belay using different holds every time. Then at the Camel Stone of Destiny never feels like a certainty and is pretty stiff for a warm up, and then The One and Only at Brin is just superb, straight up the middle of the wall.

There's also a ready-supply of routes at these crags that I'd still not done. Ian's Little Squeezer (6c) at Moy is aptly named but well worth it, filling an obvious gap on the Big Flat Wall. Neil Shephard's Over the Hills and Far Away (7a+) at the Camel put up more of a fight and wasn't helped by the midges and passing rain. Up at Brin I finally got round to redpointing Andrew Wilby's classic The Pink Wall (7b) over two sessions. Despite only being 8 clips and 15 metres long this packs in quite a bit of climbing, and for a scaredy-cat like me it feels pretty airy up there. Another one bites the dust.

Having written all that about the crap weather, this last week has actually shown signs of summer and the local pottering has continued in force.  I've been back to the River Conon where there's a cool steep wall above a deep pool to try to do a fierce micro-route that Andy Moles told me about last year.  I'd previously abbed it to check for holds, but have been trying to climb it ground-up and have now taken the splash-down from the same place 7 times.  Dry chalk bags and shoes (and midge tolerance) are becoming a limiting factor - not to mention warm sunny days that make the thought of falling in a river attractive - so I think I'm going to have to try it on a rope.  Watch this space. 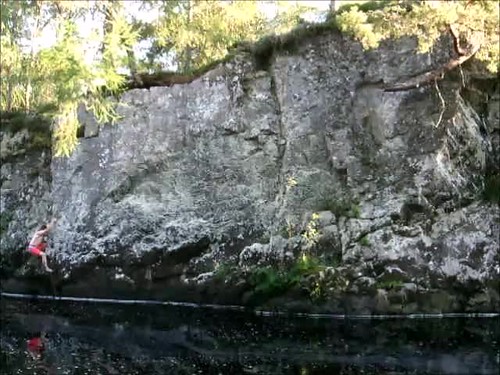 Posted by Gaz Marshall at 11:16 No comments: