Deep and Crisp and Even

I’m sure that this must have been written on internet forums, said in the pub and shouted throughout corries all over Scotland, but this has to be the best start to a winter season for a goodly while. I’ve only been climbing for five years, but this has been my most productive pre-xmas period so far, and I work 9-5, and I’ve still got at least one weekend to play with. In the run-up to previous Christmas’ the best I’ve managed is a single route, but this year I’ve already done 4.33. Let’s hope it remains this good. 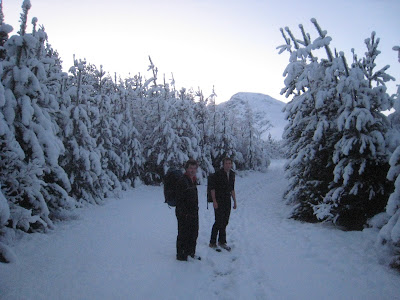 Konnie and I in Narnia (Photo: S. Loveday)

Last Saturday was a real peach. The sun rose over a white West Highlands, with the dismal lodge-pole pine plantations of Leanachan Forest beneath Ben Nevis transformed into a wintry wonderland. I joined Edinburgh raiders Sam Loveday, Konnie, Kiwi Steve and Sam Hawkins in the Torlundy car park and we crunched and slithered our way through the deep fresh powder to beneath a very white Carn Dearg buttress under a cloudless sky. Sadly the freeze had arrived just after the snow, so soggy turf was insulated under the powder and the initial plan, Route 1 (VI, 6), was off the cards for Sam L, Konnie and me. So, after girding our loins for some serious wading we headed up to South Trident Buttress in Coire na Ciste and geared up beneath The Slab Climb (VI, 7). I have to admit, I’m still lacking experience in the world of mixed climbing at grade V and above, so I was glad that Sam and Konnie were around as shoulders to cry on if I needed them, despite Sam’s previous comment that “Konnie is about as handy as Abu Hamza”.

So, I lead the initial entry pitch to beneath the delectable 40m slab pitch, set up the best belay I could muster (a bulldog, a cam in an icy slot and a hammered axe, hmmm), and brought up the boys. Of course, after all the faff below Route 1, the wade up Coire na Ciste, and taking a while to make such a bombproof belay it was well after midday by the time Sam was starting the crux pitch. After a bit of very justified gibbering he eventually got some good runners into the verglassed cracks and started to make steady progress, all the time telling Konnie and I that he wasn’t going to do it and would come down in a minute. 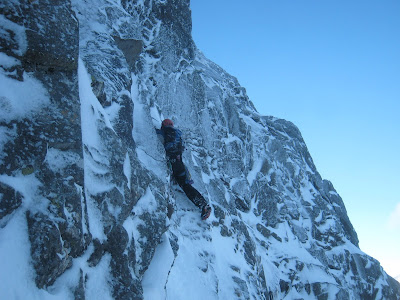 Me on pitch 1 of The Slab Climb. I can assure you, this makes it look harder than it was, despite my best efforts otherwise. (Photo: S. Loveday)

A few hours later Sam was at the belay after a sterling lead and the sky was beginning to darken. Another pitch remained above this one, and there was no question that we would be climbing in the dark for some time, especially given the faff of climbing as a three. I’m not a huge fan of seconding, and the idea of seconding two pitches in the dark really didn’t appeal, so I decided to cut my losses and run away while I still could. There was enough rope left to abseil back onto the snow-slopes below the route, so I made my excuses and left Konnie and Sam to it. 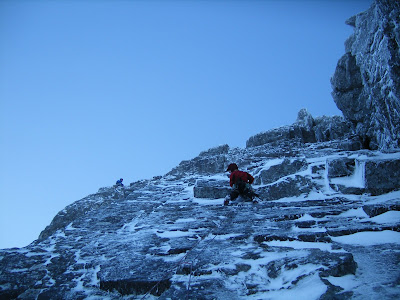 Sam looking lean and mean on the main pitch of The Slab Climb. You can see Ian Parnell on the skyline on the first winter ascent of Devastation, a summer E1.

As I wandered back down the Ben to the car I was in quite a quandary. What was it that had made me want to run-away when the others had been happy to stick it out and get committed? Why had I turned-tail and bailed? It’s a funny one. Sometimes I’m up for the fight and the fun, and, after all, I was going to be seconding so nothing was going to happen to me. But at other times I’m not fussed. I guess I had had my lead (all 10 metres) and wasn’t really bothered by seconding in the darkness if I didn’t really need to. If we were five pitches up with two to go it would have been a different story, I guess. These thoughts chased themselves round and round in my head all the way to the car and all the way home. Still, I wasn’t that fussed; any blue sky day on Ben Nevis is a pleasure, summit or no, and the route looks brilliant, so I’ve got good reason to go back and seal the deal.

So, a week of shivering, cautious driving on icy roads, and weather watching passed and along came this weekend. Steve came up from Edinburgh on Friday night and we made plans for a trek into the Loch Avon basin in the Cairngorms to see what we could climb on Carn Etchecan or Shelterstone Crag on Saturday. 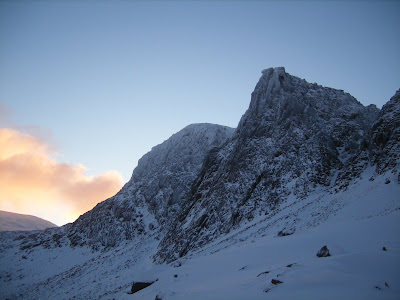 Leaving the car at 6.00 meant there was still an hour and a half before the sun made its presence felt, and recent heavy snow dumps meant any signs of the path were buried. We ended up making a graceful arc into Coire an’t Schneachda, when a straight line would have done fine, but since we were breaking trail we were able to enjoy watching those following our footsteps going the wrong way too. The sun came up on another cloudless Saturday morning, creating that eerie light peculiar to mountains in winter when it seems that the hill itself is glowing. Sweating and puffing up the Goat Track, it was a delight to stop to draw breath and gaze at the thickly rimed crags under the fiery skies. After three hours of heavy going we made it to below the rearing tower of Shelterstone Crag, and decided that we had come far enough. Our initial plan of climbing a route on Carn Etchecan dissolved at the thought of even more trail breaking. It was Steve’s first route of the year, so perhaps not the best time to hop on something hard and long, so instead we hopped on something steady and long. Western Grooves (IV 5) provided the days sport, so after a quick game of Scissors, Paper, Stone, Steve led off up the initial snowy gully. Luckily, the roll of the dice meant that I got the two best pitches, both with nice moves into and out of deep chimneys on great hooks and bomber turf. The route meets with Clach Dhian Chimney towards the top of the crag, wondering up and right, and eventually we broke through a notch in the headwall after an atmospheric traverse in the dark. 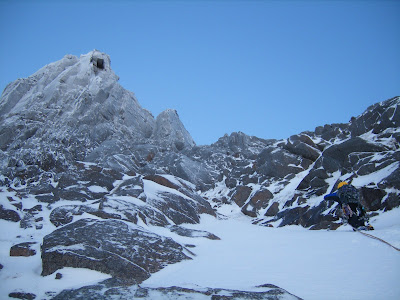 Steve starting up pitch 1 of Western Grooves, which eventually climbs the chimney formed by the obvious v-notch on the skyline

Luckily, we were able to follow another team’s footsteps back across the plateau and down to the car, which saved much energy and time. Never the less, we were both pretty well done, and our initial plans to head out again on Sunday evaporated. 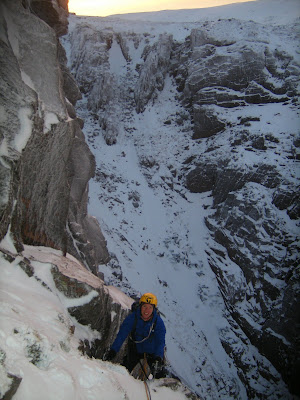 Steve finishing pitch 4 as it starts to get mirky

Western Grooves was my first route on Shelterstone, and despite being neither the hardest or best bit of climbing I’ve done, it was one of the best winter days I’ve had. The combination of a long day, a long route, perfect weather and the incredible beauty of the crags of the Loch Avon basin meant that whatever the climbing was like, it was merely a bonus.

Roll on next weekend….