The Autumn seems to be passing in a blur.  It's only a matter of time before the northerly wind brings the snow to the hills, but it seems like only yesterday I was lapping up the summer sunshine.

I guess I have been pretty busy; Sarah starting a Masters in Edinburgh, my new job, organising and attending Steve's Stag, then his wedding to Fran, the OMM and all the training that requires, then trying to climb on any free time left over.  No wonder it's gone so fast. 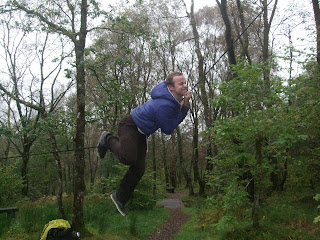 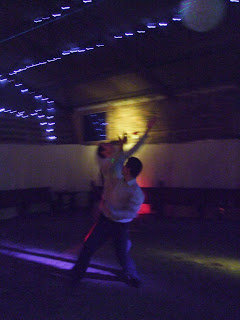 Athletes at work: Duncan and Konrad's interpretative dance workshop at 0300 at the wedding.

The OMM is my annual concession to being a runner - an autumn crusade to get fit and fast.  As in the last 8 years, from late August to the end of October I increase my weekly running mileage and head out for some long runs in the hills.  Fortunately my last few jobs have kept me in reasonable hill fitness, so I've got a good base to build on.  The highlights of this year's training runs included a round of the Drumochter munros, a link-up of 5 of the Alder/Ardverikie munros and the Pentland Skyline (I couldn't do the race so ran the course on the Friday before).  Duncan, who I've been running the OMM with for the last 6 years, is now a proper runner, he's in a club, competes regularly, and has even been crowned the South of England Senior Fell Running Champion, so I was acutely aware of my relative lack of running.

The race was this weekend just gone, based near Comrie in Perthshire and based round the munro Ben Chonzie and it's surrounding classic OMM wasteland of bogs, steep glens, deep heather, peat hags, hills, mires, fens, swamps and flushes.  Running in Elite again, we were chuffed to see the straight line course was only 38km on Saturday and 29km on Sunday (relative to last year's 51km and 36km), however hilly terrain and rough ground meant we were out for almost as long.  Saturday's weather was also suitably OMMish - low cloud, heavy rain and a strong wind. Lovely.

In the end we were really pleased to finish in 6th, our highest ever place and behind a load of beasts (i.e. proper runners that win big races and are known names in the circuit).  It never fails to amaze me how we do it, but somehow we do.  Well done Duncan! 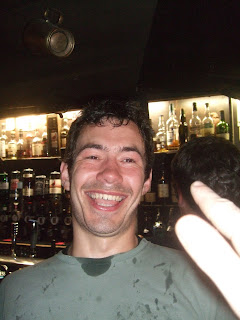 For Athlete's like Duncan Steen, re-hydration is key.  Tequila is optional.

As for climbing, well that's been on the back burner for the last few months, but I have spent a fair bit of time hanging from my rock rings at home, as well as a few visits to the Betts training dungeon.  I did add a new problem to Laggan 1, and had some fun trips to Moy, ticking some of the raft of new routes.  A quick redpoint of the new F7a One Man Went to Moy reminded me that things aren't too bad, and a day lobbing off Primo (F7b+) at Am Fasgadh reaped some rewards with new sections linked and crucial beta found.  I'm off out to Catalunya with a bunch of wads from Scotland and Wales in a few weeks, so quite keen to get fit.