Well, Steve and I tried, but who are we to argue if mighty Mother Earth decides to put a stop to our plans? That's right, a week of sun-drenched sport climbing in El Chorro was called off due to the minor tectonic incident over in Iceland. Ho hum. The idea of the trip had been to get plenty of mileage early in the season for trad climbing fitness, but since this wasn't an option we decided to just be unfit and go trad climbing anyway.

So, with 5 days and a good forecast, where should be go? Of course, North Wales. So, we packed all manner of ropes, racks, shoes, pads and spare pants into the car and headed south.
Day 1: The Pass 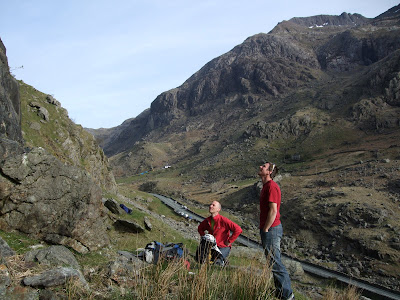 All proper North Wales climbing trips begin in Pete's Eats cafe in Llanberris, so after arriving at 2am and a few hours broken sleep in the car we breakfasted on grease and pint-mugs of tea while perusing our shiny new guidebooks. Then it was up Llanberris Pass to Dinas Mot and a combination of The Cracks and Lorraine (mainly Lorraine, but I got a bit lost on the first pitch). We both blamed sleep deprivation and polished rock for our low confidence start, but deep down I feared that maybe I've been getting too used to soft Scottish grades. Back at the car we hunted the guide for somewhere friendly and ego-massaging for the afternoon but didn't seem to find anywhere suitable so went to Craig Ddu instead. In much the same way as it's Scottish cousin (Creagh Dubh) this crag looks pretty gnarly, and no-doubt is in places, but provided us with a couple of really good, unlikely looking routes in Yellow Groove and Sea Panther. Confidence started to creep back...

Almost 5 years ago I came for my first (and last?) trip to North Wales and came to Gogarth. The whole place was utterly terrifying - huge loose looking cliffs dissapearing into a stormy sea, abseils, commitment, hard climbing. Scary. I attempted to second Ali Banwell up The Strand on The Upper Teir and got well and truly schooled. I didn't have anything like the levels of fitness, technique and confidence needed to climb it, let alone lead it, and I've always held it in my head as a personal benchmark. If I can lead The Strand at least I'm not doing too badly.

Well, 5 years on I slayed the demons and climbed it. For the full tick Steve lead the second 'pitch' through the hanging gardens of Gogarth. Hooray.

I'll gloss over what happened next, but suffice to say that we abseiled in to Wen Zawn to climb A Dream of White Horses but I ruined it by climbing miles past the belay on pitch 1, leading to an easy escape back up the slab. Next time... 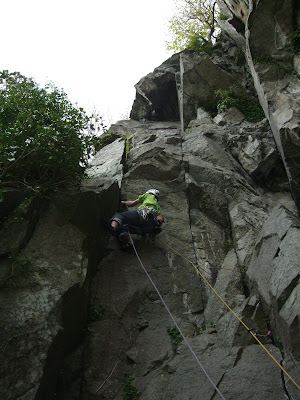 Steve styling P1 of The Fang

One of the many reasons that there are so many good trad climbers in North Wales is that the abundance of crags they have lends them to getting committed. In Scotland we have lots of big, committing routes, but they are almost all remote and hard to get to, so I'm not particularly well practiced at being brave and commiting to things a few pitches off the deck. In Wales there are roadside multipitch crags all over the place, so you can be sitting at your desk at work one hour and then fully committed, jibbering above a dodgy belay 3 pitches off the deck the next. Tremadog is one of these crags.

Fortunately all our belays were sound and there was minimal jibbering, but we did climb three super classic routes in the form of Scratch, Scratch Arete and The Fang. 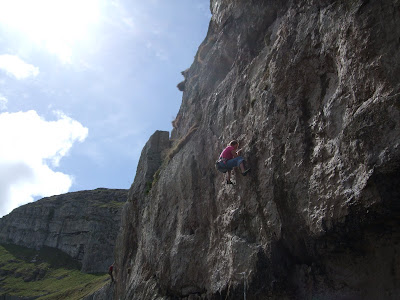 Rain inland meant coffee in V12 followed by a raid to the coast to sunny sport climbing at Lower Pen Trwyn on The Great Orme. There's a fair few routes to go at here, and there were a fair few folk trying them too. Not a million miles from onsighting a 7a with an odd name about pinkies and ticked the classic 6b(and a bit) Kaffe Fasset. If it's sport routes you're after though I would have to say give me a quiet day at Goat Crag or Am Fasgadh anytime... 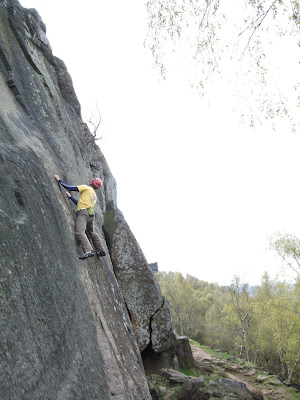 Punctuating the long drive back to Aviemore was a good idea, so we headed to Chris' in Matlock on Sunday night and spent Monday morning scorching up the classics. Joes Direct Start, Great Slab, Sunset Slab, Strpiombante, Tody's Wall and Three Pebble Slab all got the treatment. Tetttering up Great Slab reminded me how much I love this type of climbing and brings my thoughts racing back home to blank Cairngorm granite. When will the snow melt?

So, not El Chorro, but still a stonking wee trip. 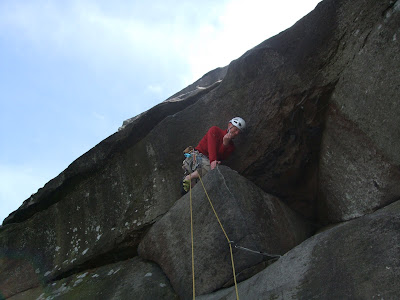 Steve cought red handed on that bit of Tody's Wall at Froggatt.

They say the first step is admitting it, so here goes. I'm an addict. There, I said it. An addict. My body has become physically dependent. I need. I crave. I demand. And I get my fix. A heady cocktail of chemicals flows through my veins on a regular basis. A.L.E.

Spring in the Highlands. The sun shines, the birds sing, the snow melts, and the rock-jocks get their fix. After a winter of sport climbing and bouldering, the trad season has finally arrived, and with it a whole heap of excitement and expectation. What to do? Where to go? Ambitions? Projects? We'll see. While it's still 'early season' (a classic climbers excuse for not trying hard), I want to get lots of mileage so I can start to flex my muscles and hone my head for bigger, scarier things in the summer (big sea cliffs on Pabbay and Mingulay in June, and hopefully some big granite slabs in the hills when the snow starts to melt).

With all this in mind I'm pleased with the way things have gone so far. Dave's Dilemma at Logie Head seems to have a reputation as a hard E1, so it was a good first extreme of the year, but it was truly trumped by Still Waters at Ardmair (E1 5c and then some). Then Tat's brilliant Someone Else's Dream at Loch Tollaidh was the seasons first E2, and hopefully the first of many. If you're looking for a soft E1 do Kermit Direct on Fraggle Rock at Loch Tollaidh, it's a gift. After-work cragging started this week with my first visit to Tynrich Slabs, near the Ruthven Boulder. It's a bit of a backwater and fairly limited, but the Hard Severe Scorpion and E2 Blewitt were more than worth the drive. And then last night it was the first Huntly's Cave raid of the season and I managed Lime-Ade, the E2 that starts up Lime Street before escaping up the arete, though I think 'escaping' might be a bit strong. 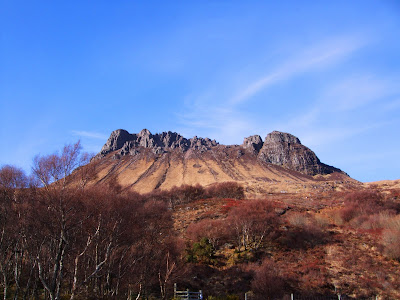 Welcome to the news. These are the headlines in the world of Softrock.

Striking While the Iron is Hot: Early season trad kicks off in the Highlands. Creag Dubh, Logie Head and Ardmair succumb, a bit. 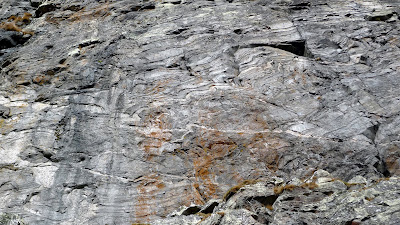 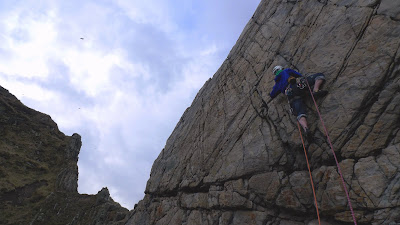 Steve on Cullenary Delight at Logie. (Photo: Steve Crawford)
Bird Bothering Continues: A new contract for yours truly sees me up at dawn once again in search of sex-hungry grouse.

Road To Domestos: Our intrepid correspondent gets a thorough going-over by this bizarrely named boulder problem at Scatwell. 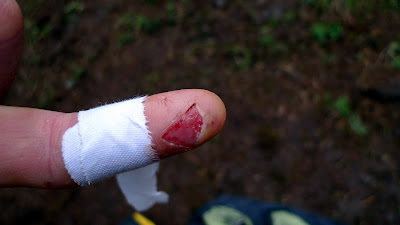 Richie's small flapper. He's so strong he snaps rocks with his fingers, but they get their own back.
(Photo: Steve Crawford)

The Home Front: A new house in Aviemore for myself and Jones. How will she cope with my smelly climbing shoes? 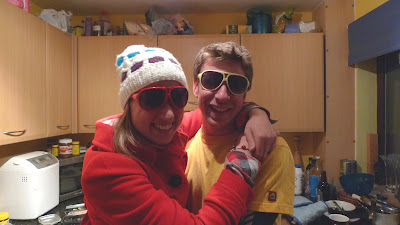 Stac Pollaidh Conquered: A quick run up the castellated Coigach peak is the perfect tonic for bloodied post-Ardmair-climb limbs. 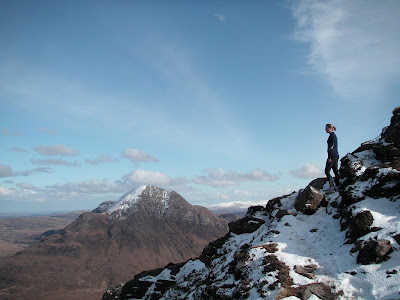 Posted by Gaz Marshall at 13:38 No comments: