Over the last few weeks I’ve been over the back of Cairngorm a few times to inspect the snow-melt progress on the Lower Slab. There’s still too much snow to get to work on the route, and it’s looking like Firestone is going to be the last snow-free line on the slab, but inspired by Dave Mac on Echo Wall this time last year I had a session with a shovel after work on Thursday and managed to make a tiny impression. In the four trips I’ve had over there so far I’ve noticed that the snow is disappearing fast, with a noticeable difference between Thursday’s digging session and Sunday’s view from The Needle on the Shelterstone, so it shouldn’t be too long before I can get on it. Fingers crossed for melting weather.

As for the housekeeping of working a route in a remote spot like this, I’m hoping to stash the kit I need nearby so I don’t have to carry everything back and forth every time I’m out. I’ll just set up a top-rope and work the moves on a shunt until I’m happy. I’ve sussed the gear required for the top-rope anchor, and will leave it in-situ for the summer (unless some cheeky bastard nicks it.) As for the climbing, I abbed down the line and think that if I can do the first half, I should be able to do the second, and I’m happy to confirm that the guidebook description is correct; holdless and protectionless. The more the snow recedes to reveal the bottom half, the more I wander how the hell Jules got up it, but I’m getting stoked about working at it and piecing together the puzzle. 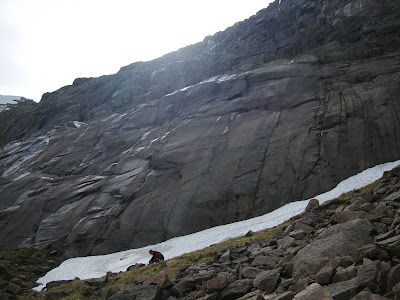 The Lower Slab last June after I had just climbed Pluto, another of Jules' devious slabby delights. Firestone is out of shot on the right.
Finally, it’s a good time of year to go hunting for crag-swag. As the snow disappears the shiny things that people threw off the crags over the winter are ripe for discovery, and so far in my Firestone sessions I’ve not been disappointed. At present the count is: 1 screw-gate krab, 1 HMS krab, 1 snap-link krab, one skinny extender, 4 wires, 1 ice-screw, 1 belay device, 1 big sling and 1 pair of very nice and almost new Black Diamond gloves. So if you know anyone who dropped gear off Hells Lum this winter, unlucky! No, really, if you do, get in touch.
Posted by Gaz Marshall at 14:05 No comments:

For quite some time now I’ve had this fantasy. It lurks at the back of my mind. When I’m lying awake at night, wrestling with thoughts and memories and hopes and fears, it creeps from the shadows and pushes it’s way into my consciousness. It’s a project. A challenge. A goal. In order to keep my head above the rising tide I’m in need of something to keep me occupied. And I’ve found it.

Back in the long hot summer of 1995 a young chap called Jules Lines was working at the Landmark Centre in Carrbridge. A keen climber, Jules had spent years cutting his teeth all over the crags of Britain, and had emerged as a leading light in the devious arts of hard slab climbing. For those not in the know, in rock climbing terms, a slab is a wall that is less than vertical, so the challenge comes not from being able to hold on, but from being able to trust the friction of your shoes and to balance your way up on tiny edges. 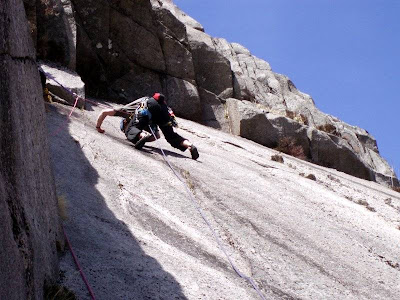 After work each night, Jules would head up to Cairngorm, cross the plateau, and drop down into the mighty cauldron of the Loch Avon Basin, home to acres of blank granite slabs. And here, like a kid in a sweet shop, Jules set about filling in the blank sections of the crags under the cloudless skies. Among the many routes Jules climbed that summer, the hardest was on the Lower Slab below Hell’s Lum. At E7 6b, Firestone was created; a direct line up the blankest part of the slab. The description in the SMC Cairngorms guide says it all:

“A slab climbing test piece at the right end of the Lower Slab. Climb the obvious pink water worn streak directly up the dark but notably smooth section of the slab. Holdless and protectionless.”

And I’m going to climb it.

So, why on Earth have I decided that this is a good idea? Well, It’s pretty simple really. First and foremost, the Loch Avon Basin is one of the most beautiful places on this planet, so I’ll use any excuse to spend time there (it’s actually part of the RSPB reserve I work on, so I could claim to be doing ‘work’). Secondly, I’ll gladly confess that I love slab climbing (this is a much misunderstood and maligned climbing style). Thirdly, at E7 it’s clearly sick hard and a tad on the dangerous side, so I have no bones about working the route to death from the safety of a top rope before deciding if I want to lead it (if you’re a staunch ground-up, on-sight climber, you’re more than welcome to come and get the first on-sight ascent, otherwise, no complaining please). Fourthly, I’m in need of a long term climbing project; something to keep me busy; something really hard that I’m going to have to fight and stress and worry to attain. 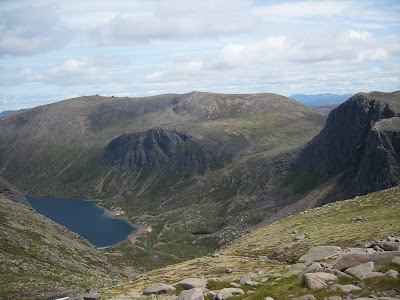 I’m hoping that as the summer begins and the snow starts to clear from the hills I’ll be able to spend the long evenings and weekends working on the route, so I’ll be updating Soft Rock with my progress and thoughts on the gargantuan challenge that I’ve set myself.

Fasten your seatbelts, it could be a bumpy ride……

Posted by Gaz Marshall at 09:06 No comments: 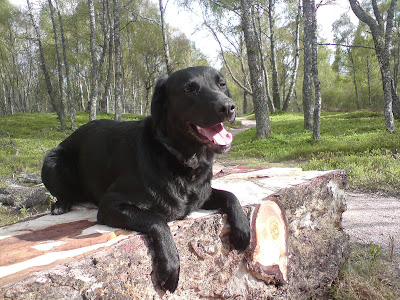 King of the Castle: Harry Hammond
Life is pretty simple really. Do what you love as much as you can, struggle through the rest. Young Harry here is a pretty good role model for this way of life. Eat, sleep, exercise, repeat. He’s been a steady companion ever since moving across to Aviemore. Whether it’s been trotting at my heels when out running, protecting my lunch at the base of the crag or snoozing by the fire after a day in the hills; always the same wag of the tail, the same lolling pink tongue; he’s a happy little camper.

As I write, he’s passed out on his bed. He’s been out on two runs tonight, once with me on the Burnside circuit, once with Steve up to Coire an’t Schneachda. He’ll probably get up in a bit, have a bit of a stretch, go outside for a piss, scratch himself, have some food, then go back to sleep. I’m not sure about you, but that sounds like a bloody good evening to me. Simplicity; is it the route to contentment? 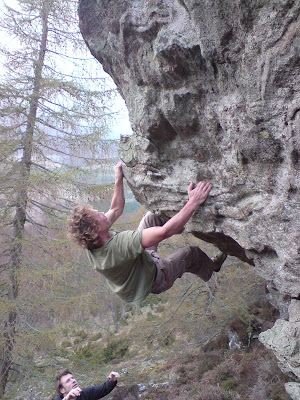 Jules Lines showing off his hidden boulder at Pityulish. 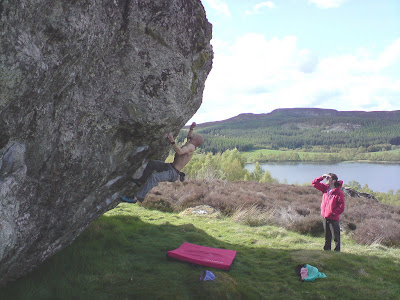 Not long after wandering if he could climb Font 6a, Stevie Hammond ticks The Dude (Font 7a) at Ruthven.

Despite the recent moisture in the Highlands, I managed to maintian my Weekend Warrior status with a couple more days on the rock. Blair, Jenny and I spent Saturday at Dunkeld in Perthshire, sheltering on and under Upper Cave Crag. I just about managed to contort myself up Coffin Corner before the precipitation set in, then spent the rest of the day getting a work out on the perma-dry sport routes. I was very inspired by Hamish Ted’s Excellent Adventure, which weighs in at an honest 7b+. Long, steep and sustained, it’s the perfect route for a trad climber to train for, and I know that if I’m one day fit enough to lead it cleanly I’ll be fit enough to get on most of the routes that inspire me in Scotland. So, I’d better get training.

Talking of training, I think the long evenings down the wall this winter are starting to pay off. A few weeks ago I was chatting to some fellow climbers in the pub and they asked what my aim for this rock climbing season was. My reply was to onsight (cleanly climb with no prior knowledge of the route) a route graded E3. Well, I’d better have a re-think, because we’re only a month or two into the Highland rock season and I’ve already achieved my aim. On Sunday I just about managed to onsight Dracula, a famous E3 at the lochside Duntelchaig crag, South of Inverness. As the wee video below testifies, it was a pretty desperate affair. Pumped, eyes on stalks, I swore and grunted as my feet skated off and I cut loose and slapped my way to the final holds. But, it was simple: I got from the bottom to the top, and for that moment, when I was sat safely at the top, as the adrenaline began to subside and my heart rate began to settle, I felt content. 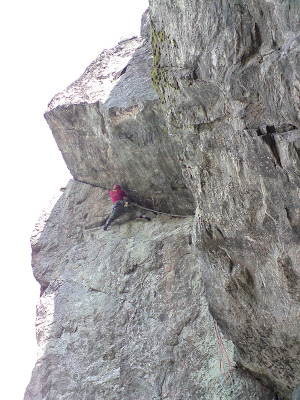 Fighting on Dracula. It's steeper than it looks!

Off subject a little, but still within the realms of contentment and simplicity, I stumbled across a beautiful show on Radio 1 a few weeks back. Rob da Bank and Friends were having a campfire special, showcasing a load of contemporary British folk artists. The first band on, Mumford and Sons, really took me by surprise, and I instantly downloaded all their EPs and have had them on repeat ever since. Get your ears round them and see what you think.
Posted by Gaz Marshall at 15:02 1 comment:

"So foul and fair a day I have not seen,"
So said Shakespeare through Macbeth, and so say I through my Gore-tex.
Despite the unfurling of the new season's leaf, the ululations of the cuckoo and the first clumsy steps of the lamb, the weather-watching and rain-dodging is back in effect. Like a rainy playtime at primary school we’ve been sent back inside to make-do with books and building blocks. Big plans have been hung back on the coat hook and we’re left to stare through the windows as our dreams wash away for another weekend. We got snowed off Ardverikie Wall on Binien Shaus, and even the perma-dry Heather Hat in Glen Nevis was dripping. There’ll be four horsemen on the horizon soon.

In the mean time, while we all wait for a colossal high pressure to return and sit unmoved over the Highlands, I’ve been forced back to the little stones and the pretend stones. Ruthven, Cummingston, Duntelchaig, Extreme Dream, they trip off the tongue. 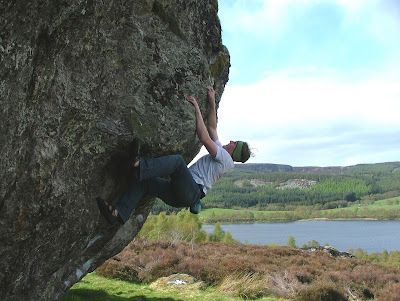 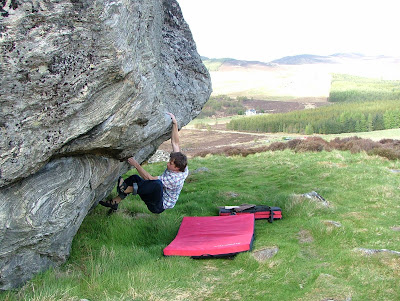 Me on Sloping Off at Ruthven (Pic: Chris Edwards) 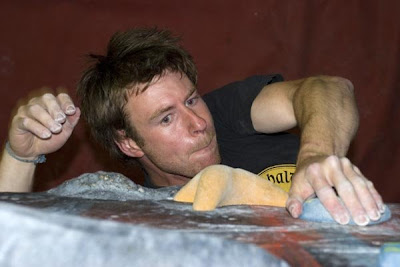 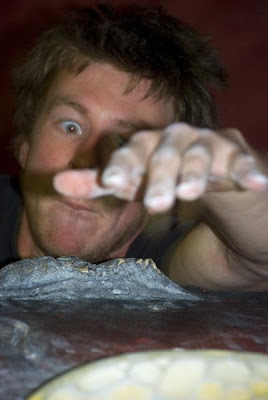 At the wall the other night Pete Hill asked if he could take some snaps of me while I worked on numerous heinous problems. Even I'm scared of me now. (Pics: Pete Hill)
Meanwhile, only my dreams keep me sane. Dreams of long evenings and the sun setting over the sea. Dreams of sitting at the top of a rock, heart racing, hands shaking. Dreams of laughing. Dreams of crying. Dreams of the ammonia-stench of sea cliffs and the ever-present dry mouth of fear. Of beckoning waves and the promise of silence beneath them. Dreams of uncertainty. Of strength of will versus strength of fingers. Dreams of standing still and watching hills and lochs march on forever. Dreams of hopping, skipping, bounding, over bogs and burns and boulders. Dreams of yesterday and dreams of tomorrow. Of always and never. 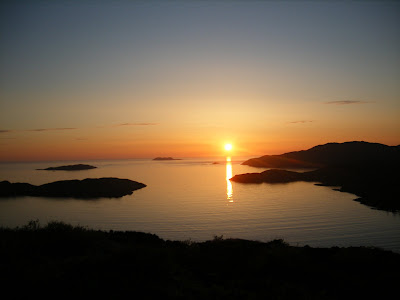 Posted by Gaz Marshall at 16:17 No comments: