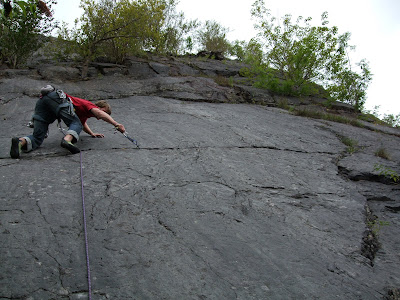 Normally, trips home to the West Country are all about seeing my folks, enjoying the local Butcombe Bitter in traditional hostelries, eating deep fried pork fat and catching up with neglected friendships. While a certain amount of this has been partaken of, this time round I've actually got some climbing done too. Perfection, non?

Bouldering on the mighty (i.e. humbling) Saddle Tor on Dartmoor acted as an effective exfoliant for any excess skin I happened to possess, and despite only fully completing one problem in a whole morning, I drove home from The Moor feeling like a better (more bloodied) person.

Now, these days I climb quite a lot, and while I'm no-where near as good as I should be for someone that obsesses so much about this absurd sport, it's quite nice that I'm occasionally reassured that I'm not as bad as I used to be. A few weeks back I was bouldering on the Heather Hat in Glen Nevis, and was able to make relatively light work of some of the problems I used to sweat over. Progress. Fortunately, the same thing happened t'other day at one of Somerset's more esoteric bouldering locations (and that's saying something about esoterica). When I first started climbing I used to look at the roof of the cave at Weston Super-Mare's Toll Road Crags and think how great it would be if I could climb through it. Well, after no small amount of sweat on Thursday afternoon I found myself pulling on the finishing holds with a large grin on my face. Maybe all this obsession is paying off after all....

The next day I took a trip down climbing memory lane with Luke, the fella I learnt to climb with. Happy to explore more wondrous esoterica, we went to Fairy Cave Quarry tucked away high in the Mendip Hills, and climbed some of the obscure slabby gems hidden among the fast-emerging buddleia, before retiring to the pub and drinking more of Butcombe's finest. It's been a hard few days.

Posted by Gaz Marshall at 18:51 No comments:

It didn't take long.
I'd told myself that after doing Firestone I'd give the slabs a rest for a bit and climb some steeper rock. Bad weather and bruised feet kept me away from the hills for July, silencing the call of Cairngorm granite.
Time passed, my feet got better and the amount of sun started to eclipse the amount of rain. Then I heard from Jules, the undisputed king of Cairngorm slabs. "Yeah man, nice one on the Lower Slab. You should get yourself on some of those other routes on Hell's Lum, you'll love 'em".

A quick squizz in the guidebook reveals a few more of Jules' lines scattered around the slabby pillars and buttress' beneath Hell's Lum crag proper, so I head out for a recce.
Just being back in the cauldron of the Loch Avon Basin feels good. Strolling down Coire Domhain: the epic scene of rock, water and air. It's nice to be back. Standing beneath Firestone I trace the line and wonder what the hell possessed me to climb it. I gird my loins and solo Mars further left on the Lower Slab.

Back under the main crag I spy a route of Jules' called Devils Advocate. Perfect friction padding, and it even musters some protection. I'll return soon with a belayer.
To: Mark C
Yo, there's a route on hells lum i'm pretty psyched to try to onsight, would you be able to belay me one night this week? I'll owe you lots of drinks or belays or summat. Gaz
As ever, Mark's psyched so we meet up after work and crush the walk-in. Cool and dry, it's perfect for frictional endeavors. I'm feeling relaxed and ready, though I'm not sure why: this could end in another big ride. 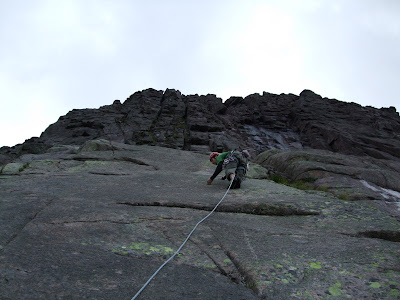 Committing to the crux, nothing to do but climb.
On the crux, high enough to hurt, still a way before the gear arrives, it's time to convert brain function from hope to trust. Hands sweep the grey pink rock, hunting greedily for a weakness, a fingertip ripple for balance. Flashes of yellow crustose lichen dapple the way ahead, runway lanterns. Don't think, don't hope: know. There comes a point where I realise there's nothing for it, no other way, empty the mind and climb.
Later, higher, happier, I shake Mark's hand and we start to walk home, one route closer to knowing. 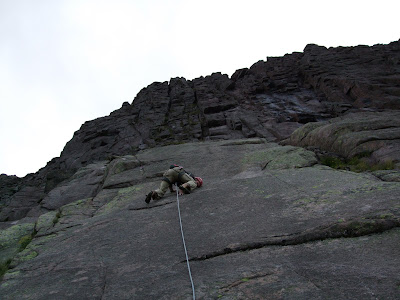 Mark finishing the crux; flashing the route on my gear.

A Matter of Style

From the outside, the sport of rock climbing looks pretty straight forward: you find a bit of rock and make your way to the top. What could be simpler? Well, what the casual observer doesn’t know is that it’s far from simple. Once you get sucked into this small, incestuous world you begin to realise that climbing is actually a hotbed of infighting, one-upmanship and ego, and for one reason: style.

Climbing is all about style (and, alas, I don’t mean trendy branded jeans or luminous lycra). By style I mean the way in which a climb is executed. Climbers, being self-obsessed pedants (me included) are keen to try to be the best they can be, and this means climbing in good style. Any old loser can get to the top of something in poor style, but it takes a good climber to climb the hardest routes in good style.
Getting to the top without falling off, placing all the protection on the way up, without prior knowledge, is the Brad Pitt of climbing style. Anything else comes lower down the scale, including working out the protection, watching someone else climb the route, pre-rehearsing the moves or falling off and trying again. Some would argue if the route is at a level of difficulty that makes the Brad Pitt style impossible then you shouldn’t bother with it, that by climbing in a poorer style you’re just reducing the route down to your level – beating it into submission. For me, though, trying the occasional route that’s miles above my current level is a great way to improve my Brad Pitt style climbing, and so long as it’s a route that I won’t one-day want to climb in better style, and that I’m not damaging the route for future climbers, everyone’s a winner. 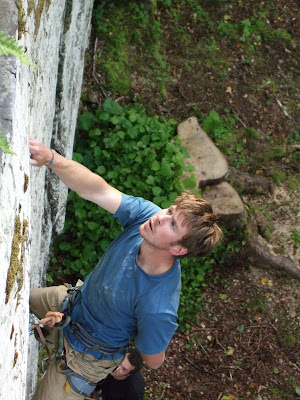 "Hey! Look! It's Brad Pitt. Oh, wait. It's not."
Over the last few weeks I’ve done all four of the above-mentioned cardinal sins on the same route; I’ve worked out protection, watched someone else climb it, pre-rehearsed the moves and fallen off and tried again. In the end though, after a few failed attempts I managed to lead The Art of Course Climbing (E5 6a/b) at Farletter Crag on Wednesday night, and it was bloody great fun. It’s a short, very gently overhanging schist crag, and being steep and fingery is not a style of climbing I’d profess to excel at, so it was all good training for something…. 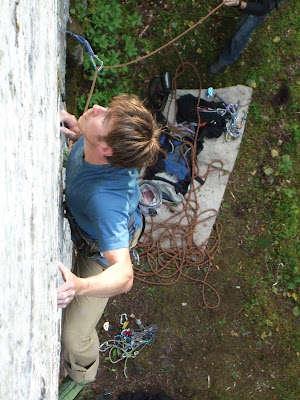 Mid-flow on The Art of Course Climbing 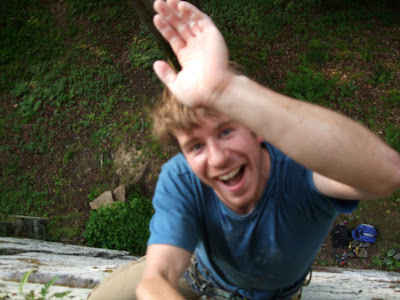 High Five!
Posted by Gaz Marshall at 10:27 No comments: