I think I write this exact same blog post this time every year.  Summer stagnation.  To be fair, I've probably picked a good time to have a slightly tweaked A2 pulley and to be planning a wedding, as the weather really has been unhelpful.  It's not been crap in a dramatic, torrential downpour kind of way, but more in an insidious, cold, blustery showery kind of way.  I mean, you probably could have got out quite a bit if you had endless free time to sit out the showers, but for me it's just been easier not to bother. C'est la vie.  You can hardly live up here and complain when it rains.

Don't get me wrong, I've done odds and sods: time spent cleaning forgotten local routes and exploring for hidden rock. I'm yet to find the new Ship Boulder lurking in the woods, but I've not given up yet.  I've even managed a bit of climbing too (in addition to laps of open-handed circuits on the board).  The trad highlight would probably be The Hill at Creag Dubh, a great voyage through the center of an impressive historic wall.  On the sporty front the best (and only?) route for a while would probably be Shakin Like a Leaf, a classic Cheddar Gorge 7a that I did on a balmy West Country evening while down south visiting family.  Due to a slightly tweaky finger I've been laying off the bouldering recently, but while south I visited the Forest of Dean's sandstone blocks at Huntsham and came away impressed. Local classic The Golden Bicep 6C+, with it's slopers straight out of Fontainbleau, was probably the best of the day .

As ever, the dreams of an endless sunny summer haven't materialised quite yet. My cunning plan had been to bite the bullet and learn how to jam, and I was looking forward to dropping the ego and getting mauled on routes with lowly grades.  It's something I've always shied away from and am pretty bad at, having always been drawn to the thin, delicate end of the spectrum rather than honest burly tussles. I think that my trip to Arapiles last year really showed up my lack of competence and confidence in climbing in this style and the reality of trad climbing is that you need the full repertoire. I'm hopeful that the sun will eventually shine for long enough on a weekend and I'll be able to traipse to the sandstone west and have a fight.  In the meantime, is that a something between the trees? 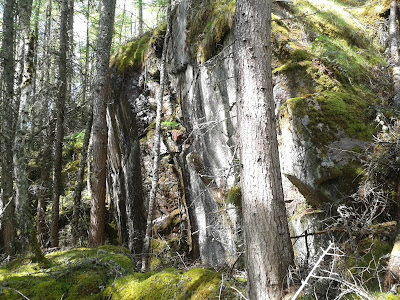 Posted by Gaz Marshall at 19:55 No comments: