Strongbow, and other tales. 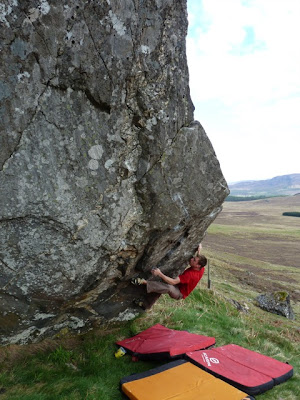 Strongbow at Laggan.
Who said there's no good bouldering in Strathspey? (Photo: Dave Macleod)
It's with continual jealousy (and awe) that I do my endless rounds of website checks - blogs, forums, news updates, video sites, photo pages - and find out what people have been climbing. Whether it's mates of mine, international uber-wads or folk I've never even met or heard of, there's a constant feed of psyched climbers out there, getting out, pulling down, and documenting it - a continual source of inspiration for lowly weekend warriors like myself to tap into. Of course, it works the other way too. When the rain is pattering on my window for the third day in a row and I haven't ticked anything of personal note for some time, it's a torment to see the blue skies and big ticks, a mockery of my live-for-the-weekend attempts at being a climber.
With this in mind, I have to sit and think hard about what I've been up to, what's of note and whether any of it is worth blurting out to the blogosphere. I'm hardly setting the place on fire, and between the constraints of the working week and the recent Highland weather I'm pretty pleased that I'm managing to get anything done.
Traddage:
Last weekend Sarah and I took a quick trip to Gairloch, and after a morning admiring the arboreal verdance of Inverewe Gardens and enjoying coffee and cakes, climbed a few routes in Gruinard Bay. The highlights were Right Charlie at Jetty Crag and Root Beer at Inverianvie Crag - both routes I'd been aware of but not done on previous visits. I'm finding more and more that to improve at trad climbing you need to do lots of it and build up momentum, and given the crap weather that's not really been possible yet this year, so it's nice just to keep ticking over.
Sportage:
After being drizzled off trad routes at Loch Tollaidh on Saturday, Steve and I headed to Creag nan Luch for some redpoint action. We've had a succesful few sessions here after being rained/frozen/blown off trad crags, and this time I opted for Murdo's 7a+ slab Unfinished Business and was surprised to get it first redpoint. I think the grade is a bit contentious as it be easier the taller you are, but I definately found the crux pretty dang hard. Steve ticked the pumpy 6b Astar.
Boulderage:
I'm just back in from ticking my summer project - a beautiful steep curving arete at Laggan called Strongbow, and weighing in around the V7/7A+ mark. I'd half-heartedly tried it a few times earlier in the year and knew it would climb really well, I just couldn't do it. Dave Macleod then did the first ascent when I showed it to him in April, and since then I've had 5 or 6 sessions up there specifically trying it. Each time I've come away one step closer to the tick, refining the sequence and getting stronger and smoother on it. On my last session I kept failing on the same move but could do all the others almost every time, so this time I had a good long think and totally changed my foot sequence and hey presto! It worked. It's a big tick for me, as it's a brilliant problem - steep, technical and great moves - at my own little stomping ground of Laggan, and despite Dave doing it first, I found, cleaned it, and worked out the moves, and it's my first 7A+! (Dave reckoned that was the grade, and who am I to argue? Can someone come along and repeat it to confirm please?). I've taken quite a bit of footage of my sessions, so will edit something together and post it soon, but here's Dave on the FA: 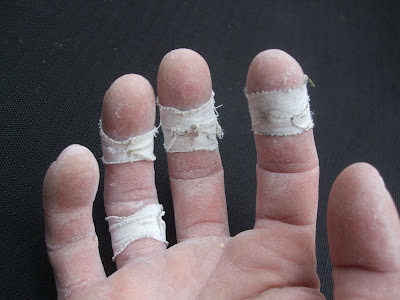 I could feel the hold crumbling under my fingers and knew I was off straight away. The familiar lurch backwards, the milli-second flap of stomach butterflies, the sub-concious grab of the knot, the peculiarly unattached "what's going to happen next?" sensation. Of course, all that happened was that I fell a few metres onto a nice shiny bolt, but taking a lob is still always exciting. Serves me right for using the wrong holds.
I got the route, Match if You're Weak, next go. Another of the great routes on Moy's Big Flat Wall ticked. Now that the trees are gone this place seems to be becoming the most popular crag for miles around, especially now Mr Nisbet has added a couple more easy routes. Apparently it's not uncommon on a sunny evening to see a queue for Little Teaser, the crag classic 6b+.
Other than a couple of exciting-but-safe run-out routes at Farrletter on a sunny evening last week, the weather hasn't been conducive to getting out much. ***(As an aside, why do people only seem to top-rope at Farrletter? It just polishes the routes and drops a load of shit on them when the rope erodes the top of the crag. All the routes I've done or tried have been safe enough. Either man-up and lead or bugger off to somewhere the routes are easier, like Kingussie. Rant over)***. I'm getting plenty of exercise doing montane bird surveys (basically paid Munro-bagging and bird watching), so shouldn't complain too much, I guess. I'm hoping that when my contract finishes at the end of July there'll be a month of brilliant weather to play with, but if August is anything like last year, I won't hold my breath.
Posted by Gaz Marshall at 11:49 2 comments: