I'm very rarely ill and have been very rarely injured, but here I am, cut down in my prime by this vile wintry pox. The flu. Or is it just a bad cold? No, it's bronchitis, surely. I'm not used to being incapacitated, what are you supposed to do?

I'll sit here and grumble quietly to myself and polish off the last of the festive confectionery. You don't mind do you?

Well, that's 2010 been and gone. I was proudly in bed by 12.15 on new years night. Bah humbug, cough, splutter, grumble grumble. Actually I rather like waking up on the first day of the year hangover free. Trying to make a big event out of something that just isn't always leads to a disappointed melancholy when it's all over, all you have is a hangover and a mild feeling of depression to show for it.

From a climbing perspective, 2010 was a funny old year. I'm chalking it up as a year of consolidation, rather than one of progression. I don't think I did much that was harder than anything before, I just did a bit more of it than previously. I bouldered and sport climbed more than before - mainly thanks to the rain and convenience, but also because I was introduced to the endless supply of Torridonian sandstone and Lewisian Gneiss in the North West. Trad started OK but never really got going as the summer monsoon stepped in.

Hopefully 2011 will be a chance to up the trad output. To do this I need to be ready to pounce as soon as the Highland spring begins. The pre-midge dry season is so short and arrives so soon after winter it's hard to be ready. A winter of pulling on plastic can only do so much good as it's my head that always lets me down first. I think a large amount of practice falls and sports mileage in February and March are required. And of course there's the growing list of sport routes and boulder problems that will require serious attention if they're ever to be completed, plus getting a job, plus going winter climbing, and learning to ski and staying on top of the running. Tricky tricky.

In the mean time, Jones and I have been down in Staffordshire and Somerset visiting family. Both our contracts ended just before Christmas so we're currently free agents (anyone got any work?). I've managed to slink out into the cold a few times for a quick boulder. Un-named tidal limestone problems at Brean Down were the best I could manage in Somerset but Staffordshire's Roaches have been a bit more accommodating. On Christmas Eve most things were still covered in snow but C3P0 on the Spring Boulders was worth the drive alone. Yesterday things were dry but baltic so I didn't stay still for very long and The Staffordshire Flyer and Wild Thing were the highlights among lots of easy circuit problems. We'll be back home in Aviemore by the end of the week when serious job hunting and playing in snow can commence.

Happy New Year y'all.
Posted by Gaz Marshall at 11:36 No comments: 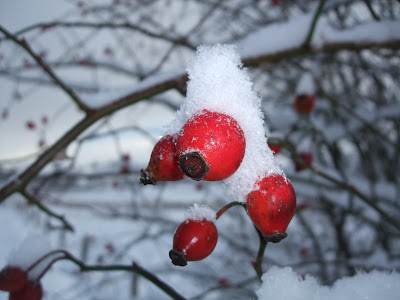 The nature of winter rock climbing generally means projecting hard boulder problems and sport routes. Short cold days aren't conducive to casual days of tradding, so I spend my time attempting to make incremental gains. Sometimes it feels like banging my head against a wall, but I know that the feeling of hard-fought success will be worth it if I complete even one of my growing list of projects...
Here's the latest Soft Rocking.... 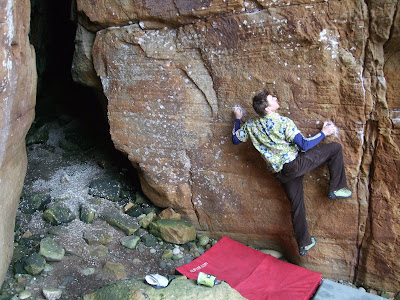 It's pretty rare that I get to report a success, but as previously reported, Masonic Fingershake at Cummingston finally gave in. 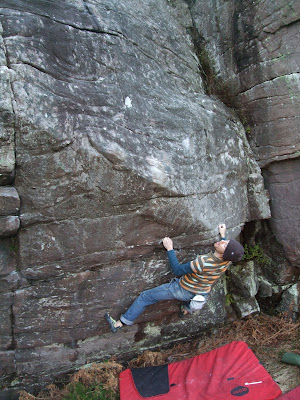 After the turbo-thaw Torridon was back on the agenda. There's not much left for Richie to do at the Celtic Jumble, so now he has to work on the desperates. Here he's trying Dave MacLeod's Frantic. 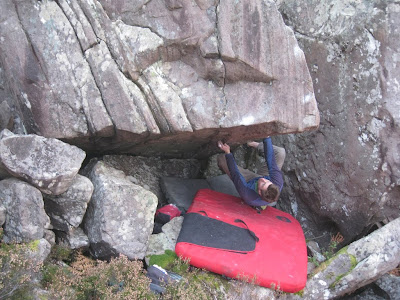 After a rapid flash by Richie, I managed to scrape myself up Mike Lee's Girls in Their Summer Dresses. (Photo: Richie Betts) 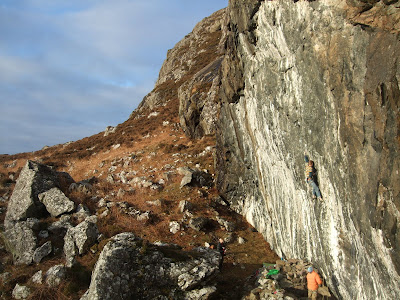 Another Am Fasgadh Sunday Session. Here Rich battles with Bog Talla. Given The Sheild's regular wetness I'm switching my attentions to the drier line of Primo. It's the first route I've been on that I've not been able to do all the moves after the first session. I think this might be a whole-winter seige. Bring it on.

Posted by Gaz Marshall at 15:10 No comments:

Mixed Feelings in the Dark

I get mixed feelings as the cold continues to grip onto Scotland and starts to squeeze hard. Every man, woman and their dog in Aviemore seems to have donned their luminous baggy clothing and thousands of pounds worth of skiing kit (how do they all afford it?) and joined the queues on the pistes.
Part of me feels like I should too, or at least be out ticking winter climbs. I mean, why live in the Highlands and put up with it's generally crap weather if you're not really fussed about playing in the snow? I'm not sure what it is that puts me off. I guess sharing the same small bit of hill with every Tom, Dick and Chummer isn't exactly my idea of a fun time, regardless of how much you have to pay on kit and up-lift to get there. And as for winter climbing, it still holds an attraction, in the right place, at the right time, but wading through ball-deep avalanche debris to dig around in powder and stare into the same mist-obscured corrie isn't it. Give me a bit of freeze-thaw, some sunshine and a new mountain to explore and I'll probably be a bit keener.
So, I've been skiving off from winter and making use of the cold dry northerly by bouldering at Cummingston. Last weekend poor Chris was up from Edinburgh and heavy snow meant we couldn't get across to Ben Nevis. Naturally we ended up sheltering in the big cave at Cummy, as you do, and it was in good nick. This Saturday I returned with the Betts but a slight thaw meant it was a grease-fest. All except for the secret weapon: The Corridor. As luck would have it we were both armed with lamps to stave off these early December nights, so were able to light up the through-cave between Doubt Wall and the big Fingerlicker cave, and not only was the rock dry, it was beautifully wave-worn and harder than the rest of the crag. Time to make hay.
One problem I found looked fairly innocuous but kept kicking me to the floor. Slapping up an arete, spanning away to a pinch and stubbing blindly for a rounded-toe edge under a bulge. It looked so easy. Eventually Richie showed the way and just as I started to make progress the batteries waned and the shadows grew and we had to bail, blinking into the daylight. Empty-handed. 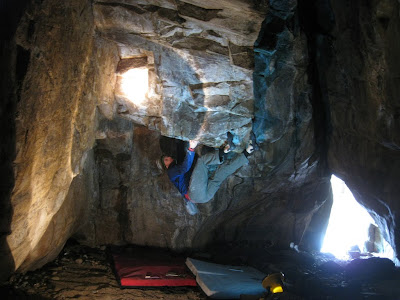 The future of raining/snowy days? Richie in The Corridor (Photo: Richie Betts)

With charged batteries, rested fingers and the return of colder air I went back on Sunday and saw off the problem. I called it The Enemy Within, and assume it will never be repeated cos it's in the dark, which is a shame really. Afterwards I put the cherry on my already pleased cake by doing Masonic Fingershake, which I've tried on and off for about 2 years so was rather chuffed. 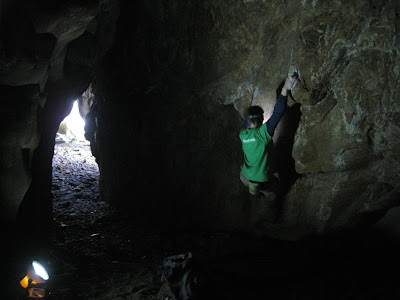 Quick! The batteries are running out! Me trying The Enemy Within on Saturday. (Photo: Richie Betts)
Posted by Gaz Marshall at 12:52 2 comments: