The Rough with the Smooth

The seasons have seen sense and scoured the hills clean of any climbable snow, and with the convenient arrival of a two-day high pressure that coincided with the weekend, traditional November activities have ensued. Cold, dry weather makes for good rock friction, which is perfect for bouldering as you tend to use smaller and crapper holds than in regular climbing. They also lend themselves to bouldering over roped climbing because if it’s freezing you can just jump off and run around to keep warm – a luxury that ropes don’t afford.

This morning it was clear that the rock was going to be ‘as sticky as shit on a blanket’, (sadly not my own quote), so I packed my sandwiches and finger-tape, donned the obligatory t-shirt-over-thermal and beanie and jumped in the car. Though possibly seen as a lonely activity, I really like taking myself off for lone bouldering sessions, especially when it’s a blue sky day and the boulder is perched on a Highland hillside. Living in Fort William I was pretty spoilt to have Glen Nevis as my playground, but now, as an East Highlander, I’ve got the hotspots of Brin, Ruthven and Duntelchaig (almost) on my doorstep.

After getting a serious big-up from various guides and respected crankers I decided to navigate the lanes to Loch Ruthven RSPB Reserve (famed for its Slovenian Grebes in the spring and summer) and dragged my pad through the heather to the Ruthven Boulder. Psyche. 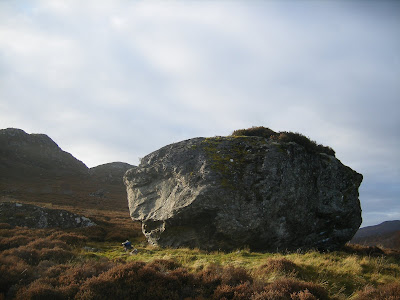 The hulking mass of Ruthven Boulder
Hours later, I dragged my weary body back to the car. I checked over my chalk-engrained, bloodied and calloused fingers while tearing off strips of finger-tape before turning the key in the ignition. I smiled all the way home.

It came back again, but this time colder, whiter and windier than a few weeks ago. Piled snow traces the roadsides and laden bows droop overhead. Like the slave that I am, as soon as the words “cold air” had escaped the lips of the forecaster I was thinking about snow crunching underfoot, ice tools hooking into cracks, and the ‘screaming barfies’ - that’s hot-aches to you and me. Despite two nights of heavy drinking at a conference, followed by next to no sleep, I managed to drag myself out of bed on both Saturday and Sunday and blunder through the unconsolidated powder and ankle snapping boulder fields of Coire an’t Schneachda in pursuit of more early season mixed climbing.

On Saturday Will, Alex and I climbed Pygmy Ridge, which I had done before but still found to be great fun. On Sunday Neil and I climbed The Seam, which proved to be worth the wait and, incredibly, Neil’s seventh route of the season so far. Even better, it’s his first season of winter climbing. 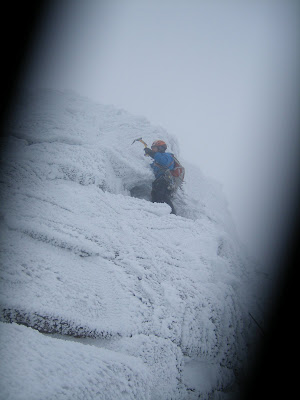 By Sunday night I was a zombie, parked firmly on the sofa with a tube of Pringles by my side, a mug of tea in one hand and the T.V. remote in the other. Gloves, hats, ropes, jackets and boots gently steamed on a drying rack in front of the fire and Harry the dog snuffled and snored in his sleep. Just before going to bed I looked out of the window. It was still snowing. I smiled all the way into my dreams. 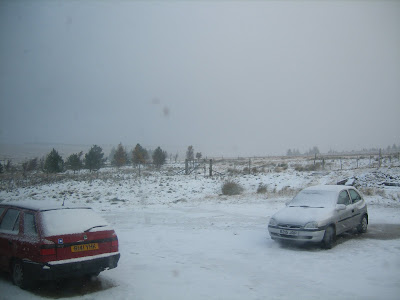 The last week in October in the Flow Country

No sooner had the very brief running season come to an abrupt halt with the premature end of the OMM, when snow started to fall and thoughts of scratching about in the mountains began to appear. Early birds did some serious worm catching with new routes and impressive repeats being reported before November was even a day old. What with having to earn a living, I was delayed until the weekend until I could get my share of the cold stuff but the 08/09 winter season kicked off nicely on Patey’s Route in Coire an’ Schneachda. I was climbing with Andy Lole, who I know from a trip to Pabbay a few summer’s back but hadn’t seen for ages. It was good to catch up on gossip and libel as we waded through the unconsolidated powder. Despite traditionally being an ice line, Patey’s Route is good value in early season mixed nick, and we had a thought provoking crux on each of our pitches. 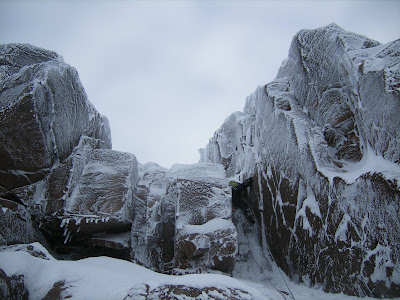 Andy Lole Chimneying up the start of Patey's Route (IV,5 ish), Coire an't Schneachda
So, now that the first route is in the bag, the mind is starting to turn into winter mode, checking forecasts, conditions and webcams, and being entertained by the spurious, sublime and ridiculous bullshit smeared liberally across the UKClimbing.com forums.

The other major change which is yet to be mentioned on the hallowed pages of Soft Rock is a professional one. I’ve managed to land the position of Senior Research Assistant at the RSPB’s Abernethy Forest Reserve, just north of Aviemore. It’s a twelve month contract of field and research support work in the shadow of the Cairngorms, so I’ve moved into the Aviemore version of the Crucible of Psyche. My landlord co-founded Extreme Dream, the climbing wall in Aviemore, with Scott Muir, and previous tenants have included Andy ‘the turner-mator’ Turner. I think I’ve got some training to do. 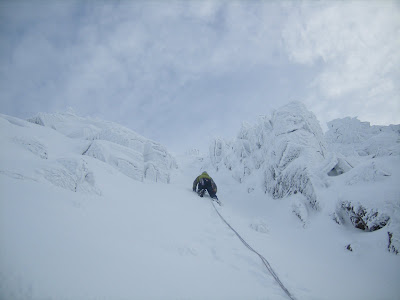 Andy on the easy slopes above Patey's Route

So, come snow, ice or pristine dry granite, there’s a psyched climber in Aviemore with dossing space. Drop me a line.