It’s funny how things go. You anticipate and expect so much. You plan, you stress, you strain, you sweat and you train, and then, just like that, it’s over. Like a climbing project, you always inflate it in your head until it feels like a massive challenge, but when you actually do it, it doesn’t feel like such a big deal.

I’d be lying if I said I hadn’t been worried about competing in the OMM this year, but it seems like a healthy dose of fear was needed to kick my arse into gear. Somehow, and I’m still not really sure how, Duncan and I came 9th overall in the Elite Class. Given that we were initially thinking that simply completing the race would be worthy of celebration we’re pretty pleased.

So, what was it like? Well, let’s put it this way, I won’t be volunteering as an ambassador for the Elan Valley tourist board. The place is one big bog, covered in a thin veneer of bog, surrounded by a load of bog with bog in the bits between the bogs. Shoe-sucking, knee-deep, peat-black bog. Okay, I’m probably overdoing it. In fact, it’s not all bog, because there are the hundreds of square miles of tussocky grass, waiting for an unsuspecting ankle to snap or groin to strain too. To my botanical mind the grass is called Molinea caerulea, or Purple Moor-Grass, but I’ve also heard it called Bastard Grass, Babies Heads and Policeman’s Helmets, due to the way it forms distinct and large tussocks and is bloody hard work to get through. The worst part is when the gap between the tussocks is bog. However, besides all this, the rolling nature of the hills and their relatively minor stature means that much of the ground is fairly quick to get around and there are no huge crippling ascents.

As seems to be becoming our hallmark, Duncan and I never really flew between the controls but managed to keep a steady pace and to keep on top of our navigation and route choices (mostly). We’ve done enough races together now to know the score: what kit to use (borrow other peoples expensive and very light gear), what to eat (smash, cheese, peperrami, and our top secret ‘Power Breakfast’) and what to carry (I get all the heavy stuff). I definitely had a couple of ‘sugar lows’ when I started to feel empty, but managed to fuel my way out of the slumps with Jelly Babies and energy gels, following on behind Duncan who seemed pretty indomitable the whole time. Bastard.

Now, at last, I can relax and revel in the one short time of the year when I don’t feel the urge to be out getting things done. It’s generally too cold, dark or wet for rock climbing, but it’s not cold enough for winter climbing and there’s no longer any need to be out running; the OMM has been and gone. Instead, let’s light the fire, put on the kettle and settle in with a good book…..
Posted by Gaz Marshall at 08:39 5 comments:

The End Is Nigh 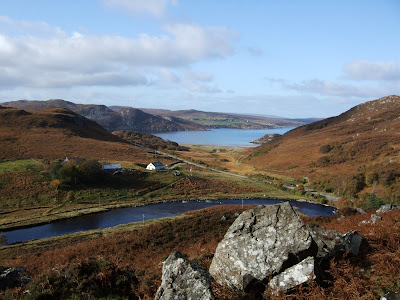 Autumn in Gruinard Bay
Time keeps slipping by and the big weekend of the OMM is now just a matter of days away. My training seems to have worked out pretty well, and I surprised myself by managing to come in in 17th place in the Pentland Skyline race, taking 2hrs56. Later in the week I managed to knock a minute off my Loch an Eilein round, making my time now 18.56 for the 5km trip (being dragged around by freakily fit Stevie Hammond did wonders here). Race partner Duncan came up from Edinburgh for the weekend and we managed one last run in the hills before a week of serious rest. Now it's time to make the final tweaks and arrangements - what to run in, what to carry, what to eat, how to stay hydrated, how much vaseline Duncan's going to put on his balls. All the big questions. 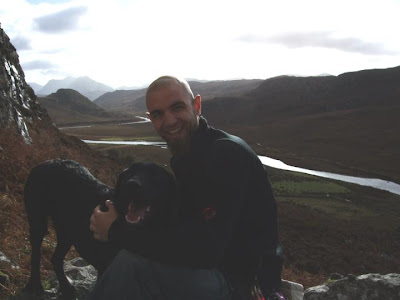 Partners in crime: Harry and Stevie Hammond living the dream 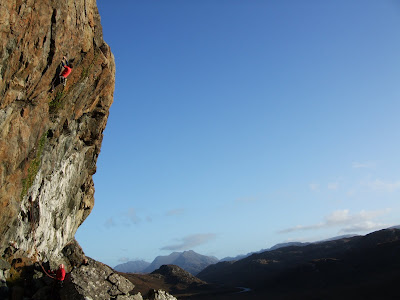 I've recently found that when one aspect of either my running or climbing is going well, the rest starts to suffer, and I've definately noticed my indoor climbing has gone all to cock now that my running seems to be going OK. Hoping that this wouldn't be the case on the real stuff I made use of a high pressure system hovering over Scotland, took a day off work and hit the road northwards to get some late-season rock routes done. Now, for those that know the North West Highlands you'll know that come sunshine or showers, this place is heart-stoppingly beautiful. What I hadn't expected was how much more spectauclar it is at this time of year: the kaliedoscope of autumn leaves, frosty white glens, golden hillsides, cloud inversions and clear blue skies, and with acres of rock to play on it could just be paradise. On day one Stevie and I joined Blair and Iain at Goat Crag in Gruinard Bay, where Stevie and I got a resounding spanking on the bolts while Blair and Iain showed us how to climb properly. On day two Duncan and I went to Stone Valley Crags south of Gairloch and had a great day on perfect gneiss trad. I managed to come away feeling pleased to not fall off Bold as Brass (despite my very best efforts), reassured that there's still some fight left in me.

I suspect that these will be the last rock routes of 2009 (unless winter stays at bay and we all do a big sun dance), and looking back over the summer, I feel fairly pleased with the way my climbing has gone. Here's hoping that I'll be able to look back at the race this weekend in the same way. 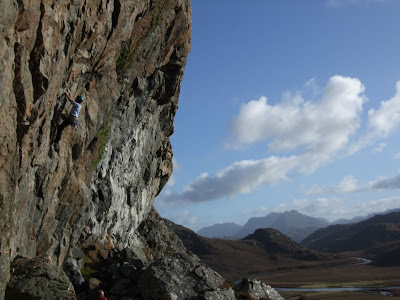 Blair cruising Freak Show (E5 6a) at Goat Crag with the Fisherfield Forest beyond.
Posted by Gaz Marshall at 10:13 1 comment:

I've been struggling to come up with an entertaining way to write about training for the OMM, but to no avail. So, I won't, I'll just give the facts. This is meant as a personal record, so I apologise for any boredom inflicted on the reader (if you exist).

Since Duncan and I decided to enter the elite class I've been fouling my little lycra leggings. We're gonna be rocking with the big boys so I thought that I should at least try to train properly. From my experience, success in mountain marathons is based on three things: route-choice/navigation, tactics (when to push, when to slow, what kit to use) and hill fitness. The first two of these come from race experience, practice and a logical approach. The latter comes from lots of hard work, and it's this that I'm concentrating on. Fortunately I've got an OK base-level of fitness to start from so I've simply been stepping up my running (frequency, distance and speed). Working a 9-5 week, I've attempted to split training into longer hill runs on weekends and shorter runs in evenings, balanced with regular bouldering and climbing sessions on nights off and one or two rest days. The plan is to keep increasing the workload until a few weeks before the race, when I'll start to taper it down and rest.

My longer runs have been:

Shorter week-night runs have generally been around Aviemore, up Craigellachie, round Loch Morlich or Loch an Eilein, the Challamain Gap or Burnside circuits. I've also started adding faster runs to the mix, either doing intervals of hill sprints on Burnside (sprint uphill 30 secs, walk back downhill for 45 secs, repeat to the top of the hill) or fast rounds of Loch an Eilein (5 km, P.B: 19mins51). So far, so good.

The next step is doing the Pentland Skyline Race just outside Edinburgh this weekend, then I'll try to speed up round Loch an Eilein in the week, then a small run on the weekend, followed by a week of pasta, resting and quaking in my boots.

Posted by Gaz Marshall at 10:25 No comments: