After the amazing week out on the islands it feels like I've not been up to much lately, Work seems to have kicked off and I've been working some horribly long days, driving all over the place doing upland bird and habitat surveys. It's nice work and my hill-fitness is benefiting but I'm not too keen on work getting in the way of real life.

So, when not sweating up hills in search of our feathered friends I've had a few sessions up on the mighty Ruthven Boulder. I managed to climb The Dude, the twin to The Big Lebowski and although both get given the same grade it's defniately easier than it's sibling. Last time up I had a fight with The Razor's Edge and lost a large amount of skin to no avail. Hopefully soon I'll be back for another wrestle and maybe the tick.

On the other end of the scale I had a big day on Saturday on the Shelterstone with Chad. We warmed up on The Pin, although 'warm up' might not be the right term in it's current dirty state. Then we linked the first 3 pitches Steeple into the first pitch of The Spire into the last few pf The Needle. The original plan had been to climb The Spire but a combination of being very dehydrated after foolishly leaving all our water at the top of the crag, approaching drizzle, and the general hardness of the fist Spire pitch sent us scuttling up the Crack for Thin Fingers and the Needle Crack instead. By the time we emerged onto the plateau in the evening light the dehydration was in full effect. Tesco's blackcurrant and apple squash never tasted so good. 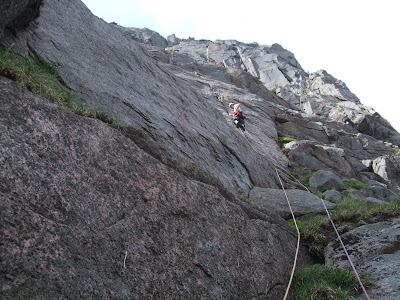 Chad starting up The Pin. 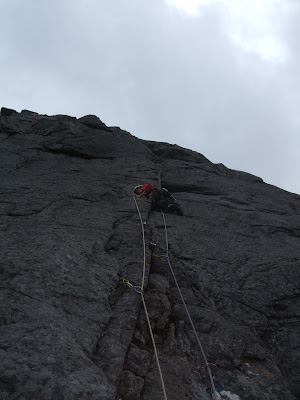 Chad on the first pitch of The Spire on our Shelterstone link-up.

I've found over the years that with the people I regularly climb with I'm often the stronger member of pair, and although this has some benefits it also means that I rarely get to follow harder pitches and to find out what to expect from them. It was good to finally climb with Chad because he's been climbing since I was a wee nipper and is fairly handy (he'll love reading this). Following that hard pitch on The Spire was pretty eye opening, and if I wasn't already, I'm pysched for the day when I can lead E4 in the mountains.

Posted by Gaz Marshall at 21:57 No comments: 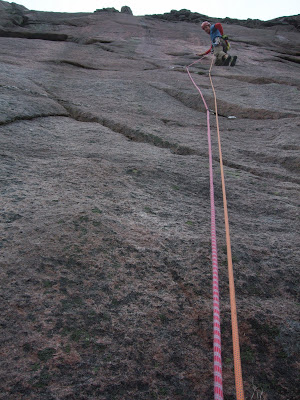 Pre-crux on Perestroika on the Glasnost Slab, Hell's Lum.
Finally! At long last enough snow has melted to allow the first Cairngorm route of the year. Jones and I took our kit for a walk last Sunday afternoon, in the hope that something might be do-able and came back succesful. Most of the crags are clear but there's still a fair bit of the horrible white stuff left at the bottoms of routes; Mess of Pottage still needs a bit of time before convenience evening cragging starts and most of Hell's Lum still needs a wee while.
It just goes to show how much snow we had this year because by this time last year I'd already had about 10 days up there. The amount of snow on Firestone on the lower slab is as high as it was when I first went over there in early May last year, and by this time it was clean and fall-off-able. Madness.
Anyhoo, the Glasnost Slab on Hells' Lum is in a weird-enough location to be snow-free below and seepage-free above so the balancy-friction account was opened with the esoteric Perestroika, direct up the beautiful red slab. After all the positive steepness of Pabbay and Mingulay it felt great to re-aquaint myself with the amazing marriage of Five-Ten rubber and Cairngorm granite, and the two didn't let me down. I'm back over there again tomorrow in search of classic ticks on the Shelterstone. Excited! 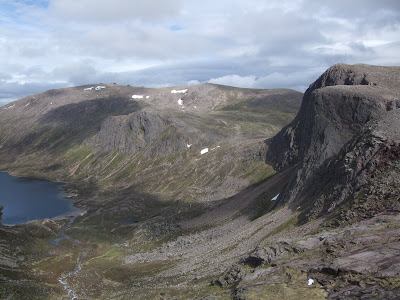 Posted by Gaz Marshall at 15:16 No comments: 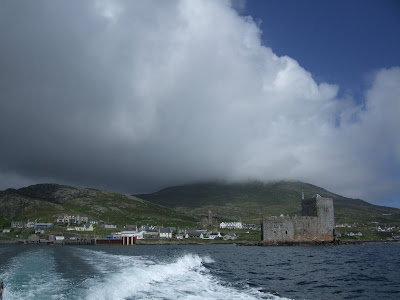 The beggining...
It’s coming back again and there’s nothing I can do to stop it. It just keeps happening: a great big grin is creasing it’s way across my face. It’s the strangest thing, but ever since I left Aviemore last Friday and started the long journey westwards I’ve been breaking into impromptu fits of smiling and general merriment.

Exactly when the first one arrived I don’t recall. It might have been as the ferry set off from Oban, or perhaps it was as we put in to Castlebay on Barra under a perfect cloudless Hebridean sky. I’m sure by the time we met Donald the boatman the next morning I was already in the grip of the affliction and grinning relentlessly, and as we shuttled loads up to the campsite on Pabbay I knew I was done for. From then on, the whole week was a shambles of laughter and fun. 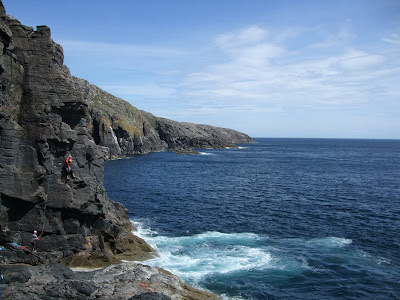 Rob and Helena 'balooning around' (his quote) on the juggy Sea An-enema in The Bay, Pabbay.

Topping out on Corncrakes for Breakfast on that first sunny evening as the seals sang across the waves and the lactic acid in my arms started to dissipate: that was a definite moment I recall it happening; climbing with Rob on the Banded Wall too. Then there was the day Alex, Rich and I were swallowed by the Grey Wall Recess twice and still came out laughing. 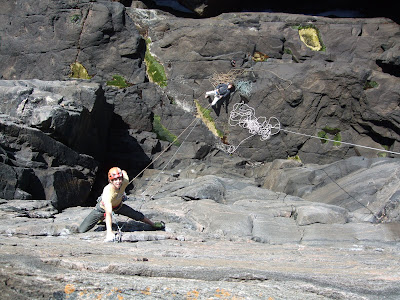 George having Corncrakes for Breakfast

The sensory overload of big sea-cliffs definitely seems to bring out the worst of this condition. The longer and more free-hanging the abseil; the more my mouth dries and hands tremble; the hotter the belay device at the bottom of the rope. The noisier and smellier the fulmars and razorbills and guillemots and shags; the closer the sea laps below and the bonxies swoop above; the bigger the yawning abyss below our feet and the steeper the ancient gneiss above: the bigger the smile at the end of it all. 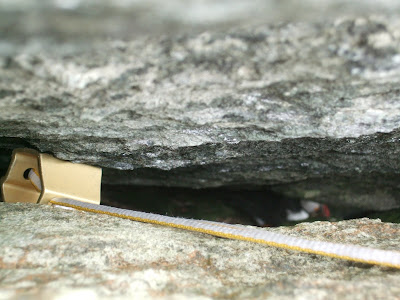 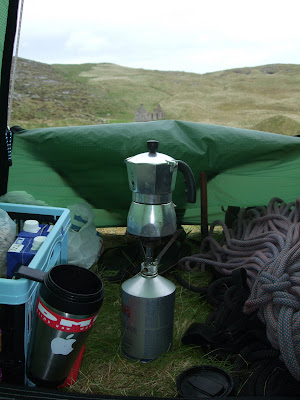 The harsh realities of island life: Espresso in bed and a terrible view.
Then on to Mingulay and it just got worse. A giant basking shark seen from the top of one of the most impressive cliffs in the country: Dun Mingulay. Outrageously big holds on an outrageously big cliff: Sula; a route I’d dreamed of for a long time. Even when ranks of nesting guillemots scuppered some of our plans, escaping up a VDiff above rough green seas and leaping white horses fed the fever. 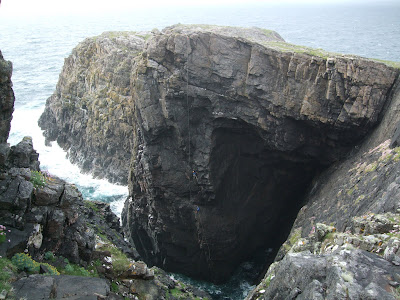 And it wasn’t just me, we all seemed to be suffering. The look on Blair’s face after conquering Ship of Fools, Rob extolling Fulmar Squaw's virtues, Sam wooping and hollering on the way down to The Boulevard and on the way back up Lost Souls. In the end, as we watched the locals descend into drunkenness in the traditional Saturday night knees-up in the Castlebay Bar we all seemed to be sharing the same condition: browned, sun-baked and wind-swept, greasy-haired and bloody knuckled, and grinning from ear to ear. 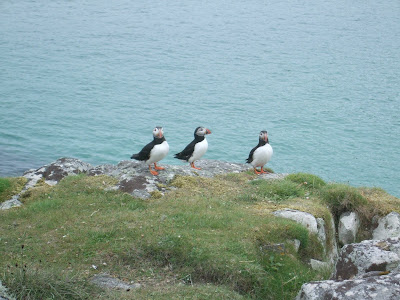