Isn't climbing brilliant? So many disciplines, so many challenges, so much to keep going back for. And in time, if you stick with it and try hard you might start to improve. But, of course, just when things are looking upwards and you start to get complacent you get a thorough kicking to remind you that the rock is still the boss.
Such was Saturday’s expedition to Covesea, an under-used sandstone crag on the Moray coast. Granted, I’ve not been able to do much trad climbing recently, and with it’s combination of seaside smeg, less than optimal rock and the odd sandbag grade I’m happy to take the beating like a man. 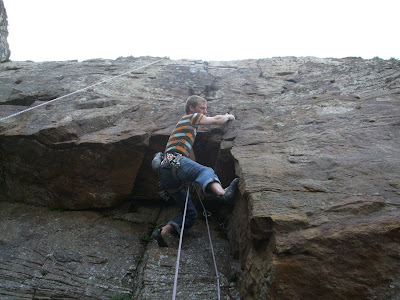 Richie on Banana Republic. 'One of the best routes here', which says a lot.

Then, on the flip-side I had a good evening at the Camel last night with Team Strong from Inverness. I made a quick redpoint of Inverarnie Schwarzeneggar, the F7a at the left of the crag, while Richie, Murdo and Andy ran laps on most of the other routes . Not a bad week for Andy, who made the first ascent of a new E7 at Glenmarksie Crag in Strathconon on Sunday (pic here) and did both Death is a Gift (F7c+) and Ubuntu (F8a) last night. He's done both these Camel routes loads before but this was the first time he'd done both in a session. Beast.
Posted by Gaz Marshall at 21:02 1 comment:

A Light in the Dark

A glimmer of light has flickered in the darkness of this wet July.

The wetness has continued and the only dry climbing I’ve found has been either up at the Camel or on the new Inverness centre of gnarl, the Bettsmaker. The Bettsmaker (Photo: Richie Betts)
After getting psyched for the pump-fest of Paralysis by Analysis at the Camel two weekends back I’ve been back up a few times. One quick trip after work with Dunc in a rainstorm, one with Richie under a curtain of drips. On both trips I was agonizingly close to the top, either fumbling the last clip or not catching the winner flake and flailing for nothing. Then on Saturday I went up with Jones for a quick try before hitting the bright lights of Inverness. Armed with all the lessons from my previous tries I eventually found myself at the anchor, so pumped I could barely hold the rope to clip the lower-off but grinning like a madman. Perseverance pays off once again. 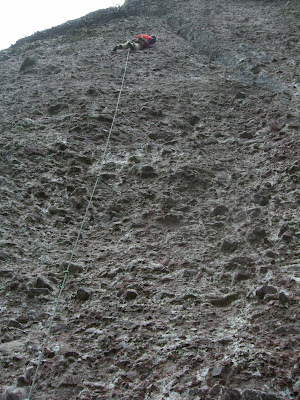 Sunday was even drier so the trad rack was dusted off and I headed north to meet Richie and find Invrness’ crag of the moment: Scatwell River Slabs. This impressive schist slab hangs above a swirling silt-dark pool in the river Conon, south facing and compact. It’s an unusual place to climb, in a way more reminiscent of sea-cliff climbing than a Highland outcrop as the routes require abseil access and the water gently laps away below as you teeter upwards. The only problem is that dirt and leaves collect on the slab and build up into a layer of slimy filth, under which it has languished for years. Then, up steps Ray Wilby with a wire brush and a whole lot of keenness and hey presto, there are some clean lines and even a new route to go on. We climbed The Tilting Yard (why are slabby corners so awkward?), The Joust (possibly the best route here?) and Ray’s new addition The Lance, then headed over to finish off on the Scatwell Boulder. 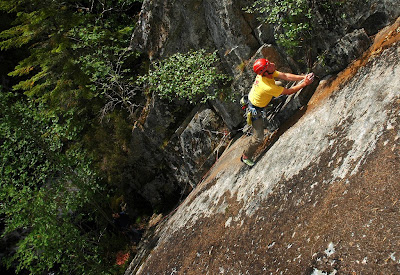 There we have it, some dry rock, some trad climbing and a ticked project, not too bad for a July weekend in the Highlands.

Posted by Gaz Marshall at 18:03 No comments: 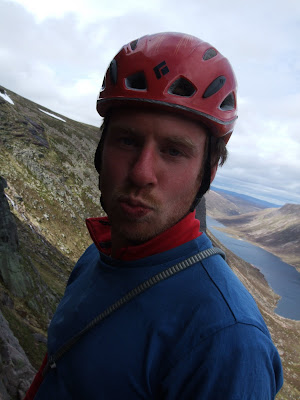 Are you local?
The longest day has been and gone; the summer keeps ticking on. As is the norm in the Highlands the warm dry early summer months have finally given way to unsettled showery ming. You've got to concentrate to keep getting stuff done in these conditions otherwise before you know it the crags will be seeping and the lycra will be out for the impending running season.
A mix of meteorological conditions has meant that all my climbing has been local to Aviemore lately. The snow-melt and dry few months finally brought the Cairngorms into condition so I've had one or two pokes up there, mostly already chronicled here. But contrastingly the last few weeks have been quite a lot wetter, putting the mountains out of favour,and not making sense to head too far away. So I've had to make the most of what I have nearby. Time to bring on the projects.
On the route front I'm psyched for Paralysis by Analysis up at the Camel. 30 metres of sustained overhanging face climbing and weighing in at F7a+, this route truly inspires. I'm dangerously close to the tick, having lobbed from the final bolt twice now. I later discovered the local beta is to do the last hard moves before the clip but I'm not sure I'm brave enough for that so think I'll use an extender to clip from better holds. Stoked!
On the boulder front I've been up to Ruthven a few more times. Having done The Dude I was keen for Barry Manilow as the next mission but it's pretty eliminate and a bit beta intensive so I plumped for The Razor's Edge round the corner. In classic project style the first few sessions felt absolutely desperate and I felt like I was embarking on a long-haul adventure but somehow, and much sooner that expected, it all clicked and it was duly dispatched. Obviously I need a harder project, so what next?
Posted by Gaz Marshall at 22:05 No comments: