This is the fifth day in a row that I've been stuck at home feeling sorry for myself.  It's that time of year, the capercaillie lek time when I'm supposed to turn semi-feral and sleep out in the woods night after night to be up early to count the birds strutting their stuff. But instead, part way through proceedings my Judas body has turned on me and crashed and I've been jibbering at home with a virus instead, marshalling the survey team via texts from my bed.

I've attempted to start writing this blog a few times while killing time but keep packing up because there's not been a whole lot to report lately. Work, work, family visits, a wedding, work and more work. Except, I guess, for the seismic-shifting news that Sarah and I are expecting a baby later this year.

But what about my already stuttering and minimal attempts to be a climber, which is what this blog is supposed to be about? What indeed. I already seem to have very little time to get out, and now with the imminent arrival of a bundle of laughs and vomit time will be even tighter. I'm doomed!

I'm seeing it as a two fold opportunity: In the short term before the yoof arrives I've got a clear deadline by which I want to try to achieve a couple of long held ambitions. In the long term, when we're in the midst of nappies, sleep deprivation, toddling and teething I reckon I'll have to be pretty organised and disciplined to keep getting sessions in on the board and to make hay when the rare opportunities to get out present themselves, so I expect I'll become very project-orientated (which I kind-of am already). Although trad headpoints are a bit of a cop-out, for the time-starved I can imagine that they might feed my rat admirably.

As ever with these things, I'm a bit nervous about setting my ambitions out in a public space like a blog, because then if I fail it's for all to see.  But conversely, it should act as a driver - I've said these things, now I need to do them. With a due date of 30th September, I've got 5 months.

Short term ambition number 1: redpoint 7c.
I've done a handful of 7b+s around these parts but never once tried a 7c, so it's a logical step. It's always seemed like a magic and unattainable grade, but I'm realising that I'm really bad for putting restrictions on myself like that and never just having a go.

Choosing the right route will be the initial issue, as it'll need to be somewhere other's are regularly going otherwise I'll never get a catch. I don't imagine this will be a one session project. Potential contenders would be Prow Lefthand at Goat Crag, the north's most famous at the grade and at one of the most popular and reliable crags.  Then there's Primo at Am Fasgadh, which I've done the first part of as Curving Crack, but Am Fasgadh isn't generally a summer venue.  More locally, Brin It On at Brin would be available for after work evening sessions, or maybe something at Zed Buttress perhaps.  Or what about Loch Maree's Super Crag?  Thinking outside the box, something at Dunkeld might be an idea, but it's a fair trek to have a project. I'm also on a family holiday to Yorkshire for a week in July, any soft touches at Kilnsey? 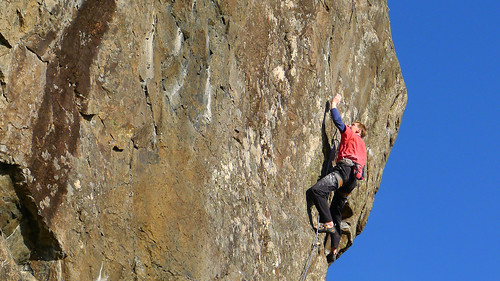 Short term ambition number 2: Onsight E5.
This is the one I'm far more nervous of.  I've only done a handful of E4s and still not that many E3s really, and in recent years my trad climbing has stuttered to stagnation with just a few routes done each year.  With trad, confidence is key and confidence comes with mileage, and trad mileage just comes with lots and lots of time at the crag.  In general, that's not something I have a huge amount of. But hell, if not now, when?  I've got a 10 day trip booked with Nick C at the end of May in which I'll hopefully make a good start to clocking up the mileage, and then hopefully I'll be able to keep plugging away with days here and there over the summer.

It's much harder to be specific about what routes I want to do as I think it will really depend on where the sun ends up shining.  If pressed, in the north I'd say I probably have more chance on something long and gneissy rather than short and sandstoney, but I'll take each route as it comes, and build up a base of fitness and familiarity with the trad faff.

Any advice or route recommendations?

Above all, I'll have to try to remind myself that it's all just a bit of fun in the end, and if I don't achieve these things it's not the end of the world.  By having a go I should get to some cool places and climb some good routes along the way.

Just thinking, there are 3-star E5s and 7cs at both of these crags, they seem like good places to start... 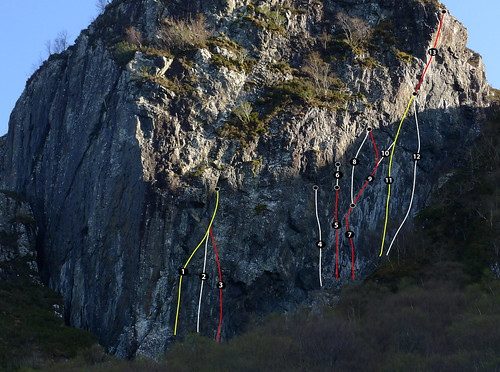 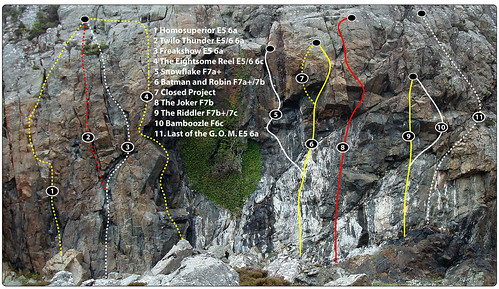 Posted by Gaz Marshall at 13:36 No comments: