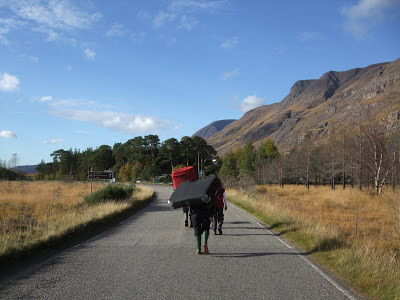 Saturday was Goat Crag with Tess, first time up there for ages, and first time on routes for about a month. Moving house and friends getting married play hell with consistent climbing. Not that I'm complaining, it's one of life's balancing acts that I'll forever be battling. I felt rusty but got stuck into Fidgy Muckers, one of the newer routes from Ian Taylor at the righthand end. Managed to throw it away a few times from the last moves, only to realise I was making it way harder by using a duff sequence. Too tired by then though. Classic Marshall puntering.

Back to Torridon on Sunday with Sarah to meet family Betts. More folk bouldering there than I've ever seen.  It's good to see the quality is being recognised but there's definitely a different atmosphere to the place when it's not just one or two mates. Guess we Highlanders are pretty spoiled.

Despite the time of year it was proper hot; tops off hot, slippery slopers hot. I consigned myself to only trying Malc's in the short spells when it clouded over and a breeze picked up. No more progress: I either need to find a way to keep a foot on for the big move or do something altogether different. The fat pebble out right keeps luring and trapping me, but there's a feeling that it could be the way. I think I need a session by myself in good nick to do some experimenting.

Rich was fresh from repeating Dan Varian's Days Go By at Kishorn the day before so happy to potter about in the heat and put chalk on problems for me. I'd not done Dandy Don's Arête or Swamp Monster Sit on the Ship so pleased to do them, then put the cherry on the cake by doing Put a Sock in it on the back of the Celtic Boulder, which I'd flailed at 2 weeks ago. Good nick and more skin this time and it felt better boning the teeny holds like a champ.

It's a rare day when Torridon allows success so a cheeky bottle of Timothy Taylor's Landlord was my reward when I got home. Livin' the dream...
Posted by Gaz Marshall at 22:49 No comments:

The illness subsided and I dragged my newly emaciated body out West for the first Torridon bouldering session of the season.  An early start for the Betts on a Daddy Day Pass meant for in-situ weather reporting as me, Blair and Nona sped through the Contin-Garve Wormhole.  News of morning dampness improving temporarily slowed the charge at Tarvie Services for a low-grade 'cappuccino' and high-grade fruit slice - the swings and roundabouts of Highland catering.

The aim for the day was to get back on Malc's Arete, and as a bare minimum to reach the high point I was reaching at the end of last season.  I did this, at least, but the top still feels distant.  I was hoping to point "Lochaber's 2nd best all-rounder" Blair at Malc's to glean some short person's beta, but we both spent the morning floundering from the slopey shelf.  Now at the stage of trying to improvise moves as the big throw seems unlikely.  Great nick until the sun came out.  Meanwhile Rich entertained crag-dog Bronners and show-boated on the Ship.  Welcome back to Torridon.

Rich then took us up to Another Level, a cool wall on one of the of tiers above the classic boulder jumble that he'd recently developed.  Twiglets, possibly the best 6A in Torridon stretches between hidden pockets and breaks left of Rich's new 7a+ Worry Bomb.  Interesting to see the shorter Blair's intricate beta for Rich's fewer long-man moves on this.  I'll hopefuly be somewhere in between but didn't really try it, too busy unearthing One Man Mexican Wave, a rare dyno amidst Torridon's techy walls.

Skin was starting to wear thin but the ego was in search of a tick so I looked out Dan Varian's new '7a' Put a Sock in It.  Classic Torridon technicality linking two teeny crimps from an off-balance ledge.  Close but no cigar.  Got home and watched Rich's vid of him doing it for beta but could never do it his Mr Spaghetti-Arms way.  Just going to have to bear down on the left crimper like a champ.

It's not often that you're forced to stop everything, to take a step back and let things be.

I can't pretend that I've enjoyed the last four days of being housebound by a viral infection, never more than a few slipper-shuffles from the loo.  Oh!  The glamour!  It struck at a fun time too, a week after Sarah and I had moved up to the lovely new place we're renting in the bright lights of Inverness, all our belongings hidden in boxes, clothes in piles on the floor, no local GP, and worse, no bed.  I've spent most of the week off work, suffering manfully, of course, and am now definitely clawing my way back out of the malaise.

My day to day life is normally very heavily based around physical exertion and discomfort: my job as an Ecologist means being away from home for four days a week, of which three are out in the field, all over Scotland.  We're often covering big distances in the hills or on very rough ground (interestingly, the roughest bit of land that I've ever had the misfortune to try to walk/wade/lollop across is in the Central Belt, miles from any 'wilderness'), or squirming and worming between prickly thickets of forestry to access specific survey points (think of trying to walk through a very tightly planted Christmas Tree farm).  We're normally carrying heavy loads of survey kit and the weather is almost never a factor in our plans; rain or shine, hot or cold, the work needs to be done.  Then I come home on a Thursday night, sort out my horrible kit and then have three days to catch up with the rest of life, as well as trying to go climbing, training for climbing, and running.  I've managed to engineer myself a lifestyle that doesn't really allow room for illness, and the machine just keeps turning week after week.

So when a few days of sickness struck, it was quite nice to be forced to do nothing and an opportunity to have a think about what I want to be doing for the next wee while.

First off, I decided that I was going to pull out of doing the OMM this year.  Training has been going OK, and in fact I'm probably in the best form I've been in for a while thanks to a summer of marching up hill with an Ecologist's rucksack all over the Highlands, but I'm just not motivated this year.  I've done it every year since 2004, and with Duncan Steen since 2006.  Each year we've been getting better, somehow managing to finish in the top ten in the the Elite Class for the last three, but this year I felt like I was entering it out of tradition, because October means the OMM, it's what I do.  It wasn't because I was looking forward to the whole race experience.  So, I told Dunc, who took it well (he'd replaced me within a few hours!) and I sprawled in the luxurious pressure-free month I have ahead.

So, Autumn is normally running season, and my climbing goes down the pan, but now I'm going to reverse it.  The rest of Autumn and Winter will be spent exploiting my new proximity to the North West's boulders and hopefully will see a few good battles on sport projects.  In the short term, I'll try to get as much sport climbing mileage as possible as I'm planning to head to Spain for a week in November.

Just need to shake off the last of this vile pox...
Posted by Gaz Marshall at 10:05 No comments: