Ben's five months old now.  We can't quite believe how fast the time goes.  Surely it was only yesterday that I came home on my own that first night, leaving Sarah and him behind in the hospital?  That was the strangest feeling: eight hours together sharing the most intense and wondrous experience that life can provide and then, by dint of hospital policy, sent home alone until visiting hours the next day.  How can life continue as normal after what we've just been through? Signs and headlamps a blur on the road back to an empty home when all my DNA is telling me it wants to be back there with them.

They tell you your life will change. You get the knowing jokes from the card carrying dads that you don't quite get. "When'll you be auctioning off yer rack then?".  All that.  But it can't be that bad, right? You just assume you'll find a way round it. It'll be different for you.

Five months in, Ben's just come through a particularly stormy patch.  His four month jabs seemed to coincide with the classic four month sleep regression and then about four weeks of colds that culminated in a bad cough that threatened to affect his breathing and precipitated a night in hospital for him and Mum.  At exactly five months to the second he was back in the same building where he was born.  Things seem to be subsiding now, only I've just been down with his same virus, caught at a low ebb of sleep loss and Dad-worry.

They were right, those card carrying Dads.  It's not different for me.

I always knew this winter would be a much more paired-down time for my climbing, but I was confident I'd still get something done: a bit of training on weeknight evenings and the odd weekend day out. I'd chalked up three problems on the west coast that I really wanted to do and if I did two of them and tried the third I'd consider it a success.  Well, it's nearly March and I've not been anywhere near any of them yet and there's no sign that things will change. A part of me despairs; mourns the loss of what I was and what I had. To be a climber, and that simplest comodity: time.

And so, adaptation. I've just had to shift my frame of reference. What's available instead? While my heart will always be with the red sandstone of the west I've put that to bed for now and have been making discoveries on the grey schists and granites of the east, compiling a list of unfound or unloved boulders within a 30 minute drive of home and slowly cleaning and climbing my way through them. It's a slow process, this development, when you only get a few hours on occasional weeks but it's keeping me focused and inspired to keep trying. There's something special about exploring your local patch, getting to know it better and better on each visit. 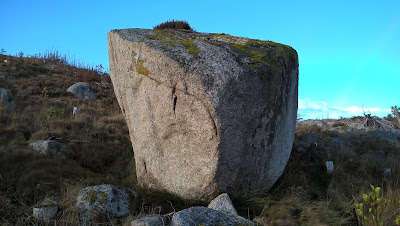 Red kites have soared overhead on every visit I've made to one venue, there must be a roost nearby.  And from the boulders I've heard the chat of dipper on the river below.  On the first visit a golden eagle passed high, heading toward the snowy sunset skyline and on arrival last time a merlin shot past as I slipped out of the car on the frozen layby. What do they make of my comings and goings? 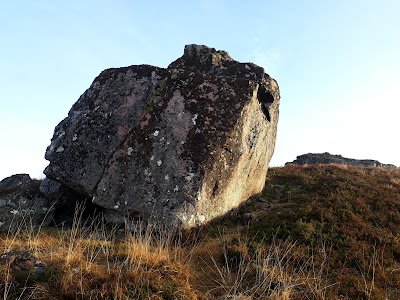 As it stands, since Ben was born I've cleaned about 15 new problems, some of which I've climbed, some are still projects. A bunch are pleasant romps in the lower grades but my guess is that the hardest might get into the 7B range, which is the hardest I've ever managed so fine by me.  That's on top of the 15 or so problems I'd already found in the last few years of exploration, again, some climbed, some projects, some still needing a clean.  They probably fit into a similar grade range again. Among them are one or two genuinely good lines that I'm sure people would be keen to repeat so I'll get round to writing them up one day. 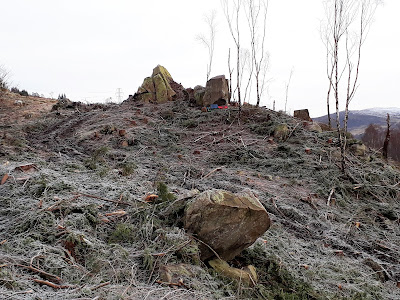 So, while time is tight and sleep is fleeting I've got my new climbing focus: make the most of what's local and hopefully one day I'll look back on this period as the time when Ben taught me to appreciate what I have to hand.

Posted by Gaz Marshall at 15:08 No comments: