If I could wish for anything in my new state as 'time-starved Dad who still wants to be a climber' it would be to find a load of brand new boulder problems close to home. In this ideal scenario the rock would be clean and quick drying and at least a few of the problems would be hard enough to take some serious trying. Well...

In the damp last week of December I went out for a drive to see what the conditions were like on the local boulders.  I wasn't climbing, but I'd been granted a pass for the next day and didn't want to waste it, so I was heading out to see whether Scatwell was likely be worth a try. I'd not been up Strathconon for months as all my recent bouldering had been spent trying (and failing on) the dreaded 'Hygge Project' on the Bus Boulder at Inchbae. I'd started to lose interest in the endless sessions of failure so fancied a change of scene. On rounding a corner a mile or so before the Luichart power station I saw that there had been a load of recent clearfelling on the slope above the road. Last time I drove down here there was an impenetrable wall of spruce right down to the road, hiding anything lurking beneath. Now, scalped, the bare slope might revealed it's secrets.  Driving a little further, I spotted a grey lump poking out from the top of a small knoll: rock!

The next day I forwent a climbing session and returned with the cleaning kit, spending a merry couple of hours scrubbing moss, digging out decades of accumulated spruce needles and trying to create some order in the chaos of fallen brash on and around the boulders.  In general though, the rock, a rough grey schist, was naturally very clean and didn't need much cleaning. By the time I'd finished I took a step back and admired, fairly happy that there was something here to return to with shoes, chalk and pads.


Over the following weeks I used my precious climbing passes to explore this little collection of rocks, emancipated from their sprucey prison.  There are 10 problems there now plus a couple of variations, mostly in the lower grades of 4ish to 6Bish, but there's a couple in the 6C-7A bracket and a still-to-be-done project that I suspect will be a notch or two harder. 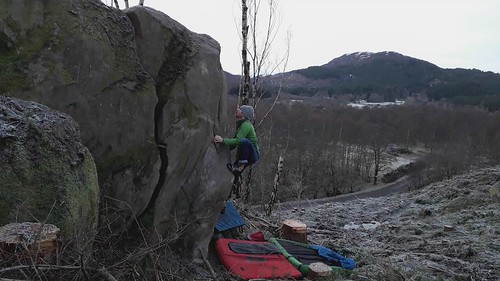 The best from day one: a nice easy arete called The Sleeping Lady (6A?), named after the skyline formed by the hills above our house, which looks like, um, a sleeping lady.


The pick of the bunch I've called Gold Dance after Andy and Lance's promise to each other in Mackenzie Crook's superb series Detectorists.  If ever they find gold when out metal detecting they tell each other they'll do a dance to celebrate, the gold dance. For me, finding these boulders at this time in my life is like striking gold. I've tentatively given it 7A because it took a fair bit of trying before I finally worked out how to climb it, but freely admit that I have no idea.  My grade calibrator is non-existent these days, having pretty much only climbed on my own problems for the last six months. I suspect that because I've not managed to train or climb as much as in the past I'm getting shitter but have no way of knowing it, so the grades may need re-evaluation... 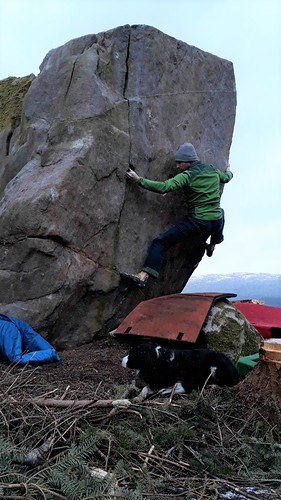 Gold Dance (7A?) squeezes between the arete and the crack.

Strathconon is hardly a popular place for boulderers to visit, but between the Scatwell Boulder, the Meig Boulders, the lone (but quality) Super Beetle problem at Glenmarksie and now this, not to mention the deep water highballs beside the Conon road bridge, it's actually a pretty cool place.

Nice blog as usual Gaz. i would love to pop up and check out your problems when i get back from Font.

Well done for cleaning these! I only just got round to checking them out the other day and was delighted to find someone else had done all the hard work! I put a top rope on the slab for Rowan (5), but we soon had to bail as the wind picked up and started blowing everything away. I did manage to cut off a couple of annoying stumps, particularly the one under your project arete. Hope to actually sample the climbing myself sometime soon!